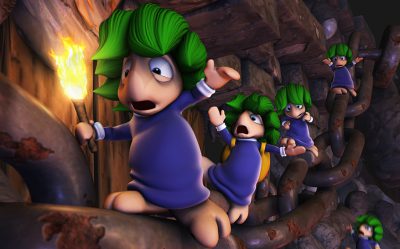 Welcome to the latest chapter in our history of Team17’s first 100 games, celebrating the release of game number one hundred, PLANET ALPHA. In this chapter, we’re heading to 2005 & 2006, a time of both 2D and 3D Worms games and our first foray into work-for-hire projects on both Lemmings and Army Men!

A second shot at the Worms 3D formula, Worms 4 Mayhem aimed to improve on the graphics engine while also throwing in a host of additions including new weapons (including the somewhat insulting “Inflatable Scouser”, infinitely customisable worms and full story mode, complete with comical animated cut-scenes.

“There was so much creativity here,” says producer Mark Baldwin. “The design department were amazing, so many cool ideas and missions. As a producer it was quite hard work, as Codemasters assigned a designer and producer to the game who had to pass on all suggestions from the powers that be, and we had to spend time batting these back. The game was well on in development when they came on board and this caused a few issues. The most incredulous feature asked for by apparently one of the Darling brothers was the ability at any point to just switch from a full 3D landscape to a 2D version of what you were seeing, like the classic worms and then flip back again!” Needless to say, this feature didn’t make it into the game. Though we must admit it would have been a technically incredible, maybe impossible, feat! 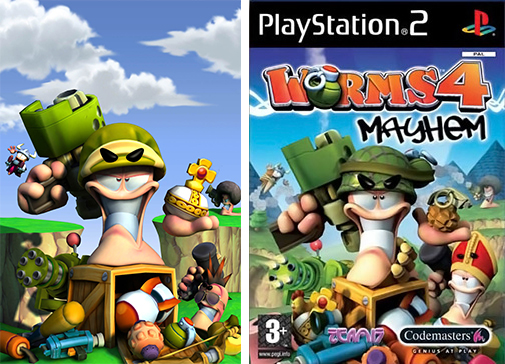 An early concept for the Worms 4 Mayhem packshot, next to the final design, both by artist Nic Gomersall.

Like Worms 3D before it, Mayhem received mixed reviews, with some players unable to gel with the 3D gameplay, though all agreed that the sequel did improve on the original. Tom Bramwell at Eurogamer called Mayhem “the best of the 3D generation” and praised it as an entertaining and humorous turn-based strategy in its own right but ultimately awarded the game a 6/10 for not being a “proper Worms”. Thankfully for him and the many other fans we know agree with him, proper Worms was only a few months away from returning…

By 2006, it had been five years since the last traditional 2D Worms game, Worms World Party. The advent of sophisticated 3D games consoles like PlayStation 2 had temporarily made 2D games less common than they’d once been but now the time was right for a comeback… 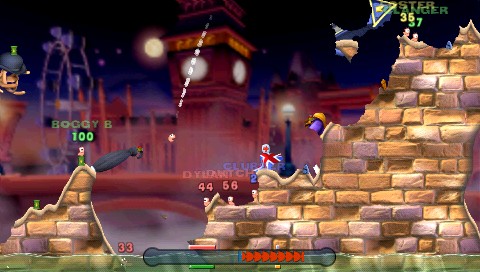 “Handhelds were becoming powerful enough to have a true Worms game,” recalls Worms Open Warfare designer John Eggett. “The PSP had a great screen which would complement Worms’ colourful and wacky landscapes. The time felt right to play worms on the go.”

At the time, Sony’s PlayStation Portable (PSP) was a ridiculously powerful handheld device, and Eggett tells us that its widescreen format “complemented the large horizontal levels perfectly” and allowed for a camera zoom to show the full battlefield across high resolution landscapes or zoom in on individual conflicts. Finally, PSP’s “ad-hoc” wireless multiplayer was perfect for Worms, allowing four players to link up and wage war on their own personal screens.

After five years off, it’s fair to say that 2D Worms got back into the groove with relative ease and the new generation of handhelds breathed new life into the game, proving that there was still an appetite for 2D games and paving the way for an even bigger 2D Worms revival that was still to come…

BONUS CONTENT: Click here to see a secret level from Worms Open Warfare, featuring the development team! Warning: Not Safe For Any TIme!

Worms weren’t the only teeny tiny critters to rise to fame on the Amiga, Lemmings by DMA Design (the same geniuses behind Grand Theft Auto) was a smash hit on the computer Team17 cut its teeth on, so we were immensely honoured when Sony invited us to revive the series on PlayStation in 2006.

From Amiga to PSP…

The Team17 interpretation largely functioned as a faithful remake of the 1991 classic, with a new lick of paint, such was our reverence for its masterful design. “We wanted to reproduce all the original levels, I also wanted them to be played in exactly the same way,” explains lead designer John Eggett. “A walkthrough from 1991 would still apply! There was no design documentation available so I had to find a copy of the original game and time how long it took to walk, how many pixels the lemming dug through, and redo the art of each level while keeping the silhouette.” 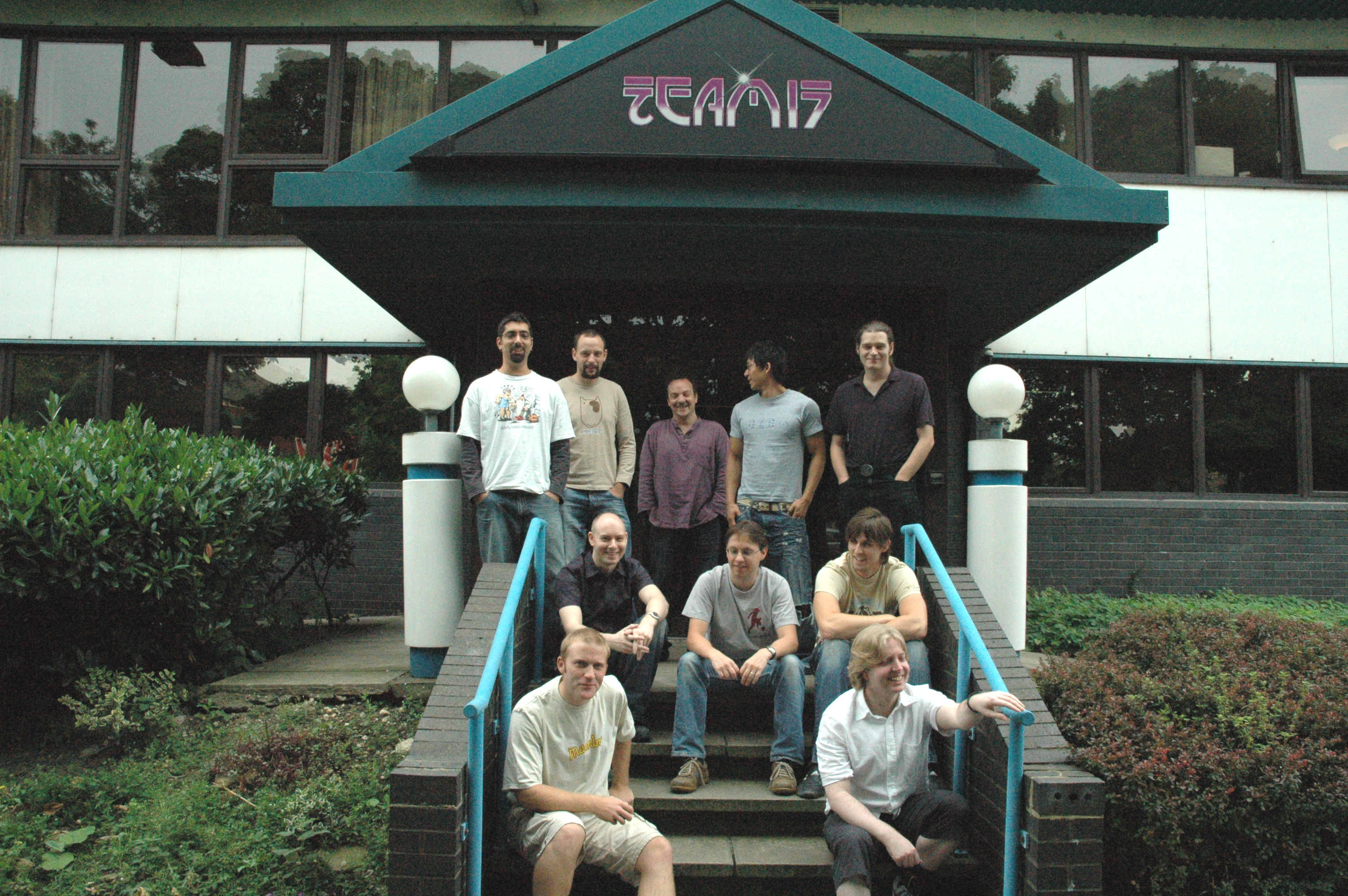 The Lemmings development team, outside our old Ossett HQ.

About five months after the release of the PSP version, Lemmings was also ported to PlayStation 2. Basically a straight conversion of the handheld game it did also include the bonus mode “Eyetoy Lemmings”, a mini game that allowed players to appear on their TV screens and have little lemmings crawl all over their bodies, arms and shoulders outstretched like a bridge… A dream come true for all Lemmings fans, we’re sure! 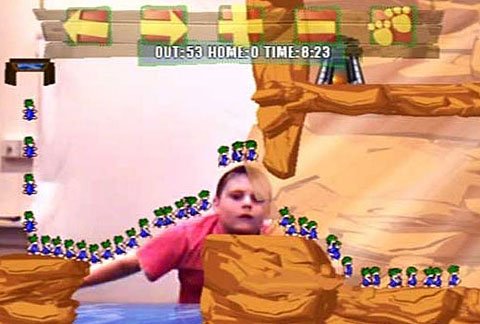 Eyetoy Lemmings in action. 12 years later, this lad is now 25 and the lemmings haven’t stopped marching across his back. Poor soul. 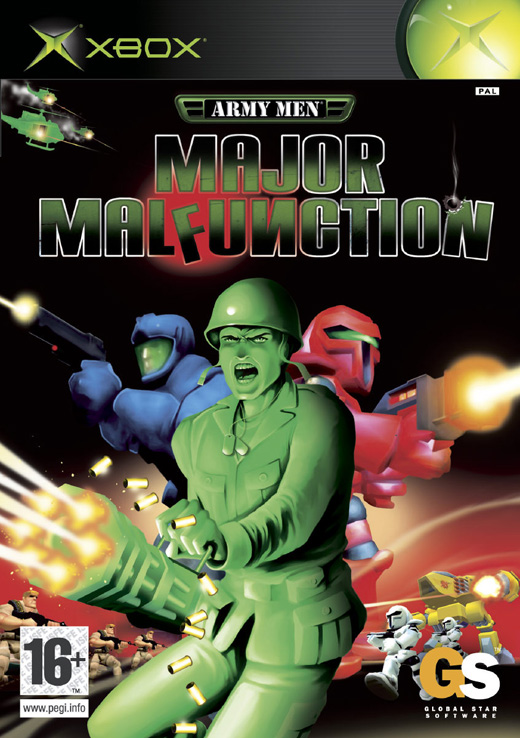 When Team17 was founded in 1990 it was entirely possible, thanks to open platforms like the Amiga, for a small group of programmers and artists to make and release their own game. But times changed. As next generation consoles took over, team sizes grew and budgets ballooned. Releasing a game was virtually impossible without publisher support and this meant you had a limited number of ways to get a game made. Either own a best-selling IP or develop for somebody else’s. In this climate, Team17 found itself pitching to publishers for “work-for-hire” projects. Sometimes this led to us working on a game like Lemmings, other times it led to Army Men: Major Malfunction… Perhaps the most surprising game in our entire history.

Recruited to Team17 after a 10-year stint at Rare, Gavin Hood found himself in command of the Army Men project and worked on the pitch. “I had literally only joined the company a few months before and was sitting opposite the head of design,” says Hood. “I remember most of the designers were working hard on a Worms title as it neared the end of production so I was asked to come up with something to pitch. I guess it went okay because we got the deal and I got the chance to lead it.”

Working on someone else’s franchise, you’d think that the publisher would have final say on any creative decisions but actually, as Hood explains, Team17 were given free rein on Army Men and even got away with a few unexpected choices. “We wanted to use a different main character to many of the other Army Men games and not only did we not meet resistance to this, but we even microwaved recurring main character Sarge in the opening sequence to set up the introduction of our own character. I’m actually proud that we were able to melt a series character in the opening of a game and everyone concerned be okay with that!” 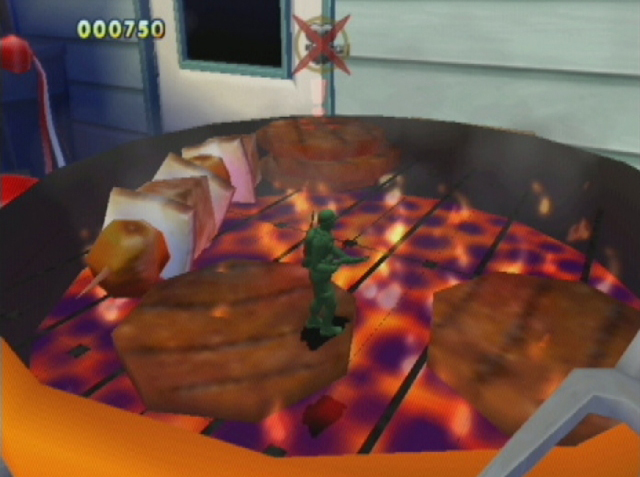 Every game has its unique challenges and for Army Men it was designing a 3D world in the era before off-the-shelf game engines made the process more streamlined. “The programmers wrote a set of tools that, because of the limited time we had, were made to work on development kits using the Xbox Controller,” Hood explains. “We had to place enemies, assign A.I. to them and set their patrols all using an Xbox Pad, even the cutscenes were done in the same way. Using those tools was a nightmare but the advantage was we could throw a load of stuff into a level and just hit play. It was awful to use with a pad but the speed at which we could test ideas and get something into each of the environments is probably the only reason we hit deadlines.”

A WIP CG animation from the Escape From Precint 17 mission

“It was an interesting game to work on,” concludes Hood. “I remember having grand ideas about what the game would end up being and although it might not have exactly reached those heights there are some things I think we got right. There are a lot of pop culture references in there that I still think we handled well .” Even the subtitle, “Major Malfunction”, was a reference to a line from Stanley Kubrick’s Full Metal Jacket!

“Looking back, the game obviously wasn’t a masterpiece but everyone on the team got everything done in a very short development time with makeshift tools! It probably won’t go down as Team17’s finest hour or be the game I’m proudest of, but I did at least get to buy a lot toy soldiers and put them all over the office!”

That’s all for this chapter. We really hope you’ve enjoyed this snapshot of Team17 history. In the next instalment, we’ll look back at 2007 & 2008, including the confusingly titled Lemmings sequel, “Lemmings” and our landmark shift into the world of digital download games – a turning point that changed Team17 forever!