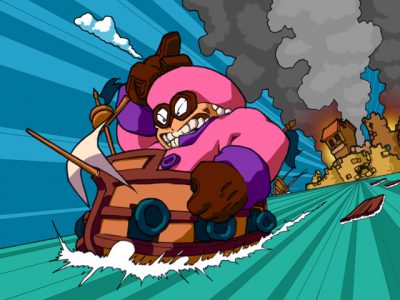 Welcome to the latest chapter in our 100th game celebration, marking the release of PLANET ALPHA, in which we’re taking a look back at each of those 100 games and speaking to the people who made them.

In this chapter, covering 2002-2004, we have four very different Worms games. Read on to hear their behind the scenes stories, catch up with the previous chapter on 1999-2001 or start right at the beginning in 1991.

“I loved working on this game,” says Mark Baldwin who was both assistant producer and lead designer on Worms Blast. “I did the game design document and then when it came around to putting the game into production, we had a bit of a staff shortage, so I got asked if I wanted to work in production too! I was really proud of how creative our designers were and that’s sort of become a hallmark of Team17. Grant Towell, Kev Carthew and John Eggett all created amazing things in the game with very limited tools. I also think that this is where certain designers’ love for puns got a hold, with level names like “This game does dragon” being a fave.” 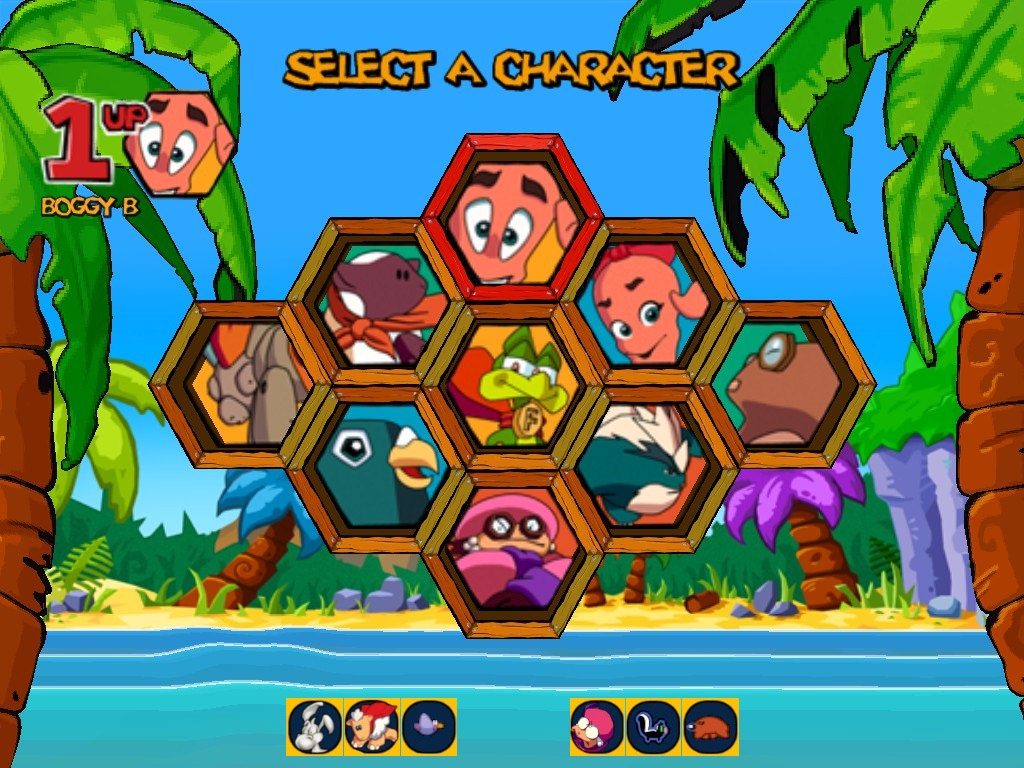 The full cast of Worms Blast. Amiga fans might recognise the unlockable character in the centre.

Worms Blast was also the last game artist Rory Little worked on before leaving for Japan to work on Shadow Of The Colossus. “I was very happy on that one, having all the 3D modelled sea creatures to make,” says Little. “They had to be made incredibly efficiently; the smallest fish were only ten polygons and still they animated! My favourite creature was the kraken, which would bubble up from the depths to harass the player in their boat and drag them down if you didn’t take prompt action.”

Those fun fish did create at least one headache for production, however. “We were trying to track down why the framerate game would slow down almost to a crawl after a few minutes in multiplayer,” says Baldwin. “We feared it was a memory leak. Turns out it was the fish AI that was messing up the performance. The programmer had designed an elaborate AI system for the fish swimming about and it nearly killed the whole multiplayer experience!” 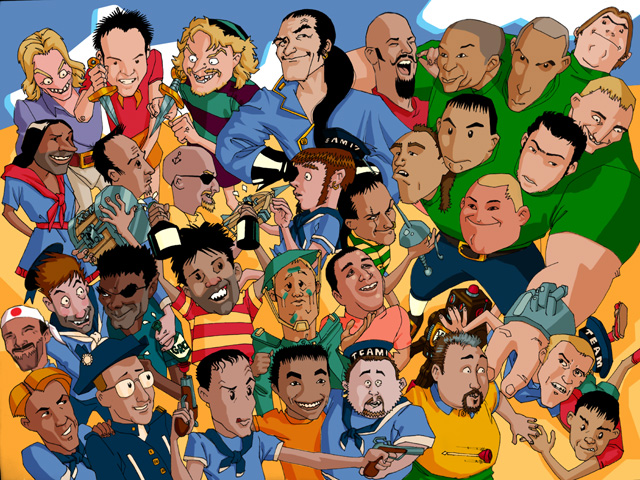 The development team of Worms Blast, as they appear in the credits.

Worms Blast ultimately split fans down the middle. Some bemoaned that it had little to do with traditional Worms gameplay, while others conceded that it was nevertheless a fun arcade puzzler with some nice ideas of its own and an attractive cartoon aesthetic. If you love puzzle games and want to play as an old lady in a bobble hat, paddling about in a boat, then this is probably the only game in history that’s going to do it for you!

Now this one’s going to be pretty tricky to look back on! This little known version of Worms was developed exclusively for “Sky Gamestar”, a pay-per-play service for UK-based digital TV viewers that allowed them to play a simple version of Worms using their TV remote. The service was discontinued in 2006 and as far as we can tell there are no surviving screenshots or video available. We’re going to have to go full oral history!

“I almost forgot about this one,” says producer Mark Baldwin. “In a lot of ways Sky were ahead of their time, but the system just wasn’t capable of making a decent Worms game. Babel Media were trying to get a way into making simple games for Sky and this seemed like a good idea. I remember it being incredibly basic and very laggy. You had to use a standard Sky remote, so you just used the arrow keys. It got finished, but then Sky decided to charge people 50p a time to play, so it didn’t do very well.” 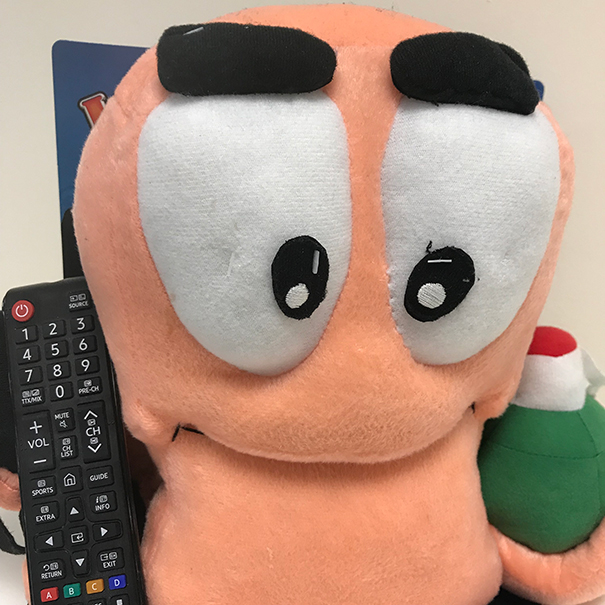 We don’t have any screenshots of this lost game… So here’s a worm with a TV remote!

Ben Paddon, creator of Team17 fansite Dream17 actually played the game back in 2002 and kind of remembers it! “My memories of it are very vague, but as I recall an effort was made to remap the entire control system onto the unwieldy Sky Digital remote, which was already something that struggled to navigate Sky’s own menu interface, let alone control a game as complex as Worms. As a concept, it didn’t quite work. It was ambitious, but the limitations of the Sky digibox just weren’t up to snuff. In many ways it felt like Worms had been ported to a system like the Spectrum, only with better graphics.”

So it doesn’t sound like we’re all missing out on a great lost Worms game but it’s a shame nonetheless that some games can disappear forever never to be played or seen again. If you do happen to have your own VHS recordings of Worms for Sky Digital, however, we’d love to see it! Drop us an email at community@team17.com and maybe we’ll trade you it for a download code!

They said it couldn’t be done! But in 2003, after several prototypes, we finally managed to make the Worms work in 3D. And the person who cracked the code was the exact same person who’d made Alien Breed 3D eight years earlier, Andy Clitheroe!

“The really big breakthrough was coming up with the ‘squishy voxels’ system to represent the terrain,” Clitheroe explains. “It had to be a system that was fast to detect collisions, fast to modify, memory-efficient and, most importantly, gave the designers the creative freedom to build the kind of elaborate levels players were used to.” 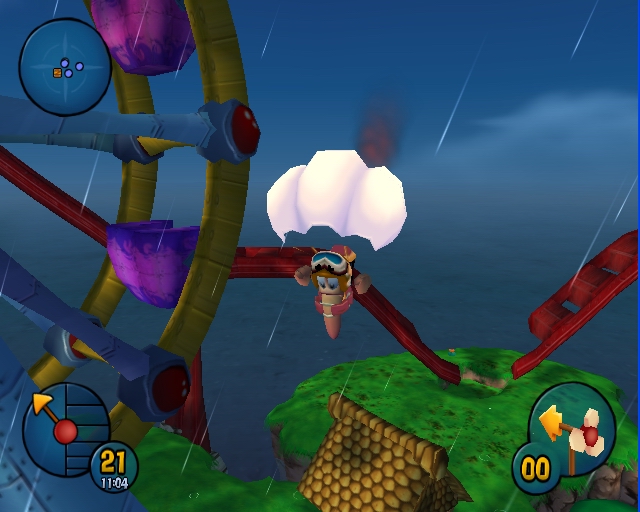 Where 2D Worms games randomly generated the landscape, Worms 3D’s levels had to be hand-designed as Kev Carthew recalls… “Because everything can be destroyed, every surface has lots of hidden polygonal faces built into them that are removed as the landscape is destroyed. We were really limited in exactly how much land we could use, because the more land we had the worse the game would run. Imagine having a small bucket of Lego to make a map. You need to spend a lot of it just to make an island for the Worms to stand on. The rest of the Lego only stretches far enough to make something like a couple of trees or maybe a hill. It gets used up quickly if you make large chunks of land, and so we had to make clever use of negative space to make interesting maps. If you look at maps like the ‘Nobody Rides for Free’ funfair, you’ll notice the footprint of the island is small, but it feels like a large map because of the tall spindly objects, like the roller coaster, that give it width and height.” 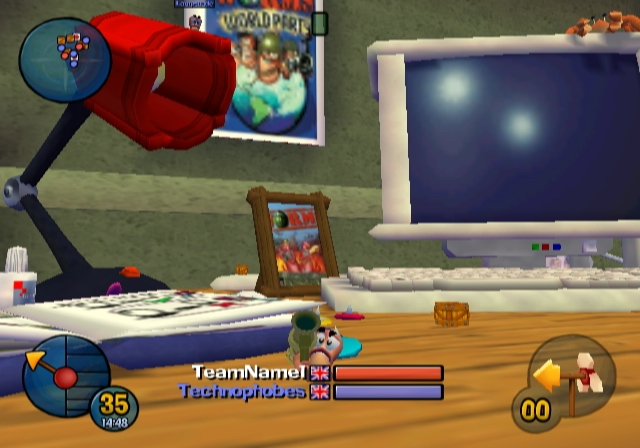 “At the time 3D games were the future and we felt 3D was the future of the series too,” adds Carthew. “It was the first step into 3D for Worms, and it felt like there was a lot riding on it. We took a lot of care to make sure it played like Worms, and tried to get the little details right. For the longest time the biggest challenge was answering the question ‘Can the player accurately judge depth in a 3D scene?’ – because if they couldn’t tell how far away something was, they wouldn’t be able to accurately set the power of a shot to hit the target. A simple prototype proved that as long as the player aimed in first person they could judge it well enough to play with a good degree of accuracy.”

Just like Superfrog before it, Worms 3D also featured a famous energy drink!

“I’m actually really happy with the final result,” says Clitheroe. “Everyone did an amazing job. When I started I’d imagined the designers using maybe ten or fifteen deformable ‘chunks’ of land to build levels – crude buildings, trees and so on. But by the end there were levels with 750+ pieces and it still ran at 60fps on a PlayStation 2.”

Though Worms 3D wasn’t universally praised (some saw the added dimension as a complication of the original game’s purity) it nevertheless remains a huge technical achievement with a loyal fanbase in its own right, and one that in our own humble opinion represents one of the great creative leaps from 2D to 3D design.

Not quite the second attempt at Worms 3D (that would come the following year) Worms Forts: Under Siege was more of a standalone expansion that added in the fan-favourite Forts mode from previous games – in which rival worm clans fought each other from remote forts in order to encourage old-school artillery play – and fully integrated it into the main game.

“The head of design at the time and some of the senior designers were playing a lot of RTS games and thought that Worms would be a good fit, because everyone knows that ancient civilizations attacked one another with 50 stone canaries and concrete donkeys,” says game designer Jax Li. “All joking aside, Worms does lend itself to weapons being launched from catapults/trebuchets and Forts enabled us to wander further down the 3D avenue, adding some nifty camera work, historically accurate storytelling and bigger explosions along the way. Okay, we just wanted to blow more stuff up…” 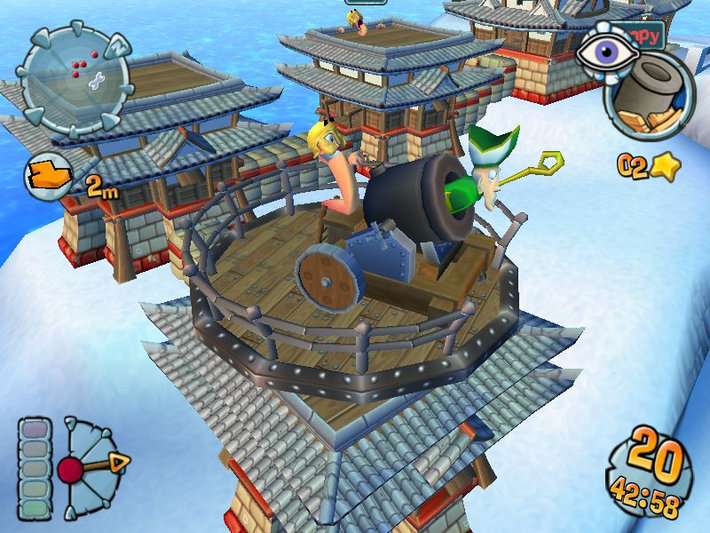 One thing that all of the 3D Worms games contributed to the series was a greater sense of cinematic storytelling as the 3D game engine was used to stage and perform comedy cut-scenes. Li was responsible for assembling these in Forts: Under Siege and gives us some insight into the process… “We would receive very short ‘screenplays’ written by the lead designer and manager and use them to create a scene in the editor. We’d use timeline events to fire text, animations particles; camera cuts when worms were talking/looking confused (usually the latter). They took a lot of tweaking but were really fun to work on, and it was satisfying seeing your cutscene come to life. The kind of feel we were going for was irreverence. Always irreverence. For example, one of the scenes where Merlin banishes the evil enchantress Morgana, he spends a considerable amount of the time conjuring up what appears to be an earth-shattering spell, to end all spells. The reality is that he just gets a hippo to run at her. No magic required.” 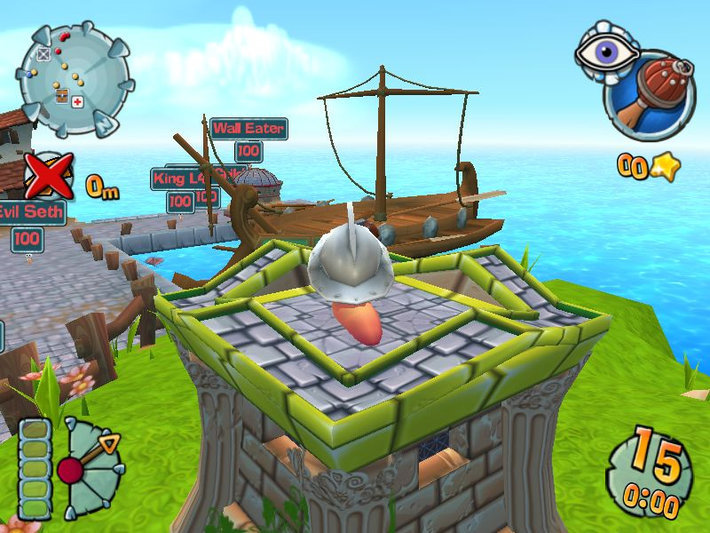 Much like both Worms Blast and Worms 3D, Forts: Under Siege debuted to a mixed reception, with criticisms common to both its predecessors. Some liked the added depth of the fort building/defence gameplay while others derided it for compounding the fiddly 3D gameplay or drifting further away from what they considered true Worms gameplay. There never was another dedicated Forts game (aside from a 2D mobile spin-off licensed by THQ) but the mode itself remains popular with hardcore wormers and was even added into Worms W.M.D as recently as last year!

Until then, why not check out our previous chapters, starting all the way at the beginning in 1991 or tell us which of our 100 games is your favourite by taking to Twitter and using #100Team17.