With the release of PLANET ALPHA, Team17 has now released 100 games! To celebrate the landmark, we’ve decided to take a look back at every single game, year by year, and talk to the developers involved in their creation. In this first chapter, discover the very first games Team17 developed on the Amiga in 1991 and 1992…

Formed in 1990 when staff from shareware house 17 Bit Software, games retailer Microbyte and Swedish developer Team7 joined forces, Team17 quickly established itself with one singular vision – to make awesome games for the Commodore Amiga computer. The first of these was Full Contact, a one-on-one fighting game with impressively detailed graphics and a wide variety of bonus training stages in between the blistering fight scenes. Released at a budget price of around £10, it received favourable reviews from the magazines of the day, who praised the sharp visuals and fast pace.

Andreas Tadic, one of the founding members of Team17 and programmer on Full Contact, explains why they went Amiga exclusive: “The Amiga was one of a kind in terms of technology. It was ahead of its time with parallel processing and its dedicated chipset for audio, graphics and sound. It was also the machine I really learned to code with, starting with Assembly and later on C, so it was the obvious choice. It was a lovely platform to work with. Plus, it was really hard to develop for multiple platforms at the time, since the hardware was very different and if you weren’t going for a poorly done port, you had to rewrite a lot of code.”

Tadic and his fellow developers – Rico Holmes & Peter Tuleby – produced a game in Full Contact that more than lived up to the “demoscene” roots from which the team originated, with cutting edge visuals and sound (composed by Allister Brimble) designed to remind Amiga owners why they’d invested in their computer of choice. This was perhaps best exemplified by the ambitious opening animation – inspired by a scene from Jean Claude Van Damme’s Kickboxer (with music reminiscent of Karate Kid), it featured a fully rotoscoped silhouette of a martial artist practising against a beautiful sunset, all drawn using the Amiga’s “HalfBrite” mode and utilising previously unused Amiga chipset technology. It remains one of the most striking and iconic images in Team17 history.

Team17’s first huge hit, Alien Breed plunged players into a hostile alien-infested space station and asked them to balance fast arcade blasting with an almost survival horror-like hunt for ever-dwindling resources. Playing Alien Breed was as exciting as it was tense and, best of all, could be played by two players simultaneously.

Critics heaped praise upon Alien Breed, with most Amiga mags awarding the game more than 90%! Not bad for our second game. “The atmosphere is great and is what catches me the most,” recalls programmer Andreas Tadic. “I think it’s a combination of the art, audio and gameplay that makes it. From a coder’s perspective it also used the hardware extensively to make it all come together.”

Much of that atmosphere was deftly established by the music and sound, provided by Team17’s first composer, Allister Brimble who scored a memorably edgy science-fiction score for the title screen but left all four of the Amiga’s sound channels free for in-game sound effects at the behest of project manager Martyn Brown. “For the alien death sound I recorded some cat meows from our newly born kittens on my new Akai S950 sampler,” recalls Brimble. “I accidentally played them back on my keyboard three ocataves lower, in a chord. It sounded like an alien!! I then mixed in an explosion sound and it ended up in the final game.” So when you next blast an alien to bits, remember you’re actually hearing the cries of cute little kittens!

Brimble’s mother and trained actress, Lynette Read, also contributed to Alien Breed as the voice of the Intex Systems computer – a firm favourite among Team17 fans. Though Brimble fondly recalls that he had to pitch shift the recordings because she sounded “a little too posh.” 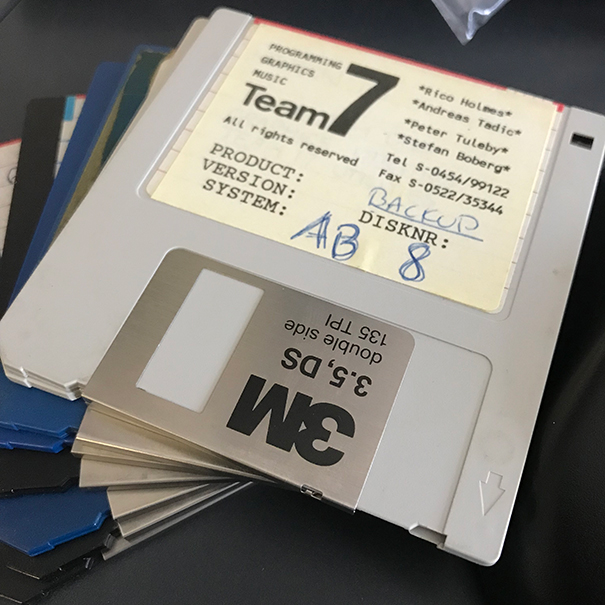 The original Alien Breed code & assets on eight floppy disks. Yes, we still have them!

Tadic tells us that Alien Breed ran on vastly enhanced technology, originally developed for Miami Chase, a pre-Team17 production published by Codemasters. “A lot of effort was put into the tools and run-time in terms of the 360-degree scroll, 50fps update and rendering. I think the main challenge was getting as many objects on screen as we had while maintaining 50fps consistently, even for two player modes and worst-case scenarios.”

The hard coding work paid off, big time! Hordes of aliens lurked around every other corner and whether running away from them or charging forward, guns blazing, Alien Breed provided a fast, frenzied and nerve-wracking experience that is still adored by our oldest fans today!

Despite cutting their teeth on computer games, Team17’s founding members were huge arcade fans. Composer Allister Brimble tells us, “Martyn Brown wanted to do the very best of each arcade genre.” So it was almost inevitable that they’d one day develop a shoot-em-up. The genre was huge in the Eighties thanks to Konami’s Gradius and Irem’s R-Type among many, many others as programmer Andreas Tadic acknowledges…

“Oh yes, I loved playing those games at the arcade and got a lot of inspiration doing so. This goes for the rest of the team as well, so it’s no great surprise we really wanted to do a shoot-em-up.

To even compete with anything like those classics, one has to remember that the Amiga was technically still far off what those arcade boards could achieve. Memory was another problem. Some typical solutions were reusing sprites vertically (for weapons and smaller objects) and loading boss animations asynchronously. You’ll notice this at the end of the level where there’s a few second gap between the last wave of enemies disappearing and the boss entry.” 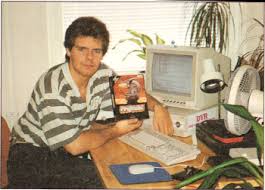 Andreas Tadic in his home studio in Sweden, with Project X

“I was asked to write a rave music track for the title theme,” remembers Brimble. “Actually, having grown up in the middle of Devon, I had no clue what this was! Luckily one of my friends sent me a tape of what it should sound like. I took a few short snippets of samples from it, then tried to turn it into my own style, and so was born the Project X title theme!”

The team’s preference for sumptuous graphics, exciting music and that all-important smooth scrolling made Project-X feel like an arcade in the home, on a computer never at all intended to run such games. Unsurprisingly, it was another big hit with critics. Among several 90%+ review scores, CU Amiga magazine called it “an outstanding arcade-quality blast” while The One Amiga’s Jim Douglas lavished four whole pages on Project-X and said “It’s easily the best all-out Amiga blaster. In fact, for my money it’s the best action game on the Amiga full-stop. And all this from a firm that were doing scrolly message demos a year ago. Major publishers should take note.”

Team17’s very first externally developed game – and perhaps the ancestor of what is now our Indie Games Label – was developed by Psionic Systems, a two-person team, run by ex-Software Creations employees David Broadhurst and Haydn Dalton. “We were working on a game for another publisher and were recommended to use Allister Brimble for audio,” says Broadhurst. “Allister introduced us to Martyn Brown, who was running product development at Team17.”

Looking back, it’s easy to see why Assassin would have been signed to the label. Its acrobatic arcade action recalled the likes of Capcom’s Strider and Bionic Commando – the Amiga conversion of which Broadhurst programmed in 1988 – and fit right into Team17’s desire to create an Amiga classic in every conceivable arcade genre. Although Assassin was compared to Strider in many reviews, Broadhurst asserts that the inspiration was more of a technical one…

“My inspiration to make Assassin came from the technical challenge of making an 8-way scrolling game that runs at 50 fps on the Amiga. The Amiga has excellent hardware but the high-performance rendering was let down by a slower CPU. There just wasn’t an easy way to scroll the whole screen and draw sprites at 50fps. It was frustrating to see much-slower consoles effortlessly scroll and place loads of sprites on the screen. Assassin used some little-known techniques to scroll the whole screen at 50fps but draw the sprites at 25fps. You would think there would have been noticeable issues running the game at two different framerates but at slower scroll speeds it was unnoticeable.”

Broadhurst’s other ambition was a design goal, “to build a platform game that allowed the player more freedom to explore the world by climbing, swinging, and feeling cool.” And this freedom of movement was what made Assassin so special. Yes, you could run and jump your way around but you could also climb just about any surface, hang from a branch or ceiling, or underneath the belly of a missile, and you could even somersault to the next grapple point at a nudge of the joystick! It was exactly the kind of fast and fluid action Amiga kids hoped for in the early Nineties and, just like the rest of the early Team17 catalogue, was heavily praised by critics. It got a 92% from The One Amiga, a 91% from Amiga Action, and Amiga Power called it “Team17’s finest moment yet.”

And if the Assassin theme tune sounds eerily familiar, then you’re not imagining things… “Yes, Team17 specifically asked for Assassin to sound like The Terminator so I took a lot of inspiration from it,” says Brimble. “I do think that a lot of the inspiration for these games came from the movies at the time, as well as arcade machines.”

Now here’s a novel concept. Nowadays, most successful games are patched, updated and lavished with DLC long after their initial release, but in the days before digital distribution, this just wasn’t possible. Or was it? Team17 hit upon the idea of releasing “Special Edition” versions of its most popular games, featuring new stages and gameplay features, as well as improvements made in response to reviews and player feedback.

“The original Alien Breed had been such a success,” says programmer Andreas Tadic, “and we could see that a quick follow-up was wanted by the players, so a Special Edition made sense. It really flew off the shelves too, so we were proved right.”

Released at a budget price, Alien Breed Special Edition boasted twice as many levels as the original, including the atmospheric new “dark” levels in which players navigated terrifying corridors by torchlight! This combination of much more content and a low price proved so popular with Amiga owners that Alien Breed Special Edition stayed in the UK charts for over a year!

Click here to read about the games of 1993, including Body Blows, Alien Breed II, Qwak and a certain amphibious hero!