The A-Z of Overcooked! 2 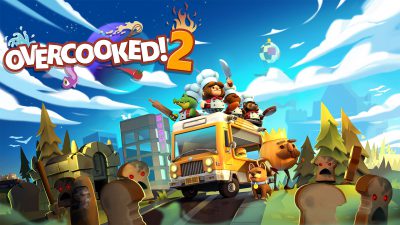 The long awaited released of Overcooked! 2 is just two days away! It’s so close we can almost taste it! While you wait patiently for its arrival, here are 26 things we thought you might like to know about the sequel…

A is for… Arcade Mode
Finished the story mode but still love playing Overcooked with your friends? The Arcade Mode is a great way to dip into some co-op cooking for a quick game. Just pick a kitchen theme and the game will load up a random stage for you to take a crack at the high score.

B is for… Boxed edition
Overcooked! 2 is available in physical form, thanks to our friends at Sold Out. Look out for it on Nintendo Switch, PlayStation 4 and Xbox One and check with your retailer for pricing. 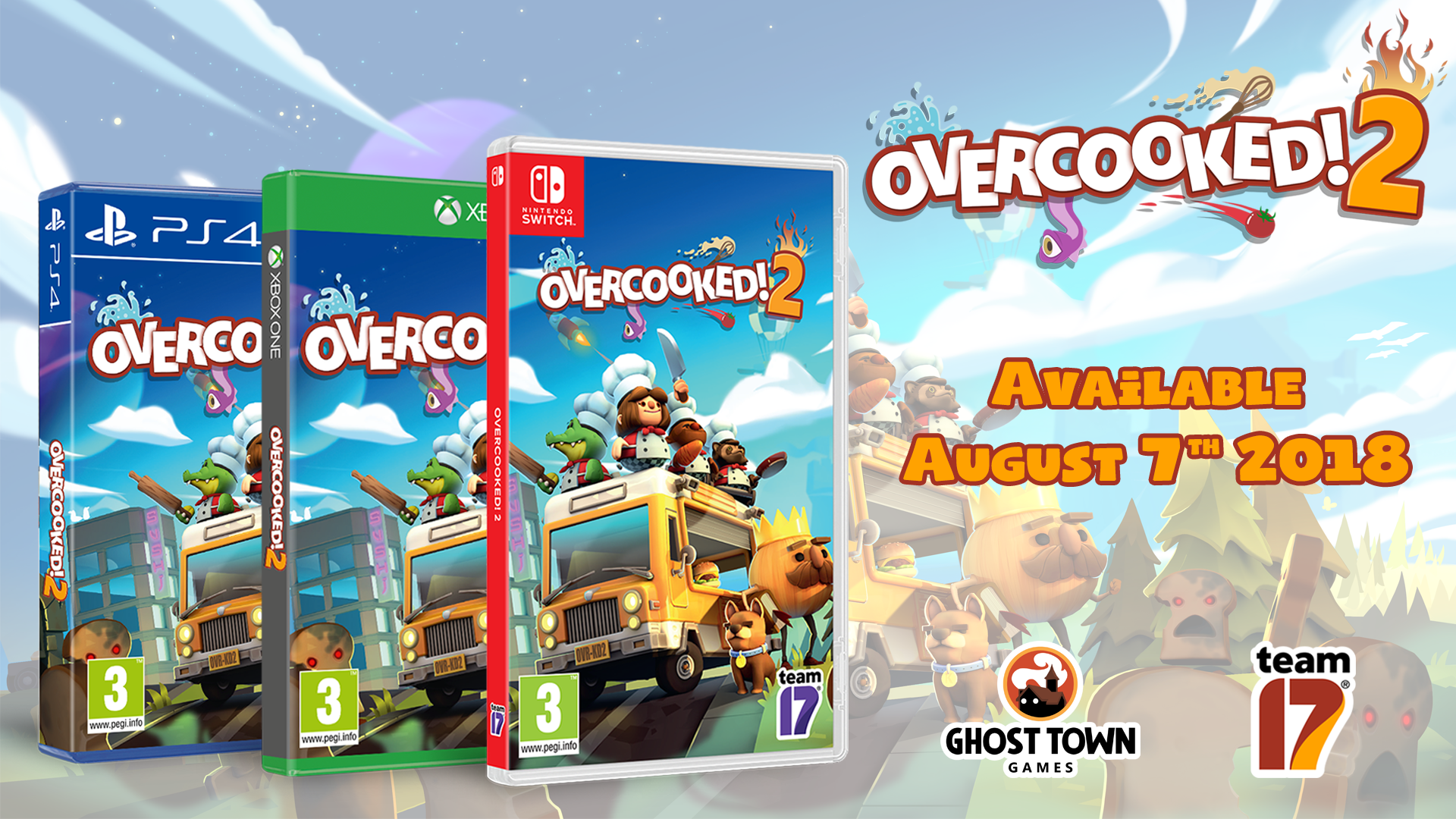 C is for… Combos
If you’re playing for a high score in Overcooked! 2 then combos are key! Complete each recipe in the exact sequence they’re ordered and your score counter will burst into flames as you rack up the score multiplier! If you’re aiming to 3-star every stage then you’ll need to nail this skill.

D is for… Dynamic Kitchens
Dynamic kitchens can move and change on the fly! One minute you might be preparing salad in a hot air balloon, the next it might crash into a sushi restaurant and you find yourself juggling two recipes at once while putting out the fires! FUN FACT: The development team were inspired by Dreamcast classic Power Stone 2 when designing the dynamic kitchens!

E is for… Emotes
Overcooked! is all about communication but we know that some players may not use voice chat online, so we’ve also created a few emotes so you can quickly give your fellow chefs a virtual pat on the back or, more likely, vent those frustrations! Emotes can be used both in-game and in the online lobbies.

F is for… Food Truck
How many developers brag about their menu screens? Well, we’re actually really proud of the main menu for Overcooked! 2. We think selecting your chef from the food truck looks great, especially when four players are all flipping through the options at once with the chef heads swapping in real time.

G is for… Ghost Town Games & Team17
While the first Overcooked! was developed by Ghost Town Games and published by Team17, the sequel is a true collaboration right through design and development. The vision comes from both studios, with Team17’s Wakefield studio undertaking the bulk of development. With the expanded number of staff comes vastly improved visuals, online play, tons of new levels and chefs and new gameplay features that just wouldn’t have been possible any other way. Teamwork makes the dream work!

H is for… HD rumble
The Nintendo Switch version of the first Overcooked! came several months after the other versions but this time around we’ve been able to include Nintendo Switch from the off as the lead platform. One benefit of this approach is that no compromises have been made on technical performance, while we’ve also been able to make use of one of the console’s most underrated features – HD Rumble. If you get a chance to play on Nintendo Switch, we hope you agree that the feel of the Joy-Con as you chop away at the ingredients is something quite special!

I is for… Intergalactic cooking
As with all Team17 sequels, we made sure to listen to feedback from our great community of players when designing Overcooked! 2 and one of the messages we heard loud and clear is that you wanted more unusual chefs and even more inventive kitchens. So, yes, you can now play as an alien and you can even cook on an alien landscape. How does cooking on an alien world work? You’ll have to play to find out.

J is for… Junk Food
Yes, yes… Healthy eating. Five portions of fruit and veg a day and 18 pints of water. We know the score! But we also love a bit of junk food here at Team17. You can’t develop a game without a little bit of pizza so it’s only right that the greatest food ever invented be present in a cooking game. We also have burgers, fries, chicken nuggets, and burritos. Yum! 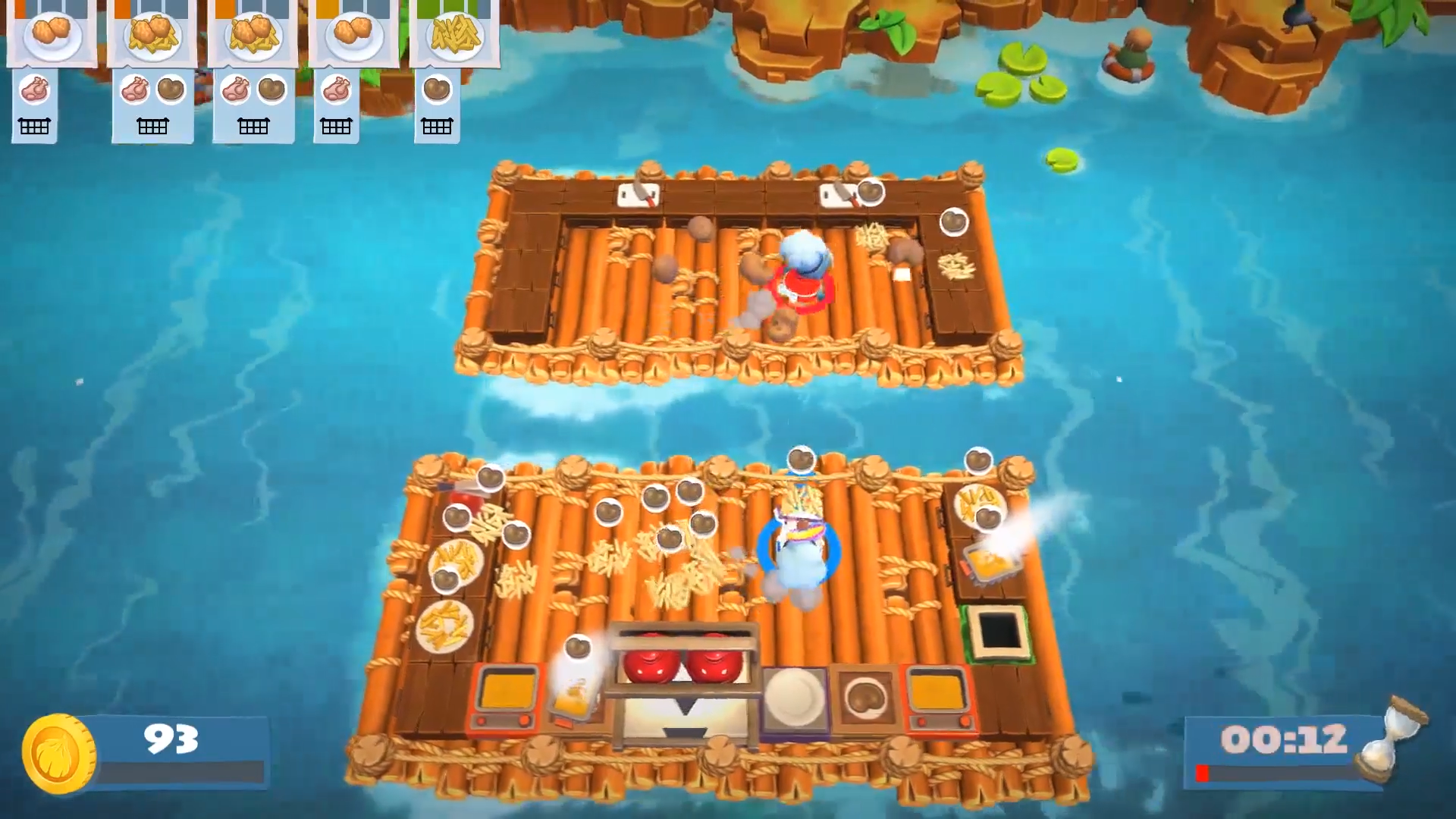 K is for… Kevin’s Bonus Stages
Complete certain secret objectives throughout Overcooked! 2 and you’ll unlock Kevin’s bonus stages! Consider these stages a little reward for playing so well and be prepared for an extra challenge to test those finely-honed cooking skills. Kevin’s kitchens are not for amateur chefs!

L is for… Local wireless play
Another unique advantage for Nintendo Switch owners is local wireless play. Yes you can play online, yes you can all share a TV or even the console in Desktop mode, but you can also play in Handheld mode, each chef with a screen of their own. If you like to play Nintendo Switch out and about, at Nintendo meet-ups or gaming events then this is a great way to play together.

M is for… More kitchens
We’re a firm believer that a sequel has to be better and bigger, so we’re proud to say that Overcooked! 2 has more kitchens than ever before – 45 in total! And each one is brand new! That’s a whole lot of cooking! 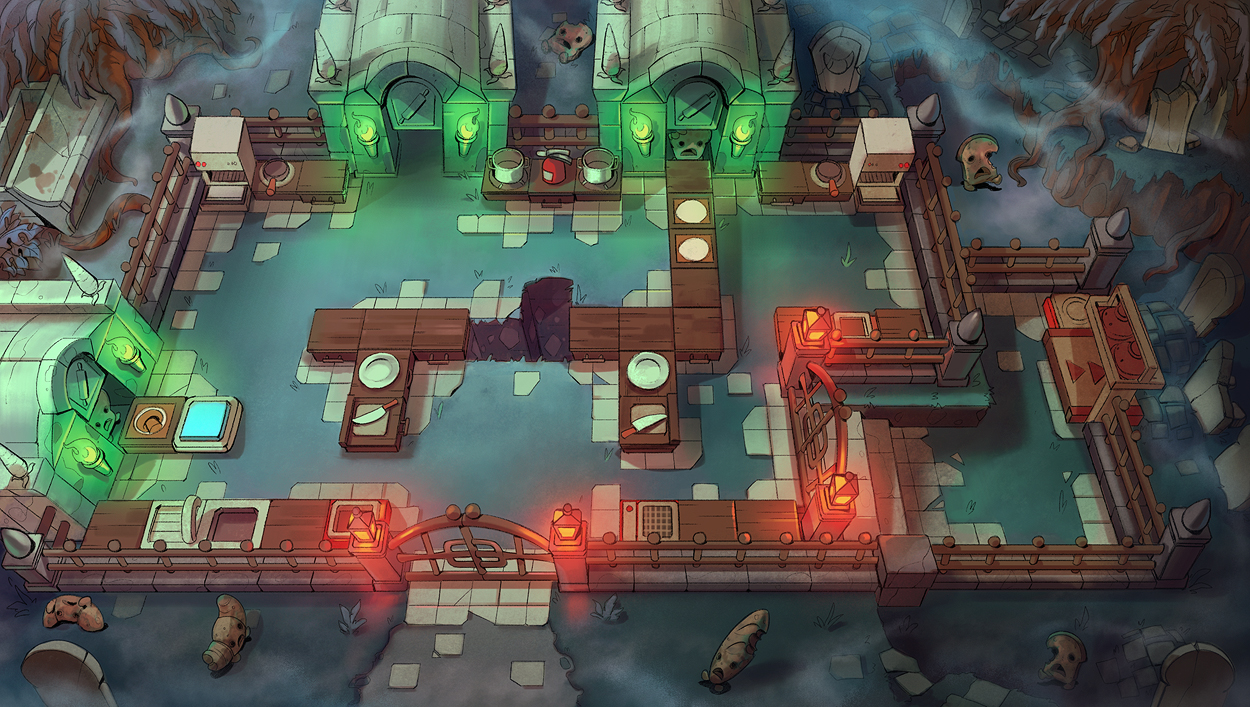 N is for… New Game +
This new mode is for the seasoned chefs out there who have achieved 3 stars on all kitchens in the game. We’ve turned up the heat and added an extra star to the score system. You’ll need to work on your strategy if you’re going to earn 4 stars across all kitchens in the Onion Kingdom!

O is for… Online Play

By far the biggest request we’ve heard from players of Overcooked! is that you wanted online play, so we’ve done just that! All modes are playable online with friends or strangers, and with full voice chat on all supported platforms.

P is for… Platypus Chef
Nintendo Switch players can get their hands on an exclusive chef – the platypus chef! Nintendo has been a great champion of Overcooked in all regions and worked with us closely on our announcement for Overcooked! 2 at E3 2018 so we thought this would be a great bonus for our passionate Nintendo playerbase.

Q is for… Quality time
Multiplayer gaming has always been important to us at Team17. Right from our early roots with the co-op blasting of Alien Breed to the heated competition of Worms, we love nothing more than seeing people brought together by videogames. And Overcooked! does that like no other game. We’ve seen players young and old cooking together and we’ve even seen people who’ve never picked up a controller before get involved. Party play is a huge part of Overcooked’s success, so while online play is the big new addition for the sequel, local co-op is here to stay and remains at the heart of Overcooked! 2.

R is for… Raccoon Chef

While everyone has a favourite Overcooked! chef, one of the most popular is undoubtedly the Raccoon Chef. Over the past two years we’ve felt incredibly humbled by the reaction to Raccoon Chef and we just couldn’t have brought ourselves to leave our furry friend out of the sequel.

S is for… Surf ‘n’ Turf
The latest DLC for Overcooked! 2 is out now! Surf ‘n’ Turf takes you to the beach for 12 brand new campaign levels, Versus and Kevin levels, new chefs and brand new recipes for kebabs and smoothies. We’ve also added a fun new piece of kitchen equipment – a water pistol. You can use this to put out fires or distract other chefs, but there’s another handy use for it too… We’ll let you discover that for yourself though! Surf ‘n’ Turf is available now on Steam, PlayStation 4, Xbox One and Nintendo Switch.

T is for… Throwing
The ability to throw your food might not make for the most hygienic kitchen in real life, but in Overcooked! 2 it’s a fast, efficient and fun way to get the job done. At first you’ll have fun trying to throw and catch ingredients around the kitchen or even lob them straight into the cooking pot, but later stages will require you to master the skill as you’re separated from your fellow chefs and have no choice but to wang a lettuce across the room!

U is for… Unicorn chef

While Overcooked! 2 features many animal chefs, the unicorn chef – available in the Too Many Cooks pack – is one of the most fantastic. We just love his fabulous multi-coloured mane! FUN FACT #2: The design of unicorn chef was inspired by a toy tape dispenser in the Team17 office.

V is for… Versus Mode
Returning to Overcooked! 2 is Versus Mode! Two teams of chefs share one kitchen and battle it out to fulfil their orders and end the round with the highest score. Do you concentrate on your own tasks or do you choose to sabotage other players by stealing their ingredients? Don’t forget, in Overcooked! 2 you can now throw those ingredients too!

W is for… World Map
The world map is back in Overcooked! 2 and we think it looks better than ever! Travel from kitchen to kitchen in your adaptable food truck, which transforms to deal with land, sea and air, and make use of the ramps to access kitchen up hills and mountains. We want every part of Overcooked! 2 to be great fun to play and the world map is no exception. We hope you love exploring it! 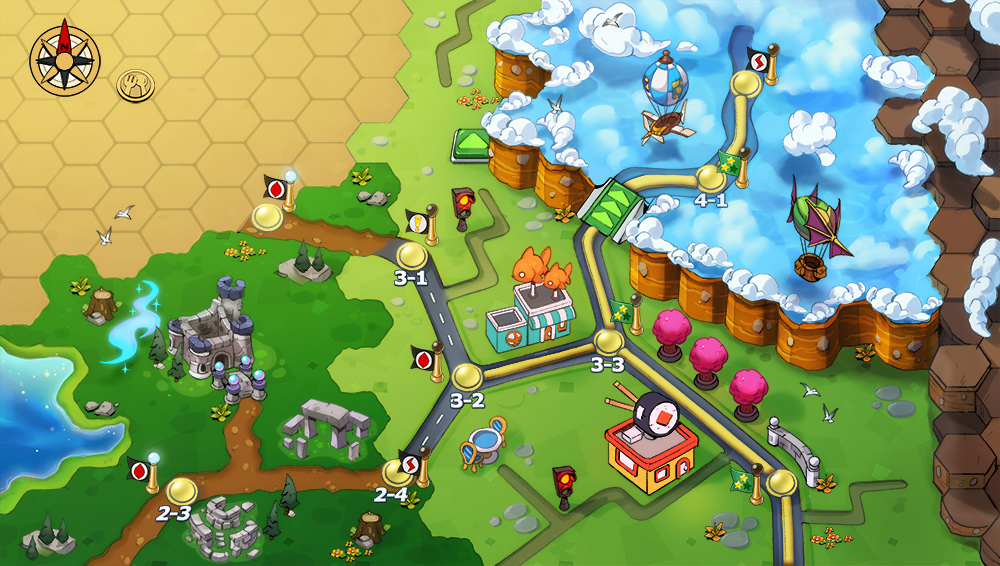 X is for… Xpert play
Yes, X is for Xpert. Please don’t argue! Now… Ever since the release of the first Overcooked!, Team17 has travelled the world, showing the game at various conventions and as the months have rolled on we’ve noticed that players just keep getting more and more skilled. We know that you’ve rinsed the first game and you’re now looking for a challenge and, oh boy, have we got some tricky kitchens in store for you! Newcomers, don’t worry. Completing each kitchen will be perfectly achievable, but if you want to ace the entire game with 3 stars on each stage, you’re going to have to master every skill at your disposal as you tackle the crazy kitchens late in the game. Good luck!

Y is for… Yummy recipes
Okay, we admit we couldn’t think of anything else for Y. But there really are some delicious dishes to prepare in Overcooked! 2. As well as the junk food and sushi we’ve detailed above, you’ll find such delectable treats as cake, kebabs, sushimi, pasta, pancakes and smoothies! Yum!

Z is for… Zombie bread?!
Players of the first Overcooked! may remember The Everpeckish as the villainous threat of the original game. But in Overcooked! 2 you’ll be facing not just one giant nemesis but a horde of unthinking, unfeeling terrors… The Unbread! Were they left in the toaster too long, or have they gone stale over time? We’re not sure what exactly turned these slices bad, but you’re going to have to stop them… Together.

Overcooked! 2 is available now on Nintendo Switch, PlayStation 4, Steam and Xbox One.