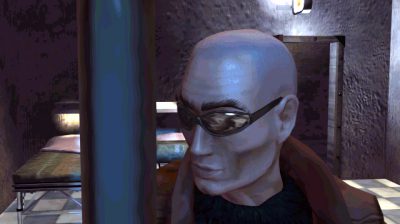 Welcome to the six chapter in our look back at the first 100 games of Team17, celebrating the release of PLANET ALPHA. In this installment we’re voyaging back to 1997 and 1998, when we released two sequels to Worms and branched out into the world of pinball and point-and-click adventures. 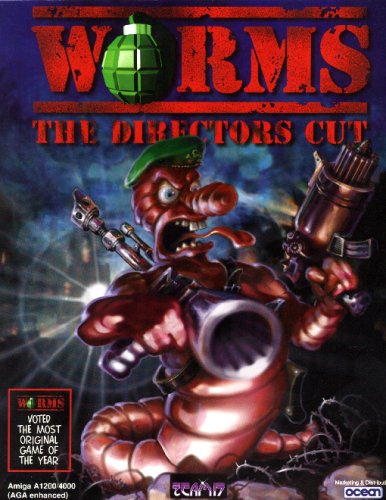 By 1997, it’s safe to say the Amiga was, rather sadly… Done. That it lasted several more years after the demise of Commodore in 1994 was testament only to the passionate fanbase surrounding the computer but as next generation PCs and consoles came in, dominating shelf space in game stores, it was inevitable that the market would come to an end some day. But at least we got to say goodbye, with an Amiga exclusive sequel to Worms…

“The Amiga’s slogan was ‘Only Amiga makes it possible’, which was very much true in this case,” says Worms creator Andy Davidson. “It made it possible for my dream of getting a game published to come true. So I wanted to give the platform the very best version of Worms I could as a thank you.”

Developed around the same time as Worms 2, Worms: The Director’s Cut was largely free from commercial pressures and served as both a love letter to the Amiga community and as a testing ground for the future of the series. “The initial focus of Worms 2 was creating the new engine and online play,” says Davidson. “Worms: The Director’s Cut let me focus on gameplay changes and additions which I felt was very important to create a worthy sequel. Worms DC served as an Amiga prototype of Worms 2 and meant all the new weapons and ideas could be slotted in, having already been proven to work and popular with Karl Morton and Dan Cartwright, who were working on Worms 2.”

Unlike the first game, Worms: The Director’s Cut was developed exclusively for the “Advanced Graphics Architecture” of the Amiga 1200 & 4000 so looked much more visually impressive, but it’s the feature set that really made this the ultimate version of the first game. 15 new weapons were introduced. “Cavern levels” were added to allow ninja-roping across great distances. Small gameplay tweaks like backward and vertical jumping were added, while new customisation tools were also implemented, like layered backgrounds that could, for example, reveal the insides of exploded buildings, or the “Graffiti mode” which allowed anyone to make their own level without the use of a tool like Deluxe Paint, simply by drawing on the screen with the mouse pointer!

Some of these experimental additions remain exclusive to The Director’s Cut, making it a particularly desirable collectible for Worms fans, but many also proved to be great ideas and returned in one form or another over the next two decades of the series. The air strike, baseball bat, blow torch, mad cows, homing pigeon, bungee, holy hand grenade, old woman, minigun, priceless ming vase, super sheep, sheep strike, sheep on a rope, mail strike, nuclear bomb and the now legendary concrete donkey… All of them first appeared in Worms: The Directors Cut.

“Worms: The Director’s Cut solidified the direction of future Worms games by having it all playable in the form of a tried and tested Worms 1,” says Davidson. “I was given total freedom to do what I wanted with it, which I really appreciated, considering the state of the Amiga market at that time. It was very much a labour of love, and I couldn’t be happier with how it turned out.”

While Andy Davidson concentrated his efforts on Worms: The Director’s Cut, another team led by Karl Morton (code) and Andy Cartwright (art) worked on the true Worms 2 – a fully featured PC-exclusive sequel that completely overhauled the pixel graphics for a more rounded cartoon look, while also incorporating online play out of the box. This was an ambitious sequel that went on to be a must-have PC game in the late 90s!

“It was a great time and everyone was out to make the very best game they could,” recalls Davidson. “I had much respect for Karl’s programming and Dan’s animation skills, and everything came together really well. As well as the new look, online play was something that suited a turn-based game very well. I was also excited for the new weapons I’d come up with to reach a wider audience.” 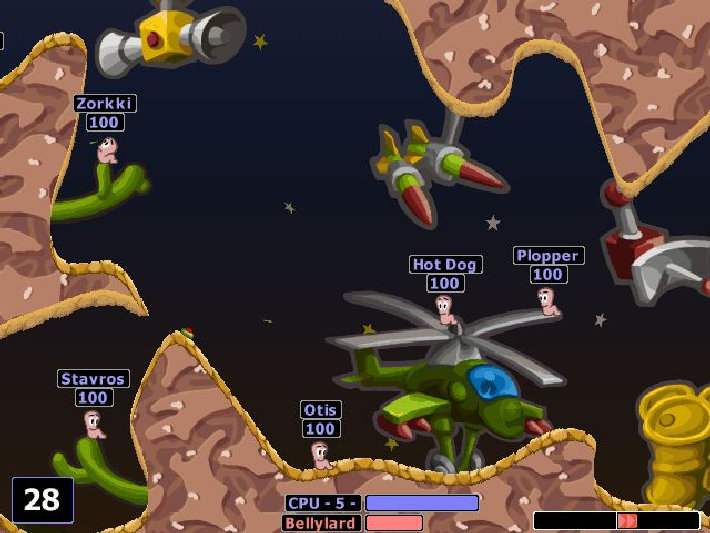 Worms 2 aimed for a “cartoon style” presentation befitting the humour of the game and boasted 14,000 frames of animation. Leaping from the world of Amiga and 16-bit consoles to new fangled PC technology had really paid off! As well as the new graphics, Worms 2 featured tons of new weapons (many play-tested and proved in Worms: The Directors Cut) a wealth of customisation options, now standard practise for the series, and even the first steps into single-player missions with simple kill-or-be-killed AI battles. 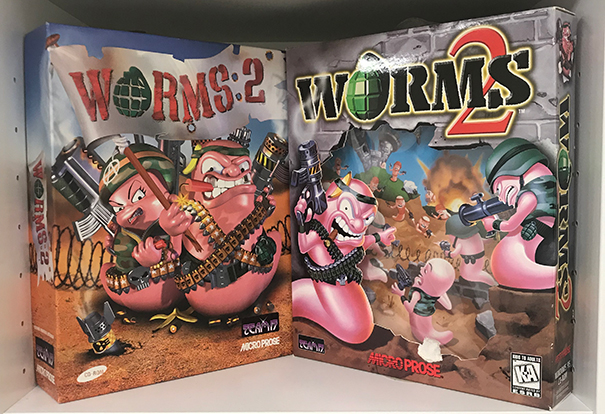 The US packaging for Worms 2 used a slightly different art style as well as an innovative acetate window to depict the hell of worm-war.

The sequel was a big hit with players and the press alike with PC Zone and PC Format awarding an 82% and 84% respectively. But the best memory from the time may have come from the increased marketing presence provided by new publisher Microprose as CG animator Cris Blyth recalls in one of the most “1990s” anecdotes we could imagine… “My brain is reminding me of an event where there was a party, someone in a Mr Blobby outfit, and someone else in a Worm outfit, both pretending to fight each other. I’m not sure where or when this happened.” Maybe it was a dream, actually.

With a fair number of pinball enthusiasts behind the scenes at Team17 it was only a matter of time before we’d create our own pinball sim using that collective expertise. And with a new fangled SGI workstation in the office, creating pre-rendered pinball tables with shiny chrome and glass effects was now tantalisingly achievable.

How did the table design hold up? Ben Paddon, over on Team17 fansite Dream17 wrote, “I’ve played more than my fair share of pinball games over the years – from the classics such as Pinball Dreams and Pinball Fantasties, in fact most of 21st Century’s great pinball sims. Addiction came out in 1998 and I still find myself playing it. Why? Simple – it’s such a brilliant game, and definitely the best pinball sim to have come out in a while. No one’s been able to top it yet.” Maybe Ben is a little biased as a Team17 super-fan but we’ll take the compliment! 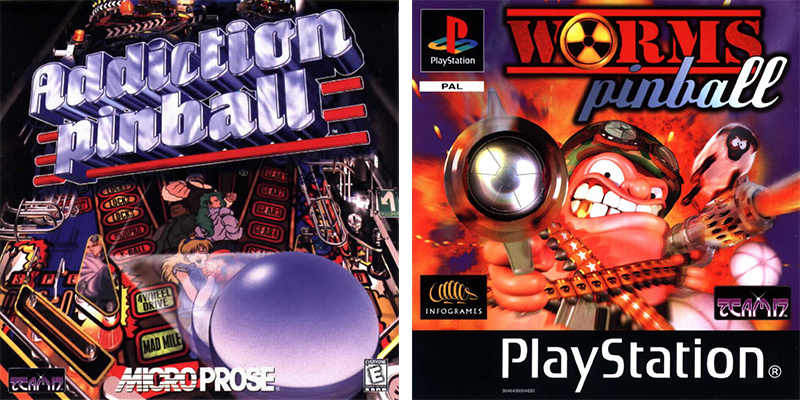 Addiction Pinball initially released on PC with two tables. One based on World Rally Fever and another based on Worms. Although you wouldn’t know that from the packaging, which featured no wording or imagery about the Worms table whatsoever. This… May have been a mistake. The next year, however, Infogrames re-released the game on PC and PlayStation as Worms Pinball, with a Worms 2 style worm and sheep very prominently featured on the cover, and this is the version currently available on Steam – sadly without the World Rally Fever table. But hey, nobody said pinball was fair!

When you’ve released 100 games in 28 years, you get to work in a wide variety of genres and one of our less well-known releases was in a game style that was widely celebrated in the Nineties yet notoriously difficult to compete in… The point and click adventure. Dominated by the likes of LucasArts and Revolution, the adventure genre had a ridiculously high watermark for quality. But, thankfully, when we released Nightlong: Union City Conspiracy in 1998, we had a secret weapon… BRUCE WILLIS!

The German release of Nightlong featured the voice talents of Manfred Lehmann, the actor who has dubbed Bruce Willis into German in no less than 31 films since 1988. This might seem trivial but was considered a huge “get” in 1998 Deutschland, where adventure games were big business, and was even called out on the original packaging! 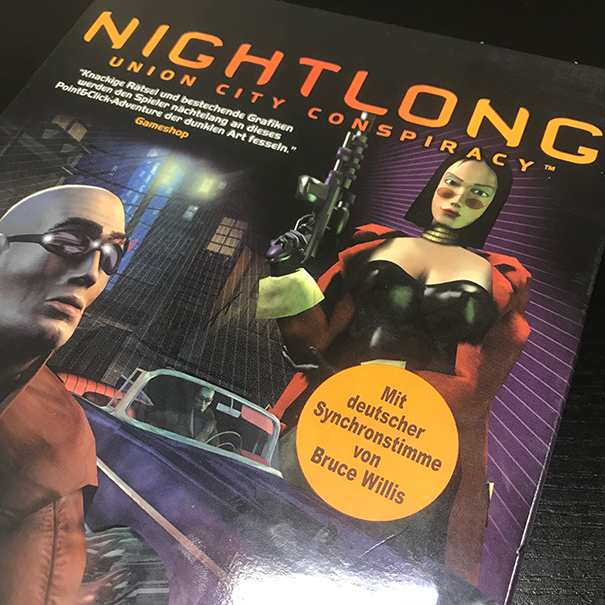 The game itself, was developed not in Germany or the UK but in Italy at a small developer called Trecision, as programmer Fabrizio Lagorio explains. “We had created several point and click adventures before Nightlong. We were fanatical about Lucasfilm adventures like The Secret Of Monkey Island, Maniac Mansion and Zak McKracken and longed to create our own adventures. So we developed a game engine and improved it each time we released a new game. We were a small developer with some successful titles and we were looking for an international publisher. Team17 was looking for interesting games and we started collaborating with them. They joined mid-way through development and assigned us a product manager. They visited us many times in Italy and we took many important decisions together.” 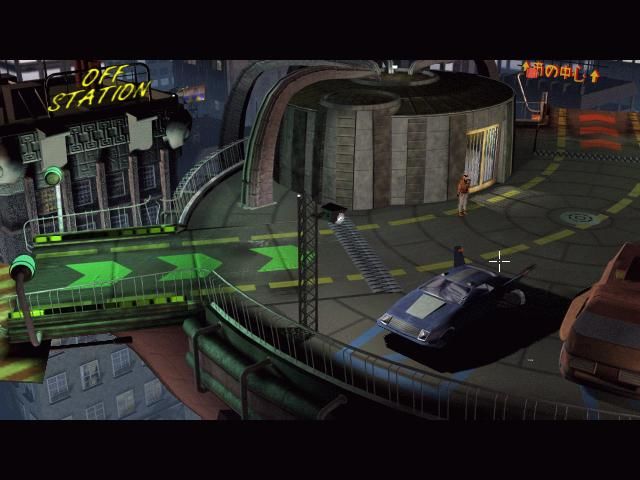 Nightlong was pretty ambitious by the standards of the day. This was an era when even the masters of the genre were still getting their heads around 3D (LucasArts released their first 3D adventure, Grim Fandango, the same year) so Nightlong was quite an undertaking for a small studio. “The game was really big: three full CDs of data,” says Lagorio. “It was considered a very big production for the time. We’d developed similar adventures in the past, so we were able to push our technology to the limit and we got great results. As Lead Programmer, I remember I found a very nice trick to fully animate environments using as little memory as possible: a static hi-res image as a background and a movie as a layer with alpha transparency over it, then the 3D real-time character. The result was very impressive.” 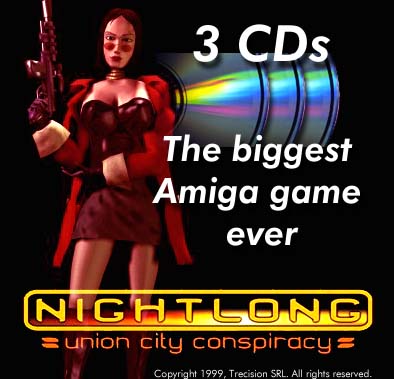 Remember when we said Worms: The Director’s Cut was our final Amiga game? Well Nightlong was actually converted to Amiga in 2000 by ClickBoom. But it wasn’t a Team17 release so it doesn’t count. 😛

Though now an obscure and forgotten release, Nightlong was a pretty good cyberpunk adventure that remains worth seeking out if you’re an avid follower of the genre. Adventuregamers.com, the biggest community of, well, adventure gamers awarded Nightlong a respectable 3.5/5, praising its graphics and story. While over in Germany, the game predictably proved popular with GamesMania.de saying “Auch wenn das Flair einer Großstadt nicht aufkommt, spielerisch ist der Team 17-Titel fordernder als Blade Runner.” Which we haven’t bothered to Google translate, but it mentions Blade Runner so let’s just assume it’s positive!

That’s your lot for 1997 and 1998. Join us in the next chapter on 1999-2001, featuring a few more Worms games, the sequel to Arcade Pool and space shooter Phoenix. In the meantime, why not check out the previous chapter on 1996 or take to Twitter and tell us your favourite Team17 game using #100Team17.