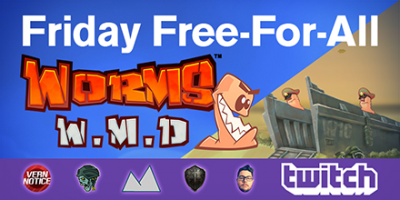 Starring: BragoonTV, Fairlight_Excalibur, GoldGlove, TheChief1114, and VernNotice you won’t want to miss this epic showdown so make sure you tune in!

The Liberation free content will be available for free to all Worms W.M.D players on Xbox One, PlayStation 4, PC, Mac & Linux from December 7th!

• 5 new single player levels to conquer!
• New drillboat vehicle! The first aquatic vehicle to be added to the series with a deadly drill!
• 4 new weapons including the Mischievous Drone, W1 Anti-Vehicle Rocket, Tasty Worm Lick and Worm Stinger!
• New theme to battle upon including new buildings and tunnels to explore!
• 12 new customisations to adorn your worms with from the Bicorne and Beret to the Cheese hat and Rubber Glove!

The battle has only just begun…