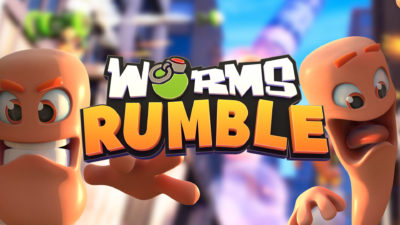 Worms Rumble has just landed on PlayStation 4 + 5 with PlayStation Plus! It also launches today on Steam at 4PM GMT/11AM EST. See below for a full list of launch times.

Don your jet pack and thrust yourself into the first ever real time Worms game! Take on epic 32 player battle royale or deathmatch modes right now! Plus get into the action quickly with matches with crossplay with other platforms. 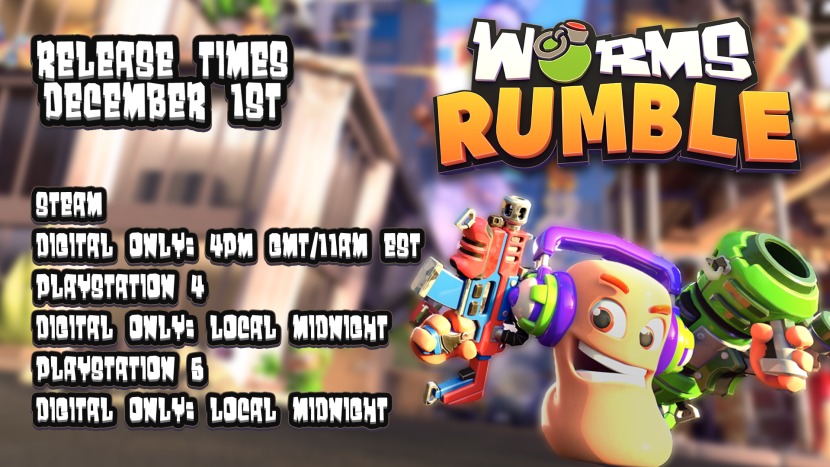 Here’s some more of the action you can expect of Worms Rumble:

Take on the battle royale mode in Last Worm Standing or with 2 friends in the Squads mode. If that’s not your cup of tea you can roll into the death match mode and hone your skills whilst respawning straight back into the action if you stand too close to a blossoming banana bomb.

As of launch there are 3 maps designed full of funny references, iconic landmarks and strategic areas to get the upper hand on opponents. The maps can also have the chance to transform mid way through the battle with missile launches and even portals opening to shake up the match.

Equip a Whole Host of Powerful Classic and New Weaponry!

Wield classic weaponry from the Worms series, like the devastating holy hand grenade and also equip yourself with completely new guns like the projectile bouncing plasma launcher.

Customise Your Worm to the Max

Don’t look like a basic worm… well actually you can but if you want to really get ahead on the worm walkway then there’s so many options open to you! Felt like a dinosaur on the outside but on the inside you were worm… don’t worry we’ve got the outfit for that! Plus, match many accessories to get a completely custom look. You will get xp in the matches to unlock new tiers of outfits and customisations to how you are presented in the game!

Don’t Wriggle Around the Maps

In Worms Rumble, movement is key! Roll around the map to speed up and also scale walls with extra jumps but be careful as you’ll need to carefully manage your stamina! Also, find classic equipment to give you an extra edge like the jetpack and utility belt which can take you to the skies!

Skill Up and Gain Advantages Over Foes

This is just the beginning!

We hope everyone has an amazing time jetpacking, grappling or rolling around the map and blasting foes to become the last worm standing! This is only the beginning for Worms Rumble! New content, events, customisations and much more are planned for the game with regular updates planned.

Keep up with everything Worms Rumble: