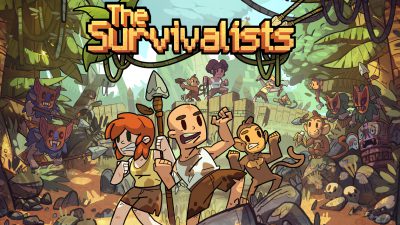 This is my first entry, date unknown. How long was I at sea?

I finally washed up on a golden shore and first impressions made it seem like an abandoned island. The waves washed up onto the beach, with lush fauna beyond. The only creature in view was a shark just off the coast, and was that the shadow of a fish..? My stomach cramps with hunger. Am I hallucinating?

Survival was my priority. I needed materials to make tools, which would help me fish and hunt for food, and so, I started to explore.

It wasn’t long until I started to find hints of some life on the island. A cut down tree here, prints on the ground there, I even found a couple of drawings, the first being what seems like another survivor being chased by a tiger.

And another picture of other survivors fighting a boar.

I was excited to find that I might not be alone here after all. I really hoped that they are all friendly, but first I needed to explore some more.

I managed to find a cave, but when I peered in, it was too dark without a light of some sort. I decided to come back to this later, but it wasn’t long until I stumbled upon a village. I peered through the foliage to see some strange inhabitants that looked like…orcs?

I slowly approached as to not startle them, but their inhuman appearance became more apparent with each step. They turned, sneering and growling. No time for niceties as their hostile nature manifested into swipes and stabs towards my body. I dodged, I hid and I ran as they hunted me down, tracking my every move like an apex predator. I managed to make a break for it, my lungs heaving as I escaped with my life…for now.

There did seem to be a mixture of different types of orcs. Some wore some masks, others didn’t. What are they doing here? Are they all hostile? Why do these otherworldly creatures want me dead?

Finally, while trying to find my way back to the coast, as I had gone inland to explore… I found some ghostly apparitions, wandering around… I steered clear as I didn’t want anything to do with it…

I do wonder though, what else is on this island? What other beasts and creatures are there to find? Is it all hostile? Can I escape this island? I have many questions… maybe the answers will come another day.