The Escapists 2: Pocket Breakout Out Now on iOS and Android 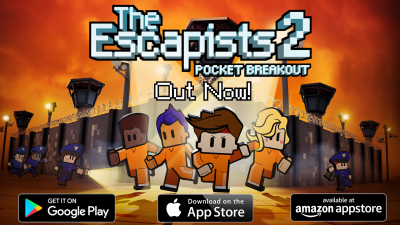 Today we’re excited to announce the launch of The Escapists 2: Pocket Breakout on iOS and Android devices. This mobile version of The Escapists 2 lets you experience the life of a virtual inmate as they (fake to) adapt to prison life all while planning their escape! Attend prison routines, complete jobs and favours, beat up guards and fellow inmates and loot the items you need to make your way to freedom!

The Escapists 2: Pocket Breakout is available on the App Store, Google Play and the Amazon appstore now.

The Escapists 2: Pocket Breakout supports drop-in/drop-out local multiplayer allowing you to play with fellow escapists each on their own mobile or tablet device. This allows you to very easily jump between solo-play and co-op any time you want.

To celebrate today’s launch, we’ll be livestreaming the game over on The Escapists Facebook page at 4pm GMT today. Join us and get your questions answered in chat!

See you on the inside!