The Glorious Regime added to The Escapists 2: Pocket Breakout via FREE update! 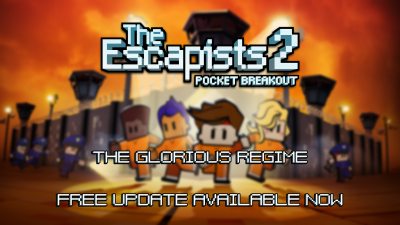 Beyond the addition of The Glorious Regime prison, today’s update also fixes a number of bugs. Please find the full patch notes below.

If you’ve yet to pick up The Escapists 2: Pocket Breakout, it’s available on the App Store, Google Play store and Amazon Appstore.

Quiver before The Glorious Regime!

Despite the towering walls, electric fences and the fact that you can’t leave, you should be thankful to be serving time here. The Glorious Leader sees and hears all. Every day you must attend roll call in the shadow of his almighty monument!

Experience the thrill of escaping the hidden compound deep in the jungle. You’ll need determination and drive to avoid the unquestioningly devoted guards, constant surveillance, and the illustrious Leader himself, in your bid for freedom.

And remember to praise your Glorious Leader!