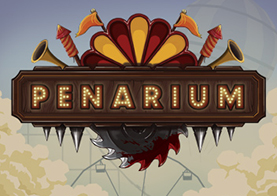 Industry veteran Team17 is continuing full force ahead with the global expansion of its third-party publishing program. Today they have announced their partnership with Netherlands based independent developers Self Made Miracle and together they will be releasing the fantastically sadistic circus extravaganza Penarium onto PC later this year.

“We are really excited to work together with Team17, with over 24 years of experience as an indie developer themselves we feel like this is the right place for us. Not only are they experienced with publishing games but they understand both the human and technical aspects of development culture as well. We grew up playing the first Worms games and have always been inspired by their game design; instantly accessible basics with a whole lot of varied weapons, each of them providing a different mechanic on their own. This is the foundation of Penarium’s game design and we feel our game fits right in their lineup of fun and somewhat quirky games,” said Rick van Ginkel, Game Designer and Producer at Self Made Miracle.

Debbie Bestwick, Team17’s Managing Director added, “We’re thrilled to take our third-party publishing program global. We’re extremely focused on disrupting traditional publishing and helping indies with the wealth of experience and knowledge we have to offer. The team at Self Made Miracle is incredibly talented; Penarium fits absolutely perfectly within our growing lineup of fantastic independent games. Ever since we received the first build of the game we’ve been competing internally for the highest score and we can’t wait to take on the world at launch, see you on the leaderboards!”

Penarium is a frantic 2D arena arcade game where you take on the role of our quirky antihero; Willy. Willy is trapped in a crazy circus show where he needs to run, jump and avoid an array of killer death-traps while being cheered on by a sadistic crowd that’s out for blood; his blood. Survive the ever ongoing armada of destruction for as long as you can and crown yourself champion of the Penarium!

Penarium is scheduled for a 2014 release on PC.