TEAM17 RECOGNISED WITH A PRESTIGIOUS QUEEN’S AWARD FOR ENTERPRISE 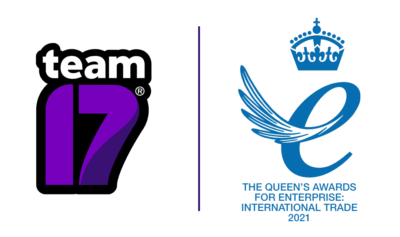 We’re thoroughly delighted to reveal that Team17 is a recipient of The Queen’s Award for Enterprise for International Trade. Now in its 55th year, The Queen’s Awards for Enterprise are the most prestigious business awards in the country, so it is a real honour to be recognised, especially as every winner has to be approved by Her Majesty.

“It’s an honour for Team17 to be recognised by Her Majesty and to be a recipient of The Queen’s Award for Enterprise for International Trade,” said Debbie Bestwick MBE, Chief Executive Officer, Team17. “In 2020, we celebrated 30 years since Team17 was first established. During that time we’ve become known for encapsulating the spirit of independent games around the world, from our early successes like Alien Breed to our beloved Worms franchise, and over more recent years for our award-winning efforts as an independent games label for globally popular games including Overcooked!, Blasphemous, Hell Let Loose, and dozens more.

“Receiving The Queen’s Award for Enterprise for International Trade is humbling recognition of those efforts, and further adds to our determination to build upon our success in the years ahead.”