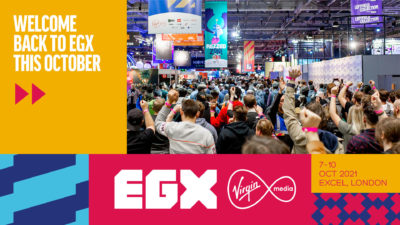 We’re excited to announce that we’ll be at EGX 2021! This year’s event is being hosted at the ExCeL in London from 7th – 10th October.

If you’re attending the event this weekend, stop by our booth for first opportunities to play new and upcoming games, including a first hands-on demo of challenging action RPG Thymesia,  and mesmerising RPG hack and slash, Batora: Lost Haven.

We’ll also have a few fan favourites with us, including Overcooked! All You Can Eat and Blasphemous. PLUS, Alien Breed will be making an appearance to celebrate its 30th anniversary this year!

Here’s the full rundown of what we’ll be showcasing…

Launching into Steam early access on 7th October, Age of Darkness: Final Stand embraces everything fans love from the survival RTS genre with a dark fantasy twist. The game utilises ‘SwarmTech’, internally developed technology allowing up to 70,000 enemies to be rendered on screen in game at any point, and with each run offering up a unique experience, players will find themselves pulled back into The Veil time and time again.

Thymesia is a punishing action RPG that sees players step into the shoes of Corvus, a half-human, half-raven hybrid with the ability to reave plague weapons from his enemy and use them to devastating effect. Fighting through a plague ravaged world, Corvus’ use of precise parries and ferocious attacks will be needed in order to survive the plague-ridden world and recover Corvus’ lost memories when it launches on Steam on 7th December.

Set following the events of a global disaster on Earth, Batora: Lost Haven is launching on PC and consoles in 2022 and will take players on an emotive adventure across the stars, with a rich and branching narrative of choice and consequence that will change the destiny of the universe. Batora: Lost Haven also combines hack & slash and twin-stick shooter combat mechanics tied to separate physical and mental health bars for deep strategic and tactical gameplay.

Available now on PC, Nintendo Switch, and next gen consoles, Greak: Memories of Azur sees players join siblings Greak, Adara, and Raydel as they fight to escape their homeland from a deadly invasion in this enchanting puzzle platformer accompanied by hand drawn art and animation and a live orchestral soundtrack.

Overcooked! All You Can Eat

First launched in 2020 on Xbox One, PlayStation 4, Nintendo Switch, and PC, work solo or with up to three friends in this fast-paced, local multiplayer, zany house removals firm set across the colourful town of Packmore, as they try to move furniture efficiently and creatively from point A to B across the 50 levels.

Rogue Heroes: Ruins of Tasos takes players on a journey across the land of Tasos and into the depths of challenging, procedurally generated dungeons located throughout the world. Gems earned during dungeon runs can be used to rebuild players’ hometown of Intori, which in turn grants access to upgrades that can improve your warriors as well as unlocking other classes and equipment. Rogue Heroes is currently available on PC and Nintendo Switch™.

Nearing its 30th birthday in November, having originally launched on the Commodore Amiga back in 1991, Alien Breed is a top down, one to two player classic arcade shooter that sees players work their way through levels, slaughtering enemy aliens along the way.

Dwarven mining simulator Hammerting is currently available in Steam Early Access, with the full launch planned for 16th November. Hammerting follows a community of dwarves as they explore, build, craft, and mine to develop their stronghold. From humble beginnings with a handful of dwarves, develop their base to unparalleled depths underneath the mountain range, as they send valuable resources, weapons, and supplies to the surface.

Hokko Life launched into Steam Early Access earlier this year and gives players the freedom to design each aspect of their charming new home, customising everything from the wallpaper and floor designs to the size, shape, and angle of a chair cushion, players will be able to create their perfect laid-back life in Hokko.

Honey, I Joined a Cult

As architect of a new and groovy cult, players design everything from the ground up, from the deity they worship to the location of the energy spa; no detail is too small for the cult leader to decide. Running a lucrative cult is no easy feat though: the leader’s ego, local law enforcement, government agencies, and angry protestors all threaten the all-important bottom line if not managed correctly. Honey, I Joined a Cult is currently available in Steam Early Access.

Available on PC and current gen consoles, Blasphemous will see players trapped in an endless cycle of death, joining the Penitent One as he hacks and slashes his way through Cvstodia, attempting to free himself of his anguish. A combination of devastating combos and brutal executions will be needed to smite the hordes of grotesque monsters that haunt the gothic inspired world.

Heading to EGX? Be sure to tag us in any photos or videos on social media!