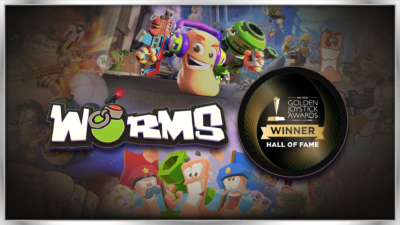 We’re excited to announce that Team17 and the Worms series have been inducted into the prestigious Golden Joystick Awards Hall of Fame!

The announcement came just a matter of days before we celebrate our 30th anniversary – and days after Worms marked its 25th anniversary.

“I’m so proud that Team17 has been co-inducted into the Golden Joysticks Hall of Fame in our 30th year alongside our beloved Worms,” said Debbie Bestwick MBE, Chief Executive Officer, Team17. “Over the past three decades, and even more so over the last several years as a games label, we’ve strived to embody the spirit of independent games.”

“We’ve delivered incredible experiences across multiple genres and worked with some of the best up and coming and established indie developers around the world. I want to thank every Teamster and every partner for their hard work, and for their continued efforts in helping us make great independent games that engage and excite, and to all the players for supporting them.”

The Worms are making their next appearance in Worms Rumble, which launches on PlayStation®5, PlayStation 4, and PC on 1st December. The game will be available on PlayStation Plus throughout the month, allowing millions of subscribers the chance to jump into the real-time action for free!