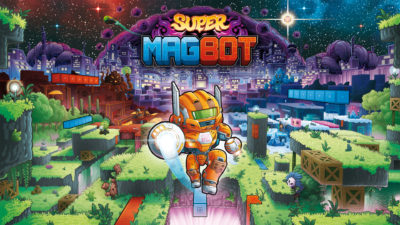 It’s time to experience a platformer where you cannot jump!

How does the demo work?

In the demo, you will be able to access the first 15 levels and a timed set of harder levels from later in the game, with players able to head back into these challenges multiple times to try and beat their score. Using the hashtag #RUMagbotEnough, we hope you can share their scores with others on social media to see who can be THE Super Magbot!

Can you tell me more about the game? This sounds like a challenge!

Are you ready for the challenge?

Play the Super Magobt Demo today by visiting Super Magbot on Steam (Don’t forget to wishlist ;)) – or power up your Nintendo Switch and download the demo! See you on June 22nd! We hope you’re ready…