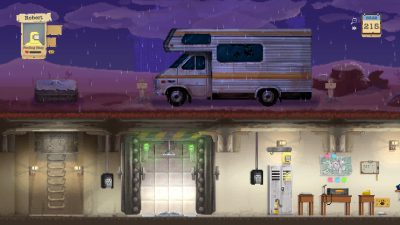 Sheltered has been out on Early Access/Game Preview for just over two weeks and it’s been an amazing to see how the community (You guys and gals) has embraced the game. Some of you have been with us since the Kickstarter campaign, and some of you are newer to the wasteland, but we want to thank you all for your continued enthusiasm and support.

We feel that Sheltered is now in a state where we can really start looking to the future. Obviously fixes and gameplay tweaks will continue, but we wanted to show you what’s in store for Sheltered as it evolves. We’ve split it into a few categories so that you can get an honest and realistic expectation of what we’re working on and the order that things are likely to hit. This is still a work in progress and all of these ideas can and will be influenced by the feedback you’re giving.

Currently in the works:

Features in the not-too-distant future:

• Loyalty system for recruits – earn their respect
• Recruits with personalities – could they have a nasty streak?
• Shelter hazards – fires and floods?
• Shelter breaches and infiltration
• Wildlife and the ‘Unhinged’ – more adversaries
• Leaderboards and achievements
• Enhanced radio functionality
• More pet types

Hopefully you’re as excited about this as we are, so sound off in the comment with your thoughts.