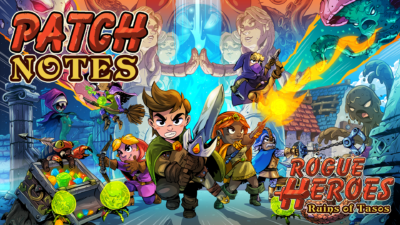 Rogue Heroes has just dropped Patch 3 for all you lovely warriors!

This patch is comes with a range of new features and bug fixes across the board!

Thank you so much to everyone for your ongoing feedback, we really appreciate it and enjoy talking all things Rogue Heroes with you as we continue to build on the game alongside the community 🙂

Check out the full patch notes below…

Made players no longer able to open the house editor during a map transition to prevent them from leaving while holding furniture.

Fixed the bounds for picking up a placed Dress Form in the player’s house.

Fixed removing carpets below other furniture unblocking their tile collision when it shouldn’t.

Made players receive the Reaper Thread if they have the quest/world event completed for the Mausoleum without holding the item or having the class unlocked.

Made players receive the Ice Boots when they don’t yet own them but are past the Rescue Hiker quest.

Fixed template weight not resetting correctly when playing online causing the same rooms to appear after a certain number of generations.

Fixed players not always seeing the potion break and gaining its side effects in online co-op.

Fixed fog overlays not drawing over the screen area when the camera is zoomed out.

Fixed players gaining the shortcut unlock state of ramps they haven’t yet opened from other players that have opened them in co-op.

Made warp statues set their unlock state to the furthest back progress in the party to fix players gaining unearned progress in co-op.

Fixed the shock overlay effect from zap jellies either not showing or always showing after the first time a player’s been zapped online.

Fixed softlock when a player disconnects in the Chip-In UI caused by players not being able to commit to leaving or finishing without that player.

Fixed players bounds being pushed downward when using the dock stairs causing them to start a map section transition in error in online co-op.

Made upgrading a node in an upgrade tree send a packet informing all other players to make the upgrade for that player to keep displayed upgrade values consistent in various areas of the UI.

Fixed players being set back to dead immediately after reviving when reviving in the lobby house.

Made players not have their stamina set to the transitioning player in multiplayer.

Fixed players spending more than one key in Croaker Caverns at doors causing them to not have enough keys to continue.

Fixed players ending up in an incorrect state (walking on water) by catching an object while in an incompatible state for catching.

Made the players currently equipped seed show correctly to other players online.

Made changes to a player’s inventory when using a shop send the changed inventory data to other players.

Fixed the arrow count not deducting when fired from a non-local client, an inventory update packet for the arrow count is now sent to all players on the bow being fired.

Fixed dropping an item from the inventory deducting the item from the wrong player due to changes made for the system where all players can use the subscreen at once.

Fixed watering can charges not updating for other players online when players fill their can at a well.

Fixed the watering can charges being deducted only from the host when watering farmland.

Fixed players being able to walk on water when another player triggers a map section transition just as they are about to drown.

Fixed the skull spawning with the wrong section and floor index when a map section transition is triggered just as a player dies online.

Made the Reaper’s charge data send to other clients in the regular player update packet so that the glow will display correctly when a critical attack is available.

Made whether a tool is a glass tool or normal show correctly in online multiplayer.

Fixed ghosts moving slowly due to some fields such as surface type and being on an ice slope not being reset to default on death.

Fixed current room not flashing in minimap when the players highlighted floor in the larger dungeon map wasn’t matching their current floor.

Made the correct button images draw for the input label for opening the status subscreen online.

Fixed a button drawing corrupted when a player views an interaction prompt over a well using a single joycon.

Fixed the cursor not being visible when players open the subscreens or the ‘save and quit’ dialog while the house editor is open.

Fixed an already open item chest having the interaction listed in the input panel when the object is no longer interactable.

Fixed the left click input icon not fading out like other inputs when the action is unavailable.

Fixed the cursor not being visible in the dungeon map screen.

Fixed a typo for the shovel description in Nik’s lab in English.

Fixed spelling inconsistencies for the Teraspis fish in English.

Fixed color selection being too sensitive and not wrapping correctly when creating or adjusting a save.

Fixed issues with some players not being able to navigate the expression wheel.

[Switch] Fixed some input types not being shown on the lobby house join screen when using multiple controller types.

[Switch] Made dungeon seed display on pause menu in a dungeon.

[Switch] Made the option to enter the pause menu from the subscreens show on all subscreens instead of just the Status/Equipment subscreen.

Fixed the Fire Turret not showing as the cause of death and instead appearing as an unrelated enemy.

Made choosing Abandon Run show as the cause of death in the game over screen.

Fixed Mouse UI selector for the seeds in the players inventory being one too high allowing players to select a null seed type.

Fixed some UI not showing the remapped inputs for Alt-Interact when that input action is assigned to a relevant input for the screen:

Made highlighting an untilled area of a farm plot show red indicating a seed cannot be placed there yet.

Made attempting to plant an apple tree show a 3×3 grid with green/red based on whether the area is clear.

Added text for apple planting restrictions to purchasing the seed at the general store.

[PC] Fixed crash on launching the game when a corrupted save is attempting to be loaded.