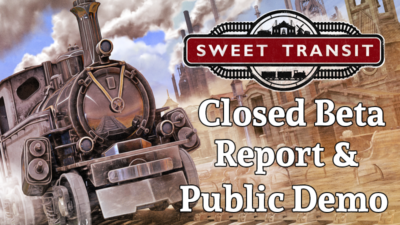 We’re excited to now share with you the next steps for Sweet Transit! Before we get into when everyone can next play Sweet Transit, I’m sure you’ll want to know what we learned during the Beta, and what the biggest takeaway were.

A note from developer, Ernestas Norvaišas:

Firstly, I would like to say thanks to everyone who took part in the Beta for Sweet Transit. The Beta was quite the success in my eyes. For me personally the biggest point of interest was seeing how you all enjoyed the game. I was very happy to see so many different playstyles and approaches to problem solving.

The biggest take away would be how different the difficulty level was in my eyes compared with those of new players. As an experienced self-proclaimed best Sweet Transit player, I’m always looking at ways to add this little bit of extra spice to make the game more interesting. This is not a bad idea, but for new people one other extra thing to balance is not an easy task when introducing this genre. This reinforces the perspective for the future that listening to only experienced genre-fans might not be the best thing when regarding the accessibility of new players.

Map generation is another topic that I found interesting. People enjoyed playing mostly on flatlands, removing the difficulty provided by the terrain. The world is designed to be uncomfortable, not having the perfect place for expansion. I personally do not enjoy the map being just a visual thing that does not contribute to gameplay, but because of the feedback, the majority of the new map generation presets will be much more casual. Hopefully later, once players get more hours under their belt will find enjoyment in challenging themselves with difficult terrains as I do.

I am very excited to see how the game evolves and becomes better. Multiple new ideas and possibilities are already in the list thanks to you all. There are no precise plans on how version 1.0 will look, just broad strokes at this time. This approach will allow me to listen to feedback and mould the game based on what people enjoy, rather than what sounds good on paper.

We’re happy to say that on June 9th at around 6pm BST, we will be launching the brand-new demo for Sweet Transit. To download this demo just head over to the Sweet Transit Steam Store page and you can download it there. This will be available for everyone to play!

This demo features a host of improvements over the Closed Beta, but we would like to state that due to on-going development work on the later parts of Sweet Transit, alongside the public availability of this demo, that the breadth of content available will be a smaller than that in the Closed Beta and all the changes listed above may not be implemented in time. The demo content showcase will also allow us to obtain more focused feedback session on the tutorial, and introduction to Sweet Transit, whilst also introducing people to what Sweet Transit has to offer. Please note that we will be opening our Discord Channels and Forms once more and encourage feedback about the new changes.

The demo will also be heading into the Steam Next Festival on June 13th through to June 20th, this will allow even more people to find out about Sweet Transit and allow us some unique featuring on Steam. Let your friends know and encourage them to download, and wishlist, it’s a great help to us.

With the demo launching, as well as the Steam Next Festival inclusion, you might be asking, when is Sweet Transit coming out?! Well, all things come in good time! A little patience will be rewarded.