Overcooked! All You Can Eat : World Food Festival and Accessibility Update Coming Soon! 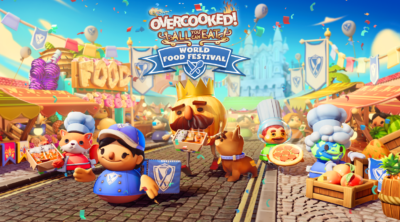 Chefs! We hope you’re bready for this 👀

Get ready to get your chef’s hat on and get cracking in with 10 new levels, in 3 different Biomes! Baked Bazaar, Metro Mash and Pepper Plaza await!

What would Overcooked be, without some absolutely scrumptious recipes? Try your hand at serving up some delicious bobotie and curry!

We’re excited to announce a new mechanic! Occasionally, you may find that a serving point is blocked by a delivery bag. Place the raw ingredient that is requested, and a delivery person will arrive to pick it up!

This tasty update will be chock-full of improvements regarding accessibility including level skipping, the ability to turn off fires, reduce flashing/camera shake, and more.

Please find the patch notes for the coming update below!

Fixed an issue with the Ghost chef’s VFX can appear incorrectly.

Fixed an issue of uneven line spacing in the menu settings.

[PC] Fixed an issue where the controller icons were not displayed correctly.

If you haven’t played it already…

Overcooked! All You Can Eat is the ultimate Overcooked experience! Play over 200 kitchens with over 80 chefs, and with Assist Mode and cross-platform support, this is our most accessible Overcooked game! Players of all ages and abilities can enjoy co-op cooking on Nintendo Switch, PS4, PS5, Xbox One, Xbox Series X|S and Steam.

Keep up to date with all things Overcooked! 🍔