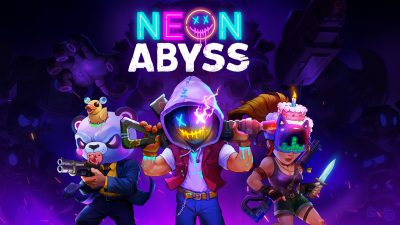 Nod along to the launch trailer here:

Not heard of Neon Abyss? Well – it’s a frantic rogue-lite that lets you run and gun your way through an ever evolving dungeon. Death is not the end, unlock new items, rooms, mini-games and even new bosses!

For those of you that purchase the game early you’ll be rewarded with the ‘Lovable Rogues’ character DLC for free as long as you purchase within 1 week of launch. Unlock both the sword wielder Saya and Amir who harnesses the power of their mind.

Take on the new gods

Battle a bunch of challenging bosses in the dungeons, plus take on tough managers who guard the path to progress further through the Neon Abyss. Each boss’s defeat will give you items for your current run but also currency to spend for future runs!

Enter the bar to choose how you want to change your dungeon runs, unlock new characters, items, mini-games and even bosses!

Gain some company in the abyss by collecting eggs to hatch and evolve pets into powerful companions. These floating friends will give you extra firepower, block bullets and much more!

Random item drops are key in helping you blast your way though the abyss. Each has its own passive abilities that can stack and combine with other effects to create powerful synergies.

Take a break from the dungeon running and play a slew of unlockable mini-games that could appear in your run like playing a giant piano to unlock some juicy item drops.