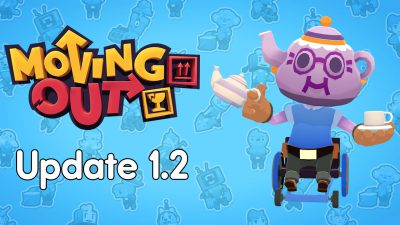 Update 1.2 is now available for Moving Out on all platforms!

New Mover: Meet T.Pott! When the heat is on and the pressure builds, it’s T.Pott’s time to shine!

Platinum Times & Medals: If you’ve beaten all gold times then this is the challenge for you!

We’ve also addressed a few issues (including the trophies/achievements that wouldn’t unlock), squashed some bugs, and made a few quality of life adjustments!

See the full patch notes below…