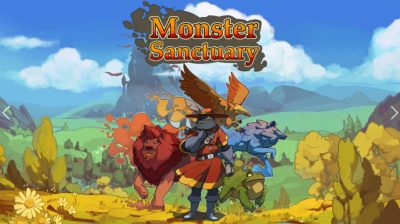 Monster Keepers and Monster Keepers of the future, the big day is here! Monster Sanctuary has officially launched and is now available on PC, Nintendo Switch, Xbox One (Gamepass), and PlayStation 4!

As the latest heir in a long line of Monster Keepers, players must explore and traverse a rich variety of environments and stop the growing and mysterious threat to the harmonious peace between monsters and humanity itself. Featuring deep and strategic gameplay including 3 vs 3 turn-based combat, players can battle wild monsters, NPC keepers, and even online opponents in PvP battles, using a variety of elemental attacks and tactics to succeed. Monster Sanctuary also launches onto Xbox Game Pass today, enabling subscribers on PC and Xbox One to get free access to the RPG for no added cost. Moreover, the 10% discount for Nintendo Switch and Xbox is also available to PlayStation 4 players with PS Plus!

During its time in Steam Early Access, moi rai games and Team17 have introduced several updates that expand the engaging world available to players, so that Monster Sanctuary launches with over 100 monsters (including 16 community designed creatures) to discover and tame across 13 areas. New areas, such as The Magma Chamber and Underworld, are just some of the mysterious environments added over the past year, and even include content created by the community.

Today’s launch introduces further content for players to experience as they embark on their epic Monster Sanctuary adventure, including the Abandoned Tower, and an additional (secret) area. 14 new monsters also join the roster, alongside optional endgame Champions; Ultimate abilities for monsters above level 40; unique equipment; and further balancing changes. One of the new monsters is the Changeling, a versatile monster with the ability to copy moves from allies and enemies alike.

Here’s everything you need to know about Monster Sanctuary’s additional launch content:

Nobody in centuries has set foot in this derelict tower. It houses the most dangerous Monsters of the Sanctuary. There are four new Monsters to collect, many of which Occult-type and capable of dishing out deadly attacks. You will also meet again some of the Champion Monsters that you’ve fought in the past.
This is also where the story of Monster Sanctuary comes to its conclusion. Don’t worry – you can still continue your save file after finishing the main story. You’ll only be able to enter the Abandoned Tower after finishing every other area’s story arc (except for the new secret area).

There’s another new area that was added to the Monster Sanctuary in this update! We don’t want to give too much away at this point, since it’s a super-secret optional area – meaning you can complete the game without setting foot here (unlike every other area in the game). It does contain four new Monsters, however, which can’t be found anywhere else.
We’ll only give you this hint: go to the bottom left room in the Magma Chamber, which is very close to the entrance to the Stronghold Dungeon.

We made sure to have some decent post-game content ready for you as well! This is what awaits you after finishing the story of the game:
The quest to become the Keeper Master: To get the highest rank in the order of Monster Keepers, you will have to find and defeat every single Champion Monster in the game! Some of them are only available after finishing the story. After the end credits, there will be a new topic in the Talk-menu to guide you.
There are five optional late-game Champion Monsters to fight, some of which can already be encountered before finishing the main story. They are hidden throughout the Monster Sanctuary. They are designed to be much more challenging than other Champion Monsters in the game, always being at the maximum level of 40 and using three actions in a turn instead of two.
Once you are Keeper Master, you gain access to Eternity’s End: a very special area at the top of the tower in Keepers’ Stronghold. A set of four challenging fights await you here, each one giving you a unique reward!

That just about covers everything! We hope you have a fantastic time exploring the depths of what Monster Sanctuary has to offer! Stay tuned for more updates, the show goes on!