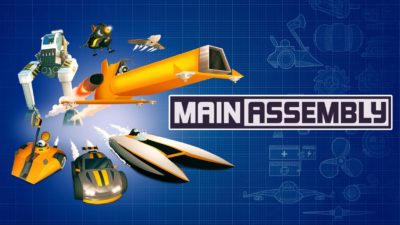 Featuring a comprehensive array of freeform building tools, players can now construct an even more significant number of intricate machines and robots thanks to a brand new update launched alongside the game’s full release.

The Final Frontier content introduces players to zero gravity, with a new sandbox map that includes a space station, a new space-based challenge level, the ability to add rocket engines and lasers to creations, and cosmetics so the in-game drone can cosplay as an astronaut. I mean, what more could you possibly ask for?! As our Inventors, our wonderfully creative community know: Main Assembly has continually expanded during its Early Access phase, adding aquatic systems, environments, and Bot Brawls (a new game mode for players to battle against each other and their creations through online multiplayer) to the game over the last few months, regularly providing more activities for players.

Houston, we have a trailer: You’re the designer, engineer and architect – if you can imagine it you can create it! Construct robots of any shape or size from eight-legged spider bots to eerie UFO contraptions. When you’ve completed your masterpiece, craft the ultimate race course, battle your bots in an arena – or fly them through space, all whilst completing a vast array of objectives! Imagination is more important than knowledge. Alone or with fellow inventors, envision your design then make it a reality.

Thank you for your support thus far, Inventors — and welcome, new creative minds! We’re happy to see you here, and we can’t wait to see the madness that you’re about to conjure up!

Main Assembly 1.0 is OUT NOW on Steam. Grab it here