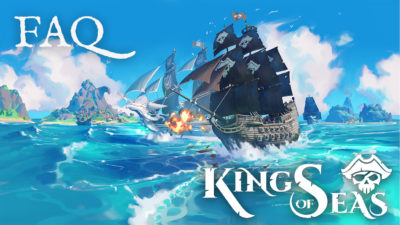 Are you ready to grab your crew and head into the mysterious, vast oceans that wait for one filthy crew to reign supreme? I’m sure you arrrrrrrrr!

Here’s a list of some frequently answered questions ahead of the King of Seas launch on May 25th. 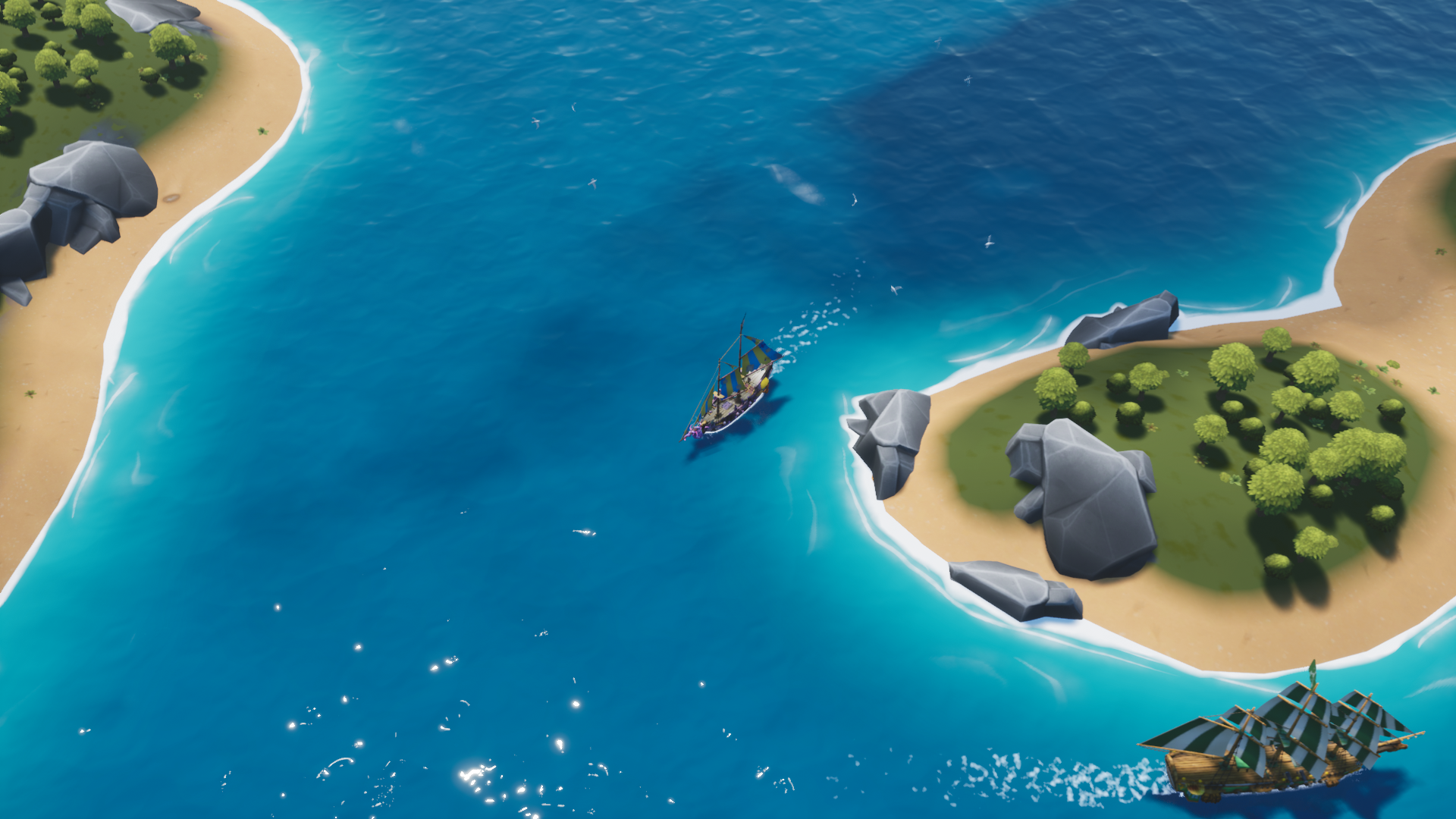 Location unknown; possibly with one of the lads.

King of Seas is an Action Role-playing game set in a procedural pirate world.

In a ferocious plot, you will have to fight to regain what has been taken away: an epic adventure awaits you in a fantastic world, dotted with fights, lost islands and treasures; a universe full of amazing characters and breath-taking missions that will keep you anchored as you struggle to become the king of all pirates.

It’s Dynamic! The world reacts to your every action, naval routes change — and with each conquered settlement the difficulty adapts to constantly give you a more challenging time. The worlds you explore are procedurally generated and constantly refresh the exploration mechanics within each new game.

Can you tell us how navigation works? I don’t want to get lost now, aye.

Sure. Atmospheric effects influence gameplay. For instance; if you sail during a storm – do it at your own risk, escape enemies you may encounter and always remember to carefully watch the wind direction to stay in control during battles. The strategy starts here. Appreciate and understand nature; it can be the devil if you don’t sail with it accordingly

Will there be any customisation?

Yes. There’s nothing quite like the appearance of power. There are five types of highly customizable ships through an equipment and skill system, just as in any true role-playing game!

I’m eager to sink some ships! Tell me what I need to know about the combat system?

Alright, just make sure you don’t sink your own. The combat focuses on cannon shots and nautical strategy, but also speed and spectacle, thanks to a set of more than 20 skills to choose from and three branches of talents to suit any playstyle!

Are they any more mechanics you can tell us about?

Aye! There’s a vast array of secondary mechanics too – including; Special Missions, Treasure hunt, Trading, Fishing and Ranking (leaderboards). We’ll tell you more about those later on ;).

What genre is King of Seas?

When will King of Seas release?

What platforms will King of Seas release on?

Is there a demo? Just so I can test the waters!

Yes indeed! There is a King of Seas demo available on Xbox, Nintendo Switch & Steam!

Can you tell me about pricing? I’d like to see if I have enough gold!

Will this game have full mouse support?

King of Seas does not fully support mouse controls; the game is designed with controllers in mind. However, mouse support will be implemented in the future! But for now, we strongly advise playing with a controller for the best possible experience.

Rebinadlbe keys; any plans for this feature?

Yes! We’ll be releasing an update with full support for key rebinding on PC at the back-end of June, 2021.

Is there a roadmap? I don’t want to get lost now!

There is indeed, Captain! Let me tell you a bit about it. We’ll be kicking things off with a PC Tech Update towards the backend of June — featuring rebindable keys; and following that, we have a quality of life patch – and a Monsters Update on the way! We’ll elaborate more on what the aforementioned updates encompass at a later date. 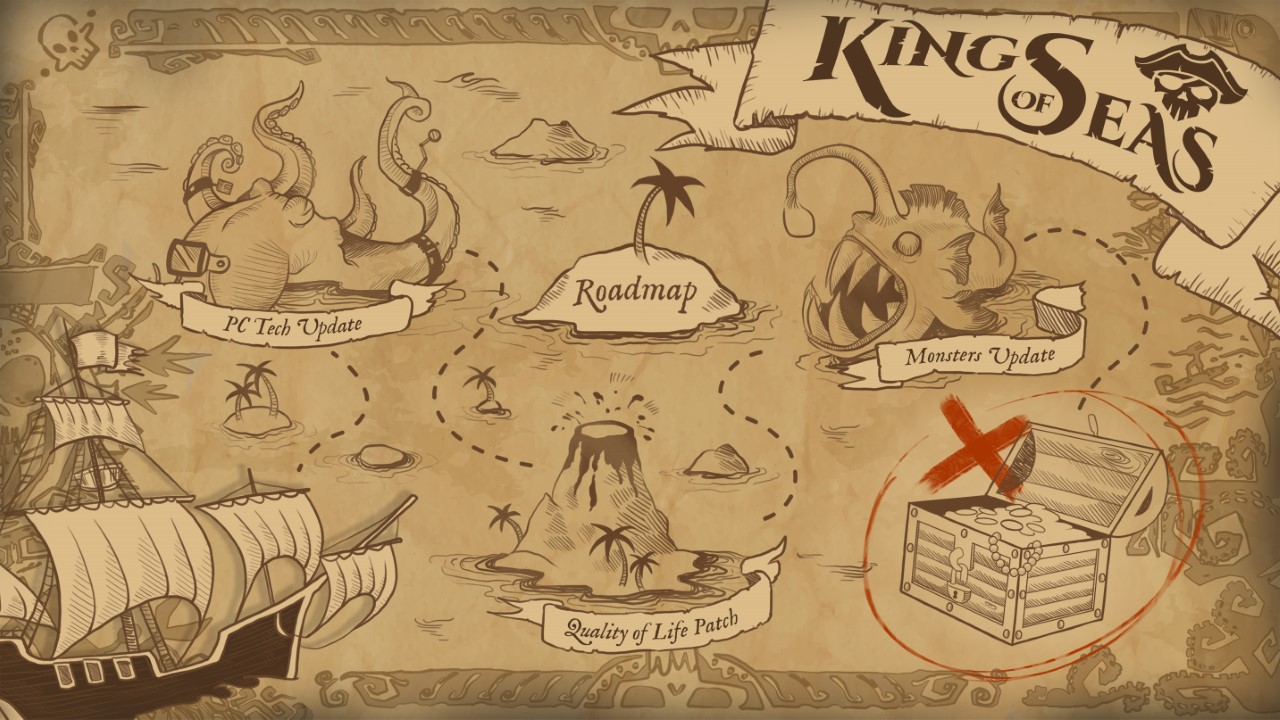 Are there any known bugs we should be ware of?

Aye! There’s an issue affecting GOG players — the PS4 DS4 and Nintendo Switch gamepads do not register, unless Steam is running in the background. This is something we’re working to address ASAP – we will update you when we have news.

What time will King of Seas be live on May 25th?

King of Seas will be available to download and play at you local midnight on console and at 9am PT, 12pm ET, 5pm BST on Steam!

Who is developing King of Seas?

King of Seas is being developed by 3DClouds & published by Team17