JOIN US IN CELEBRATING OUR UPCOMING TITLES DURING STEAM NEXT FEST! 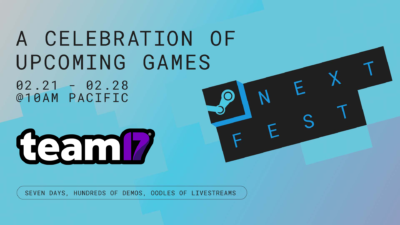 A multi-day celebration of upcoming games! Experience three of our newest games ahead of launch, during Steam Next Fest.

Experience this action-adventure set in a medieval fantasy world!

Wishlist The Serpent Rogue on Steam!

Play as Avril, a naïve and reckless girl who lost everything when her planet was decimated.

The physical and mental powers of Avril are her only weapons to save the Earth from oblivion. Explore colorful and mesmerizing planets, in a fast paced adventure where your conscience will carry the weight of your decisions.

Raise the dead as a fearsome Necromancer, in the dark world of The Unliving!

The realm of the living has become corrupted to its core, and a storm is coming to change the world order. Play as a mighty Necromancer, leading legions of the dead to smite those standing in your way, and turn them into your tools on the way to a greater purpose in this rogue-lite action RPG!

Check out pre-recorded livestreams of all three during the event on Steam!

And don’t forget to share your experiences by tagging us! Make sure to use #SteamNextFest !