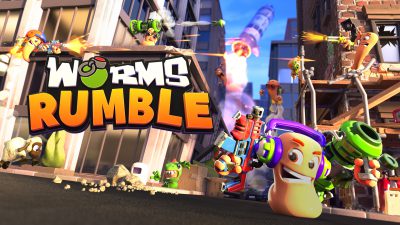 Players will rumble across the biggest Worms maps to date as they battle with weapons and items both old and new, including the Baseball Bat, Hand Cannon, Bazooka, Assault Rifle, Shotgun and more…

Worms goes real-time: Every round is in REAL TIME. When enemies rain down fire, unleash wormageddon right back!

Events, Challenges and ‘The Lab’: Take part in seasonal events, daily and community challenges, and experiment with new gameplay mechanics and weapons in ‘The Lab’.

The best bit about the above? That is just the start!

Worms Rumble will be fully-supported with ongoing content updates that will include new arenas, new customisation items for your Worm and much more!

We’ve got a Holy Hand Grenade shaped cherry for this announcement cake!

You’ll be able to get an early hands on with Worms Rumble absolutely free in our upcoming PC Steam Beta.

To secure your place in the Beta make sure to sign up here.

We’ll be revealing more about the contents of the Beta on the run up to its launch, so be sure to follow Worms on Twitter and Facebook to keep up with the latest Worms Rumble news.