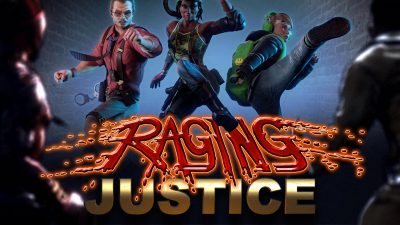 AVAILABLE FOR YOUR HOME IN TWENTY EIGHTEEN, ONLY ON NINTENDO SWITCH, PC, PLAYSTATION 4 AND XBOX ONE…

If you were playing arcade games in the Nineties, or even wish you had been then RAGING JUSTICE is the beat-‘em-up revival you’ve been waiting for!

For fans of the genre, RAGING JUSTICE is a classic style brawler brought back to life with HD graphics and surround sound. Battle your way through hordes of thugs, unleashing maximum brutality with Rick Justice and Nikki Rage’s savage fighting styles as you choose whether to arrest or annihilate your foes. Whether you play as good cop or bad cop has consequences and will result in a different ending to the game.
Key Features:

RAGING JUSTICE is developed by a small team of ex-Rare staff at MakinGames, comprising programmer Nic Makin & artist Jay Howse (Kameo: Elements of Power) as well as composer Steve Burke (Yooka-Laylee, Viva Piñata) and is heading to Nintendo Switch, PC, PlayStation 4 and Xbox One in 2018!

To hear more about RAGING JUSTICE as it’s developed, make sure to check out the following channels…