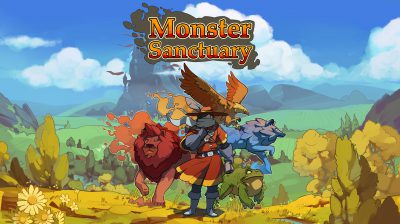 Take a glimpse at the beautiful world of Monster Sanctuary in the partnership announcement trailer below:

Get ready to embark on an epic adventure across the land with the monsters you collect:

Become a Monster Keeper and save the Monster Sanctuary

Choose one of four spectral familiars and venture forth using the power of the monsters you collect! The team you build will unlock new potential, allowing you to explore an ever-expanding world. Will you have what it takes to become the ultimate Monster Keeper and unravel the cause of a mystery that threatens the peace between humans and monsters?

The different powers of the monsters in your team will allow you to explore and expand the world. From smashing down walls and cutting vines, to gliding over gaps and increasing your jump height, your monsters will play a key part in your adventure.

Collect, hatch and train monsters from across the world as you build your ideal monster team! Every monster has unique strengths and weaknesses, skill trees and play styles that allows you to customise your party to your needs and fighting style.

Choose three of your monsters to fight for you at a time, strategically ordering their attacks for maximum efficiency during the battle! Take advantage of enemy weaknesses, heal and buff your team or strike multiple times to create devastating combos. Monster Keepers that prove themselves in battle can earn the rarest monster eggs!

Get ready to become a Monster Keeper and keep up to date with all the news from the sanctuary by Wishlisting on Steam.

Play the free demo and explore the game’s early areas, meet the spectral familiars and build your first team here.

Keep up to date with all things Monster Sanctuary here: