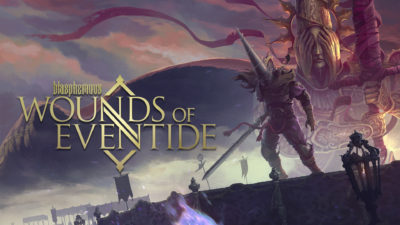 Today we are incredibly excited to share with you not one, but two announcements for Blasphemous – the brutal action-platformer from Spanish Game Developers, The Game Kitchen.

All will be revealed in the trailer below:

His end was just the beginning. Carve out a new fate for the Penitent One and all of Cvstodia in the Wounds of Eventide, available December 9th as a free update!

The People Behind The Trailer

When making a trailer such as the one above, many people from various disciplines come together to create something special. We’ve taken a moment to share a short behind the scenes video on the creation of the trailer that we hope you’ll enjoy:

With this trailer it was important for the team to stay true to the game’s roots, so they included a live orchestral track recorded by a selection of traditional and authentic procession musicians, with some of the orchestra having performed during the Holy Week in Seville, Spain.

The Game Kitchen were also humbled to work with the incredible Sunshine Animation Studio who created the amazing visuals you see for the trailer.

Both The Game Kitchen and Team17 want to extend our thanks to everyone involved in the process, thank you for bringing the Blasphemous vision to life so vividly.

Become the Penitent One

Join the over one million strong community who have already taken on the mantle of the Penitent One and discover Blasphemous! The nightmarish lands of Cvstodia await you:

Learn more about Blasphemous, including the latest exciting news at the following locations: