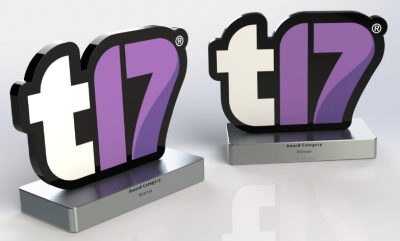 In early December 2018 we held a Team17 Game Jam and this time around we thought it might be nice to give you all a peek behind the curtain! 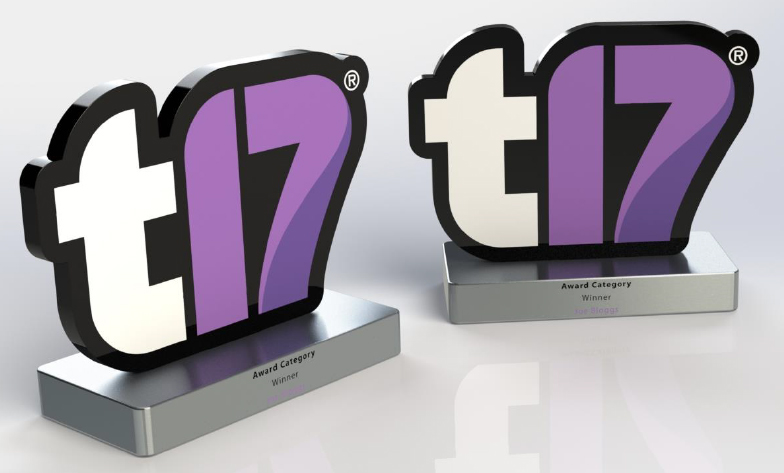 The custom-made trophy, featuring our new logo for 2018, awarded to the winners of the game jam.

Over one and a half days, ten teams from our Wakefield studio competed to see who could make the best game, with only a few rules…

And that’s it! There were no rules regarding what kind of game the entrants could make or how they would be judged. Imaginations were free to run wild, and as you’ll see below, this resulted in a wide variety of different concepts!

Now, it’s worth mentioning that there are currently no plans to take any of these concepts any further in a commercial way. The game jam is just for fun, to help get the creative juices flowing and to give our Teamsters an opportunity to experience different roles or team sizes compared to those they might experience in their day-to-day missions. And we’re presenting them here just for fun too! Below we’ve endeavoured to share with you a glimpse at all of the games created during the Team17 Game Jam, but for the winner and runners-up, we’ve been able to go into a bit more detail. Check them out…

Arctic Shell
A deliberately accessible game designed so that anyone can play it on their commute, this mobile game involves catapulting turtles toward imprisoned penguins in order to free them. We swear to you, the turtles volunteered to be catapulted! 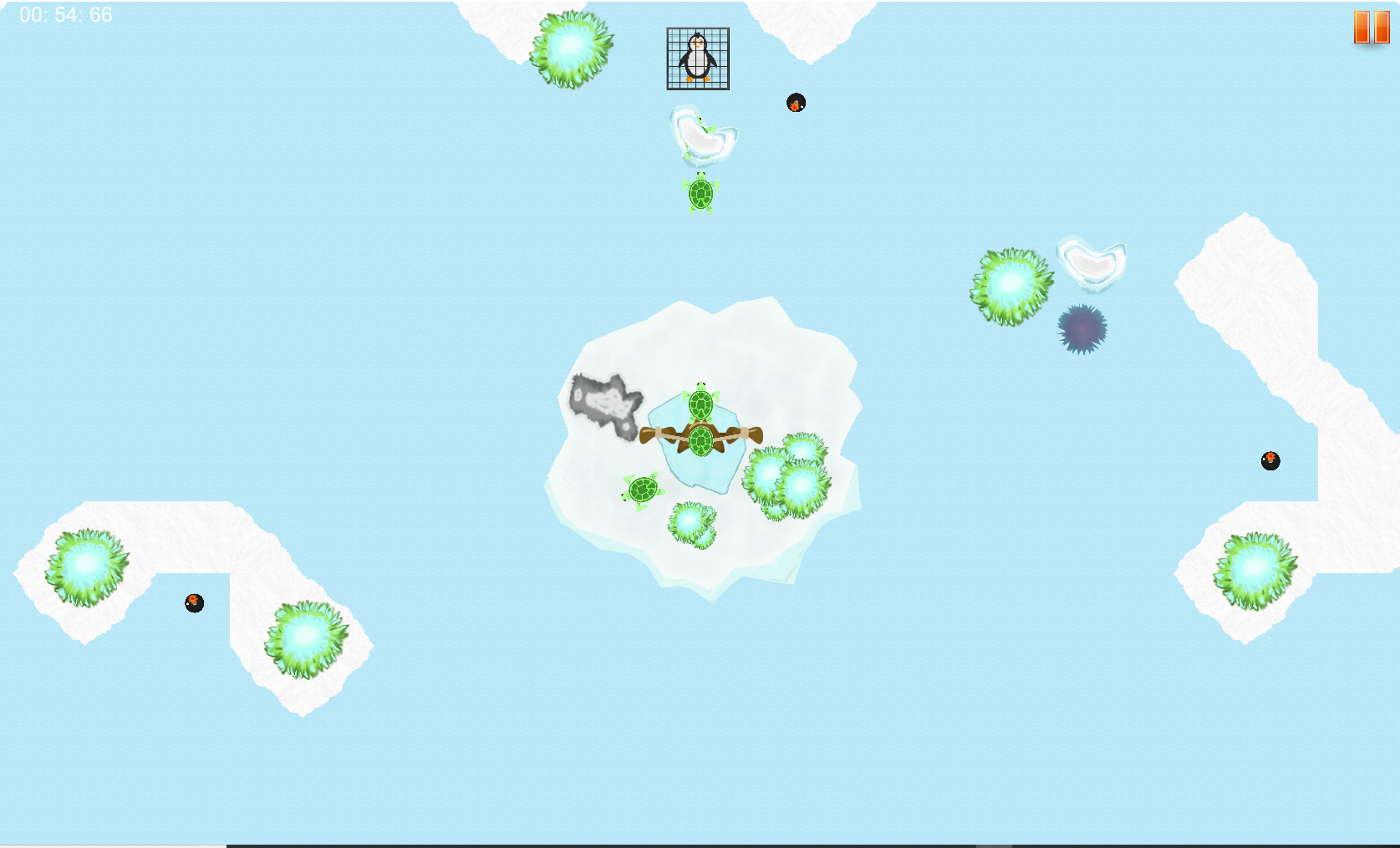 Art Attack
We have some huge fans of certain competitive Nintendo games here in the Team17 office, so you can probably guess the two titles that inspired this competitive brawler. Players are able to attack each other by throwing paint at their opponents, but the real winner is the one who manages to cover the most of the background in paint, revealing a work of art behind! 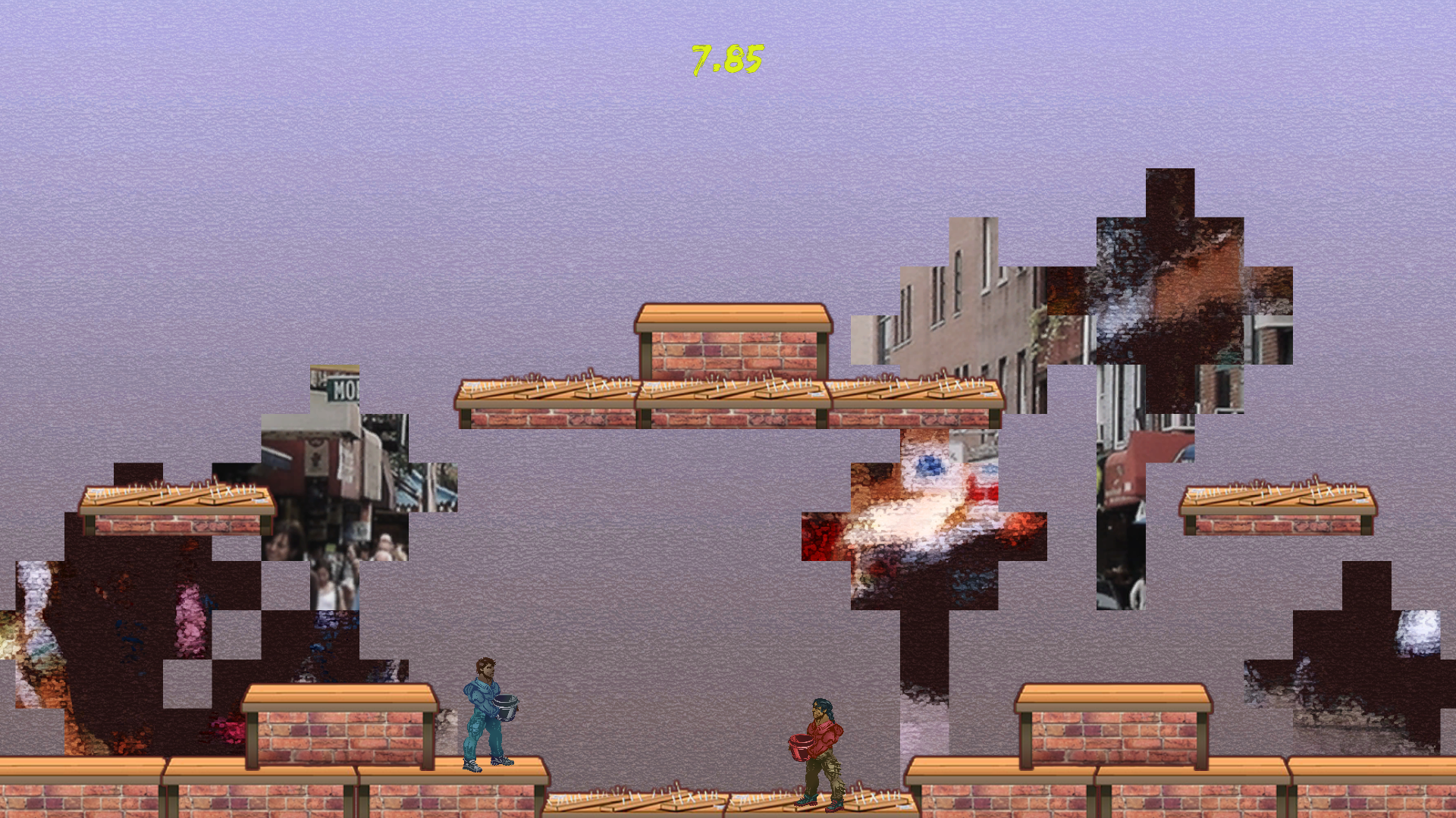 Can’t Slap A Panda!
This “rhythm-eating” game features some charismatic art with a wide variety of expressions from the cuddly panda protagonists. Impressive work for just one and a half days! And contrary to the title, you actually can slap your rival panda if you get a long enough bamboo eating streak! 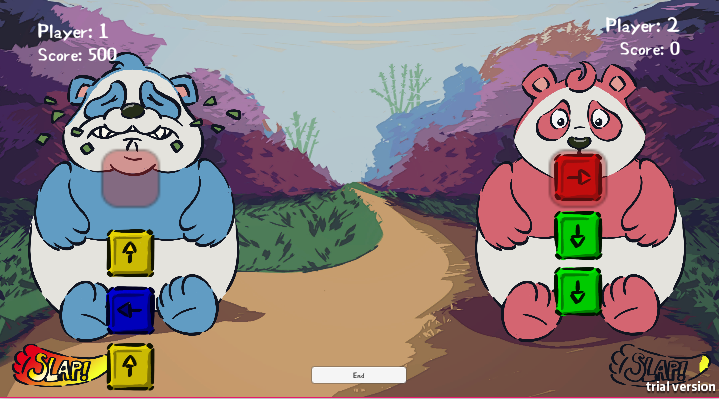 C.H.I.P.S AWAY
A co-op roguelike in which cute robot pirates must work together to reach the island and bury their booty without succumbing to other scoundrels of the sea. The developers had two bits of important advice for anyone playing this game… “Don’t fall off!” and “Love one another for who they are”. Can’t argue with that! 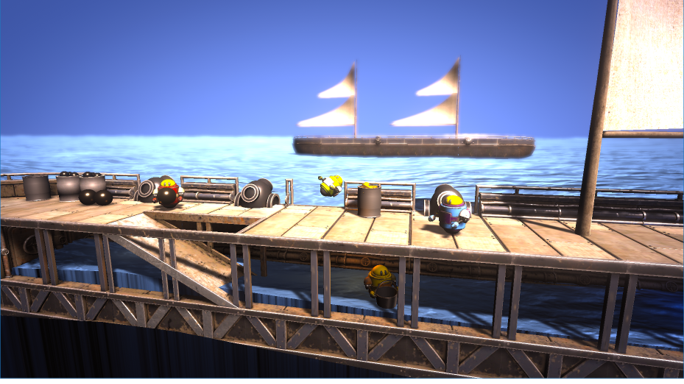 Culinary Quest
A sweet looking 2D platformer with a sinister aftertaste. In Culinary Quest you run and jump through a confectionary world, killing the cake based enemies and converting their ingredients into your own  weapons and armour. Kill a jelly for example and you can make jelly boots to help you jump higher! 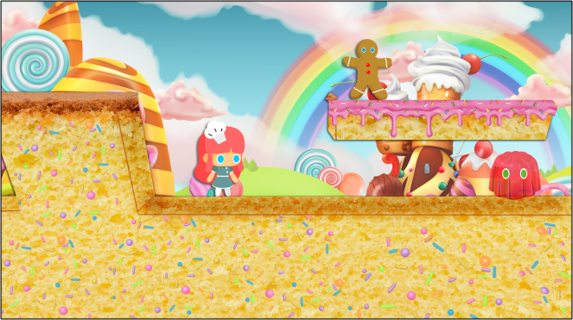 OVER-CLOCKED!
Have you ever wondered how computers really work? The team behind this fiendishly clever game have the answer. CPUs are really just tiny machines operated by a microscopic employees. Process the instructions properly by physically moving objects and pulling levers and everything will run like clockwork, but interpret the jargon incorrectly and you’ll cause a dreaded Blue Screen Of Death! 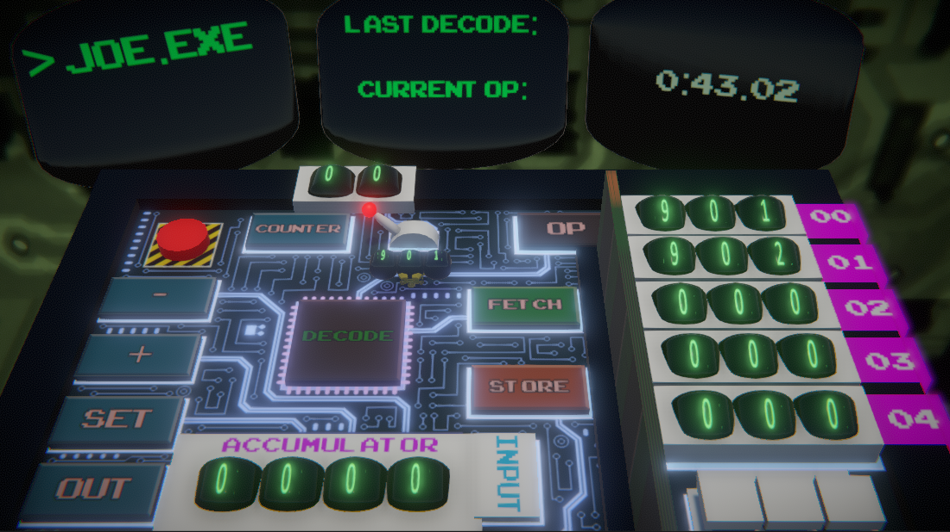 The Thirsty Axe
A score-attack arcade game in which a viking landlord must protect his pub from beer-stealing marauders. The inspiration behind the game? “We like Vikings!” shouted the devs before lobbing an empty tankard at us. 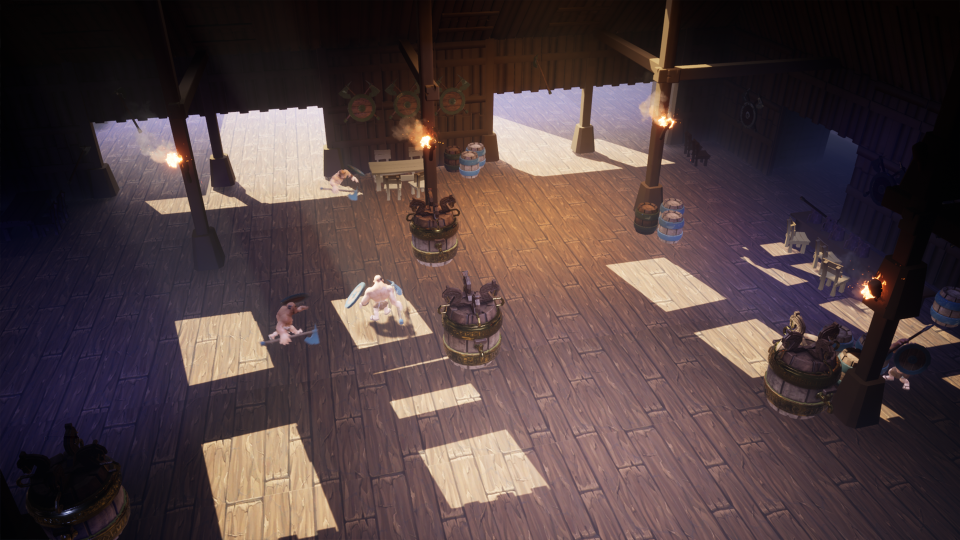 The RUNNERS-UP
These entries didn’t quite win but they really impressed the other Teamsters and scored enough points in the judging process to really stand out. Take a look…

Battle Cauldron
In this co-op action game, two necromancers work together to defend their cauldron from the undead. Defeat them and they’ll drop body parts you can lob into the cauldron. Match three ingredients and the cauldron will cast a helpful incantation!

“We’d had a high level idea about mixing ingredients in a cauldron to do “stuff”, inspired by The Legend of Zelda: Breath of the Wild’s cooking mechanic,” says designer Adam Findlay. “We went through some iteration of what the cauldron would actually do, and in the end we went with the idea of the cauldron casting powerful spells as you mixed together different body parts dropped from your fallen foes! Sort of a multiplayer tower defence, dungeon crawler, match three cooking game mash up.”

Of the game jam itself, Adam says, “We all had a lot of fun with it. The quality and speed of work produced by the team was really impressive in such a short space of time. Getting our idea nailed down early on really allowed us to maximise our time and iterate on what we created. Everybody really pitched in both from home and work in to the small hours of the evening before the deadline, so I think everybody was really invested in making it the best we could!”

Stabfest
Somehow in one game jam, we got two games about protecting beer from thieves! (These Teamsters are obsessed, we think!) Instead of vikings, Stabfest features jetpack wearing gnomes (of course!) In this multiplayer battler, the gnomes can stab each other with their spears, but they also need to be mindful of the minecart full of beer and keep it safe, making sure their opponents don’t drag it away! In 2-v-2 mode, players can even team up to drag the minecart faster but, of course, they’ll leave themselves defenceless in the process.

Designer Ben Hadley describes Stabfest as “Nidhogg meets Joust” and says the themes of gnomes and beer fell into place only after the gameplay concept was decided. Smart! “It was a hectic couple of days but the team put in a massive effort and absolutely smashed it,” Ben adds. “We kept the scope pretty small and thought we’d have time to spare at the end, but we ended up working on it right up to the deadline! That’s part of the fun and challenge of a game jam.”

AND THE WINNER IS…

WarMech
Taking home the most votes and lovely trophy was WarMech, a versus shooter set on a spherical planetoid. The concept is simple but it’s the execution, and the great team work that went in to making the controls, power-ups and competitive play all function in perfect harmony, that really made WarMech a winner!

Artist Phil Brown came up with the original concept for WarMech. “I wanted to make something that’s easy to pick up and play. Something with an arcade feel that makes for a player base who have one goal… WIN AT ALL COSTS!” One of the smartest elements of Phil’s game jam strategy is that he floated the concept for WarMech in advance of the jam and recruited the people most attracted to and well suited to the game. “A lot of us were interested in various aspects of the project and I think this helped because a lot of care was taken by all of us to deliver the things that had individually attracted us to making this game. I had total faith that the team we’d assembled could get the idea across. It was a great experience and they nailed it!”

That’s everything from the Team17 2018 Game Jam. We hope you enjoyed this look behind the scenes, and at some of the ideas our Teamsters have when they’re not working on hits like The Escapists, Overcooked! 2 and other games we can’t mention yet. If you enjoyed this article or would like to tell us which of the concepts you liked the best then why not tweet us and let us know what you thought. We’d love to hear from you! And if you’re a budding game creator who’d like to work at Team17 and take part in our next creative endeavour then why not take a look at our recruitment page and see if there’s a vacancy for you!