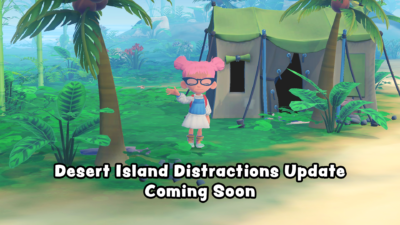 We’re so, so excited to be bringing you some news, hot off the press! 📰

As you know, we’re prepping for Hokko Life to launch out of Early Access on Steam and on consoles on September 27th. We have a HUGE update coming your way on the same date, and we’d just love to share the details with you!

Ahoy there, get ready to set sail! Explore a new Desert Island, and uncover its secrets…

If you’ve ever wanted to be an archaeologist, this one’s for you – you’ll be making good use of the Artefact detector, as you uncover hidden artefacts, and enhance your designs with sparkly gems! 💎✨

We’re also excited to share that this update will be bringing all new species of tropical fish and butterflies for you to add to your collection! 🦋

Get ready to welcome Ramesh, an all-new villager who just can’t wait to meet you!

This one’s a biggie — you asked, we listened! We’re so excited to share that this update will also bring SteamDeck support and Steam Achievements to the table.

Thank you for all your feedback as we work towards the Early Access release date. This update will have LOTS of bug fixes, including those raised by you, the community! Find just a few of the key fixes below:

… and lots, lots more! We really do appreciate all your bug reports, as we continue to work on Hokko Life! 💕

We’ve included the full patch notes below, so keep reading to find all the improvements and new content coming your way below! 👇

If you’d like to report any other bugs ahead of this update or after, please use this form, so we can take a look!

We appreciate any and all feedback! Don’t forget, just because we’re launching out of Early Access, this doesn’t mean we’re done just yet – we’re working on more stuff for future updates which we’ll share as soon as we can! If you haven’t already, check out the August Devlog that mentions some of what’s to come (including teleportation shrines, and house expansions)!

All this shiny new content will be available on consoles and Steam! Get ready for this massive launch, coming your way VERY soon!

That’s all for now, Residents! Keep an eye on our socials below to keep updated of all future news and updates!

Keep up with all things Hokko Life 🌞: