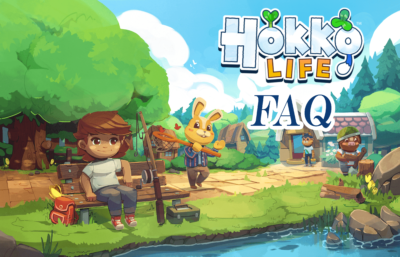 Here’s an FAQ with everything you need to settle into the cosy town of Hokko!

What is Hokko Life? Hokko Life is a cosy, cute life-sim game! Design, craft, fish and make the town of Hokko, your own!

Why Early Access? By bringing the game to Early Access first the developer can continue to develop and improve the game, along with the support and input from the community. During Early Access we’ll be getting you involved to help shape the world of Hokko, delivering updates and improvements over the coming months!

Will there be controller support? Hokko Life has partial controller support – but currently there is need for keyboard and mouse when typing in names of things, and changing the settings etc, this is something we aim to address in the future!

Is there key rebinding? Yes!

Is there a Discord server? There is – you can join here!

Can you have multiple saves? Not currently!

Is it possible to change my character’s appearance after the character creation? Yes!

Is there a demo? There are no plans for a demo.

Is Hokko Life multiplayer? The game has been built as a single-player game from the beginning, and as a result does not have multiplayer. The game will however, support sharing of user-creations such as furniture and clothing!

Is Hokko Life coming to Mac or consoles? Hokko Life is Steam only for Early Access!

Do villagers spawn randomly? Your starting villagers are randomly generated!

How many villagers can you have at once?  Once they’re all unlocked, you can have all of them in your town if you want to!

How many villagers are there in total? 24, but we’ll be looking to increase this throughout the Early Access campaign

How does time work in game? In Hokko Life, time progresses at its own pace and isn’t tied to the real time. You can sleep to advance time to the next day, for example.

What can you customise in Hokko Life? You can change the colour of your: eyes/hair/skin, either choosing from presets, or there will also be a set of red-green-blue sliders for you to play with too. Clothing wise you can change your top, bottoms, shoes, hat and face/head item (like glasses). You can also customise the wallpaper and roofing for houses, furniture and even the town square!

Will there be seasons? Yes! And weather, which changes daily!

What does Hokko mean? Hokko is a ‘mash-up’ of two Japanese terms: hoko (being warm and feeling good) and hokkori (warm and fluffy/soft)

Will Hokko Life have Steam workshop support? There are no plans for this!

Is there terraforming? No!

Will there be mod support? There are no plans for this at this time.

Can you craft multiple items at once? Yes, you can!

Can you choose your pronouns? Dialog currently in the game doesn’t refer to the player using pronouns, and as such there’s no need for this yet. If there were to be dialog added that needs personal pronouns, the default would be “they/them”. A system for customizing your pronouns could be added in future though!