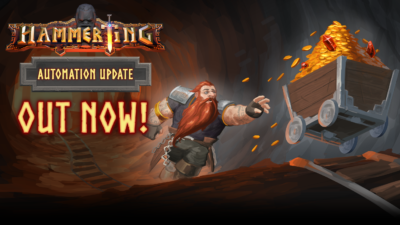 A mighty update has landed in Hammerting!

Check out the new features below:

Combined Railway Station!
– The building previously known as Elevator Station is now known as Rail Station.
– The building previously known as Railway Station has been yeeted. (But will continue to work in your old saves) (And may come back in some form.)
– It can connect both to horizontal and vertical railways.
– Some say it can even connect to Inclined Railways. Extremely obscure reference warning: Or dress up as a stationmaster.

Inclined Railway!
– Or is it just Incline Railway? Sloped Railway? The debate rages in the dev chat channels.
– This is for those of you who like to build your base diagonally! 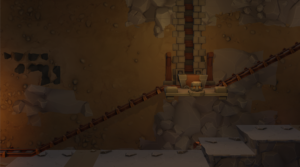 Tool Automatic Upgrading!
– Dwarves will now automatically go to equip new items that are better than the ones they have in the toolbelt.
– This can be turned on and off. There’s also an option to customize how you want it to work.
– By default, the autoupgrade logic will attempt to figure out ONE profession per tool that it thinks it should look for when upgrading.
– Unallowed professions are ignored, and Favorited professions are preferred.
– The logic refreshes when the player favorites or allows a profession, and when the dwarf gains a level. 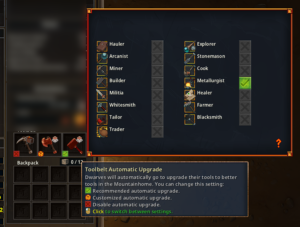 Equip-from-dwarf!
– It is now possible to equip items directly from a dwarf’s inventory. 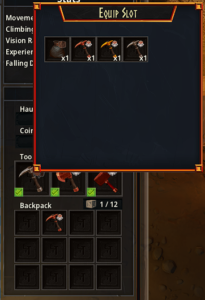 Talents Automatic Acquire!
– It is now possible to set a dwarf to automatically acquire Talents when they level up.
– Double click on any Talent to set it, and all of its requirements, to be auto-acquired.
– Improved Talent tooltip.

Clean Inventory Action!
– Dwarves will go and drop off items they are carrying that aren’t reserved for something else.
– This has a higher priority than general work.

Outliner Customization!
– Added a mission notification on location entries in the outliner.
– Change the height and/or width of the Outliner.
– Change the size for Alert and Dwarf entries.
– Different parts can be moved to the left and right side of the screen.
– Different settings for when you’re viewing the Cave and the Overworld.
– List or icon variations for Alert entries.
– Lots of outliner tooltips.
– New icon variant for dwarf entries in outliner.
– Outliner scrollbars are now hidden if the list is too small.
– Rumor has it that parts can even be completely hidden!

Overworld Improvements!
– A Production Capacity modifier has been added, allowing for location production on the Overworld to differ based on various effects.
– It’s now possible to affect Faction Influence on the Overworld by paying a location with Trade Lore.
– New Overworld Missions: Mote & Beam, Axes for the Mill, Dwarven Embassy, Water for the Thirsty.
– Overworld prices are now updated on relevant events.
– Prices on the Overworld are now affected by your standing with the location’s faction.
– Various price tweaks.

Vaults!
– With great automation comes great coin. Now you have somewhere to store it!
– The Small Vault has been added. It can store 10 gold.
– The Large Vault has been added. It can store 50000 gold. Yes, you read that right.
– Vaults are now the primary storage for your Mountainhoard.
– The Mountainhome can store a small amount as well.
– A Vaults Needed Alert is shown when your Mountainhoard is larger than how much can fit inside your vaults. Avoid this, or coin will be continuously wasted.
– Added an indicator by the Mountainhoard UI that’s visible when you are over capacity.
– Dwarves will, for now, still go to the Mountainhome Chest to take gold, but it will be magically teleported from an existing vault.
– All coins are in fact magically teleported to and from vaults. In the far future, we may figure out how to make the dwarves carry gold to them.
– Vaults visually display roughly how full they are.

Win Condition: Righteous Affluence!
– A brand new Cave Mission has been added. Upon completing it, you trigger a Win Condition.
– To complete the mission, you need to construct a Large Vault, and then fill it to the brim!
– You can continue to play even after winning.
– If you manage to do this, let us know! It is not an easy task.

Keep up to date with the latest Hammerting news:
Hammerting on Twitter