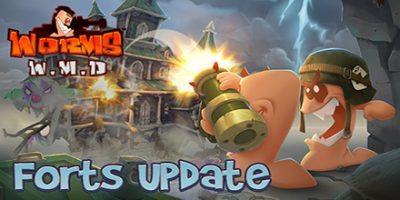 Today marks the day that Forts Mode arrived on Worms W.M.D for PlayStation 4 & Xbox One players, bringing them on par with their PC playing cousins with this free, community driven update.

But what is Forts Mode we hear you ask, why have you made it? Well, to answer that please allow us to introduce Jegg, Senior Designer at Team17 and Worms expert.

Here’s some titbits as to what Fort Mode is and a peek into creating them.

Forts is a game mode where two teams fight from their chosen fort, each team’s worms start on their own fort when randomly placed (in teleport in, worms are also limited to spawning on their own fort).

It can be argued that fort mode requires more skill as long range shots are often needed. Especially if there are gentlemen’s rules of no crossing over to your opponent’s fort (invading your adversary’s fort can be frowned upon although others would argue that if you can then it is fair game). This house rule can be enforced by removing movement utilities from a scheme. A player can also make invading less attractive by use of fort extras, more on this later.

Development of a Fort

Though we didn’t want any one fort to have an advantage. We did require variety and flavour. Each fort has pros and perhaps cons depending on your playstyle. Like to hide your worms away? Pick the Castle Hassle fort with its large building but weak crumbling walls. Or perhaps you want overhead protection in the form of a crane on Donkey Dig but potentially offset by narrow firing positions.

Actual development starts with drawing rough sketches, we’ll talk about these, play them over in our minds and import the silhouette into the game for some very early playtesting. Some ideas get thrown away while other more promising ideas go to the artists for the next stage.

At this point there’s a fair bit of back and forth between the designers and the artists, where will the buildings sit? What areas are crucial in shape? Is it too difficult to navigate? Gradually we end up with a final shape which can now be dressed by art. This includes the flipped version of the fort. Lighting in Worms WMD is drawn onto the object. In a forts game where both players have the same fort we flip it, this requires the lighting to be changed so that all looks tickety boo.

By now we’re playtesting forts against other forts making sure none has a clear advantage. We also continually tinker with small parts of the landscape, fort extra placement and worm spawn zones.

The final touches are to add animated elements to each fort. Each has a number of dynamic element bring them alive.

There are 6 different forts currently to pick from with more planned to be released in the future.

From sketch to final

A new feature we’ve added is the ability to decorate your fort with an animated banner. This uses your avatar picture from your profile. Watch out though, these are vulnerable and can be knocked off your fort via explosions.

We found during playtesting, even if a game were lost, knocking your opponent’s banner into the water provided some conciliation.

On my banner I have my pooch Abby, proudly hanging on the Pirate Ship fort ‘The Pink Peril’. Knock her off and feel my wrath!

Banner swinging in the breeze

Another way to customise your fort (and these have gameplay implications) is through fort extras. These are objects that you can pick to be placed on your fort.

These can be crates, such as extra health or craft. A static gun for offensive measures. Even a sentry gun to deter invasions and more. These are placed in a set location unique to each fort. Only one extra can be chosen but you are free to change your mind and experiment.

So there you have it, enjoy the free Forts update.

All the best, Jegg.