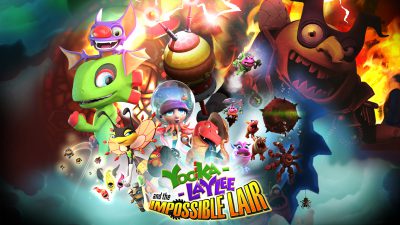 Yooka-Laylee and the Impossible Lair a colorful 2.5D platformer with a lovable duo has received an update! We also begin the celebrations of the third year anniversary of the original Yooka-Laylee with an update coming soon!

Here are all of the changes:

We’ve made some changes to the Lair itself, as it could feel, well… quite impossible. With this update we want to offer more options for taking on the Impossible Lair whilst still keeping the sense of challenge and achievement.

Simply flip the switch on the difficulty to choose which version of the lair you want to tackle!

Not So Impossible Lair
Each section now ends with a checkpoint. These checkpoints save your best ‘Bee Shield score,’ meaning you can choose which sections to start from, practice and improve on! Using these checkpoints is entirely optional.

No Bee Shield and no checkpoints either! For taking on this ultimate challenge, you can receive the ‘Golden Try’ Tonic and you require no new save file to attempt it.

The excellent Tater-Tot Tunes has composed an entire 8-Bit Soundtrack which covers every 2D level in the game. You can access it in the pause menu. If you love grooving out to chiptunes, then be sure to turn it on and crank up the volume!

Yooka-Laylee has turned 3! As a Birthday treat, we will include the long awaited 64-Bit Tonic to Playstation and Xbox! This will also bring the updated ‘Impossible Lair’ version of Yooka-Laylee seen below as free DLC to the Steam and Switch Tonics! This update will be live soon, watch all of our socials for news!

Chat with Vendi to activate the 64-Bit Tonic and be taken back to the ‘good old days’ with this down/upgrade!

Want to take on the new Impossible and Not So Impossible Lairs game for yourself? Head over to the Steam store page or store pages on Nintendo Switch, Xbox One and Playstation 4!