CHECK OUT OUR UPCOMING TITLES IN THE FUTURE GAMES SHOW! 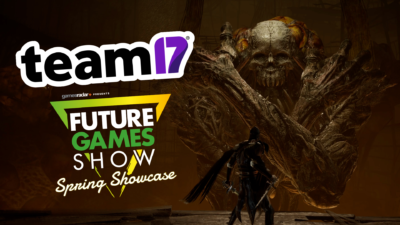 From journeying across planets to thrilling first-person shooters and fantastical realms — get ready for adventures aplenty!

We’ve just revealed a packed line-up of games coming soon to PC and consoles as part of the Future Games Show Spring Showcase!

Featuring nine titles across multiple genres, from explosive shooter Trepang2 to Slavic folklore inspired Gord – we have something for you.

Inspired by Slavic folklore, Gord is an intense, single-player strategy game set in a dark fantasy world. As the leader of the Tribe of the Dawn, players will help the group strive to establish and fortify new settlements – gords – as they explore eerie forbidden lands filled with horrific creatures and deities. As the tribe develops, players will have to manage the populace whose personal stories, familial ties, and well-being, can have devastating impact on the survival of their communities.

Set in an early-1990s dieselpunk alternate timeline, Marauders is a hardcore first-person, multiplayer, looter shooter launching into Stream Early Access and Game Preview via PC Game Pass later this year. As a space pirate work solo or in a squad of up to three other players, embark on daring raids, and survive intense combat.

Coming soon to PC Early Access is The Unliving, a dynamic roguelite action-RPG where players will control a fearsome necromancer on a path of destruction. As the necromancer overcomes its foes, resurrect them into an ever-growing army of the undead to smite cities, slay epic bosses, and unravel mysteries of this dark world.

Launching on PC, Xbox Series X|S, Xbox One, Nintendo Switch, PlayStation 5, and PlayStation 4 later this year, Batora: Lost Haven is an action-RPG that combines dual hack & slash and twin-stick shooter combat mechanics in an interplanetary tale of discovery. As Avril, a teenager with recently imbued extraordinary powers, players will tread the thin line between good and evil as she tries to save her planet from its fate and restore it to glory.

Thymesia is a gruellingly dark and challenging, action-RPG set in a kingdom where death and plague reigns terror on the populace. Set to launch on PC, Xbox Series X|S, and PlayStation 5, players will wield the power of disease as the mysterious Corvus to prey upon the kingdom’s enemies and unlock the truth from within their own memories.

Production is power in Sweet Transit, a strategic city building game coming soon to Steam Early Access. From solo developer Ernestas Norvaisas, Sweet Transit is set in a world where trains are the only means for transportation and expansion; players will evolve the game’s world with trains, build remarkable railways and expand their locomotive networks.

Ship Of Fools is a frantic, ship-based, couch co-op and online multiplayer launching later this year on PC and consoles. Designed from the keel up for co-op play, players must manage ship repairs in the heat of battle, reload and re-manoeuvre cannons, and use paddles to strike enemies as they take command of the good ship Stormstrider. Embark on a treacherous adventure through the deep, dark waters of the Archipelago and attempt to avert the Aquapocolypse!

Launching on PC soon, Trepang2 follows an enhanced soldier newly broken out from a heavily guarded blacksite on a mission of revenge, only to and find themselves hunted by an even greater threat. Having lost all memories of their past life, but imbued with superior combat abilities, strength, and stealth, Trepang2 unravels their story through a bullet-laden and bloodthirsty single-player campaign.