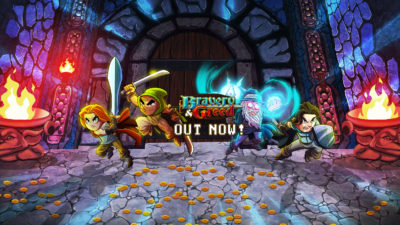 It’s time to get rich or die trying! 💰

Assemble your party of four, delve into the dungeons, and start lining your pockets in this new adventure roguelike. With four classes to master, players have an assortment of skills and abilities to assist them in their quest to loot everything (and anything) that isn’t nailed down!

Alongside the co-operative campaign found in Adventure mode, Bravery & Greed also features a Horde mode – an increasing challenge with waves of unrelenting enemies; and PvP modes for players who would rather tackle their differences head on 💥

There are four classes to choose from, each having their own perks and disadvantages!

The Rogue 🗡️: Nimble, quick and stealthy. This class can take down foes from afar with their trusty bow and arrow. If efficiency is your thing, there’s no better class.

The Warrior 🛡️: Mighty and sturdy. A resilient melee specialist who can seriously tank and control crowds. Block and/or parry with a trusty shield, providing a both evasive and offensive moveset.

The Wizard 🧙 : A challenging class to master. Specialising in medium/long range attacks that work best when not too close to the action. Teleport out of harms way, and summon bulky familiars to destroy your foes.

The Amazon ⚔️: A melee expert. Lethal at short and mid-range attacks, with little to no regard for her own safety. Aggressive playstyle, and strong close combat abilities make up this challenging class.

Bravery & Greed is available now on Steam, the Playstation Store, Microsoft Store, and Nintendo eShop. To keep up to date with all the information on Bravery & Greed, please give us a like on Facebook, follow us on Twitter and join our Discord! For more info, please head to the Bravery & Greed  website.