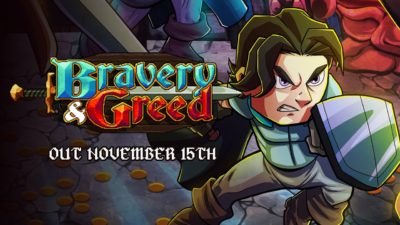 Are you ready to loot and plunder?

Melding classic fantasy arcade game play with permadeath, roguelike elements, and an insatiable objective of grabbing fistfuls of gold and treasure, Bravery & Greed will include several modes for players to loot and plunder through!

Check out the trailer below for more in-depth info:

Harking back to classic adventure video games of the 80’s and 90’s, Bravery & Greed offers four classes, all with their own unique skills and abilities, for players to . Master your class to survive long enough to loot everything (and anything) you can get their hands on! 🏃💨

PLUS, get ready for Nov 15th by polishing your daggers on the demo, now LIVE on Steam! ⚙️✨

There are four classes to choose from, each having their own perks and disadvantages!

The Rogue 🗡️: Nimble, quick and stealthy. This class can take down foes from afar with their trusty bow and arrow. If efficiency is your thing, there’s no better class.

The Warrior 🛡️: Mighty and sturdy. A resilient melee specialist who can seriously tank and control crowds. Block and/or parry with a trusty shield, providing a both evasive and offensive moveset.

The Wizard 🧙 : A challenging class to master. Specialising in medium/long range attacks that work best when not too close to the action. Teleport out of harms way, and summon bulky familiars to destroy your foes.

The Amazon ⚔️: A melee expert. Lethal at short and mid-range attacks, with little to no regard for her own safety. Aggressive playstyle, and strong close combat abilities make up this challenging class.

Alternatively, try out Horde mode – an increasing challenge with waves of unrelenting enemies; or PvP modes, where players will be able to settle their grudges in head-to-head combat.

Bravery & Greed is currently available to wishlist on Steam. To keep up to date with all the information on Bravery & Greed please like us on Facebook, follow us on Twitter and join us on Discord!