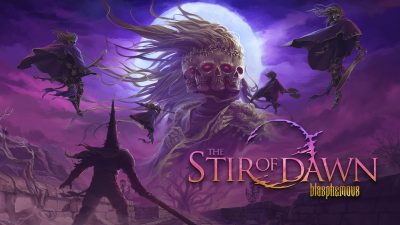 Today we’re excited to share with you that Blasphemous, the punishing action platformer from The Game Kitchen, is receiving a free DLC on August 4th which sees playing reprising their role as The Penitent One as they seek out to awaken an ancestral power long since forgotten by the Miracle…

Coming to Steam, Nintendo Switch, PlayStation 4 and Xbox One as a free update for all players, The Stir of Dawn will take the Blasphemous experience to the next level with:

All of this and more will be coming to Blasphemous on August 4th!

Each week on the run up to launch we’ll be delving deeper into what awaits you in The Stir of Dawn DLC with blog posts over on the Blasphemous Steam News Page, so keep an eye there to get a first look at even more new Blasphemous content with a behind the scenes explanation from the Developers.

Join the Brotherhood of the Silent Sorrow and become truly penitent by: