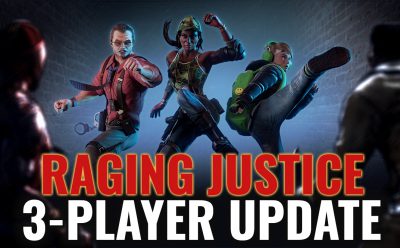 Calling all beat-em-up fans! After launching RAGING JUSTICE back in May of this year, we’ve been listening carefully to all your feedback and the developers at MakinGames have been very busy adding several improvements and new features. We’re pleased to say that the first batch of those additions are now live in a free update across all platforms!

The biggest addition in the free update is the brand new 3-player modes, so you and two friends can all take on the streets as Rick, Nikki and Ashley! Or, if you prefer, you can all play as the same character, since we’ve also added a palette swap mode!

In response to some players who’ve told us the game is just a teeny tiny too difficult to finish, we’ve also made some tweaks to the difficulty of bosses and introduced a much easier “Casual” difficulty mode. This mode disables achievements/trophies but has unlimited credits, so if you want to see the game through to the end then this is your mode!

Check out the full change list below the video!