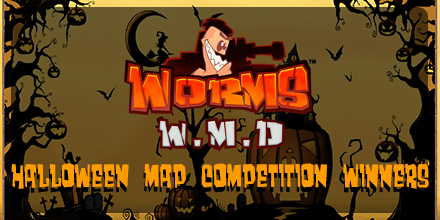 Whether you’re looking for tricks or treats on this, the spookiest of days, the worms have been preparing for battle on some player created, Halloween themed maps.

We challenged the creative players that reside within the Worms W.M.D community to come up with their interpretation of a Halloween themed map, with our favorite being chosen as the winner. The winner would be rewarded with a map spotlight on Thursday’s Worms W.M.D stream as well as earning themselves an official Worms plushie signed by the Worms W.M.D creative team.

However, we were so impressed with the high quality we were seeing in our entries we couldn’t settle with just one winner, so we went for two! Both our winners will be receiving the advertised prize and we highly recommend that if you’ve got Worms W.M.D on Steam you download these maps free and get stuck into some horror themed wormy warfare using the links below.

There you have it! A huge thank you to everyone who submitted an entry, we were massively impressed by the quality and originality of the maps that were submitted into the competition. It was tougher than a Concrete Donkey to pick our winners.