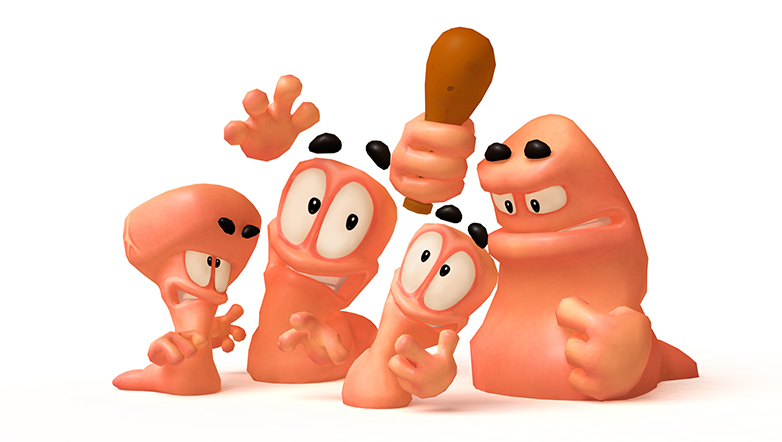 Welcome to the latest chapter in our history of Team17’s first 100 games, celebrating the release of game number one hundred, PLANET ALPHA.

In this installment we’re taking a look at 2011 and 2012, two years packed with Worms games that could not be any more different from one another! We have the final 3D game, our first 2.5D entry, a sports spin-off and Worms’ one and only free-to-play social game. All with interview contributions from the original developers!

After Worms 3D and Worms 4 Mayhem, came the third and final attempt to crack the three-dimensional Worms formula. Ultimate Mayhem, as the name suggests, was a HD remake of Worms 4 Mayhem, but also included Worms 3D stages and a boatload of improvements to really make it the “ultimate” 3D Worms. 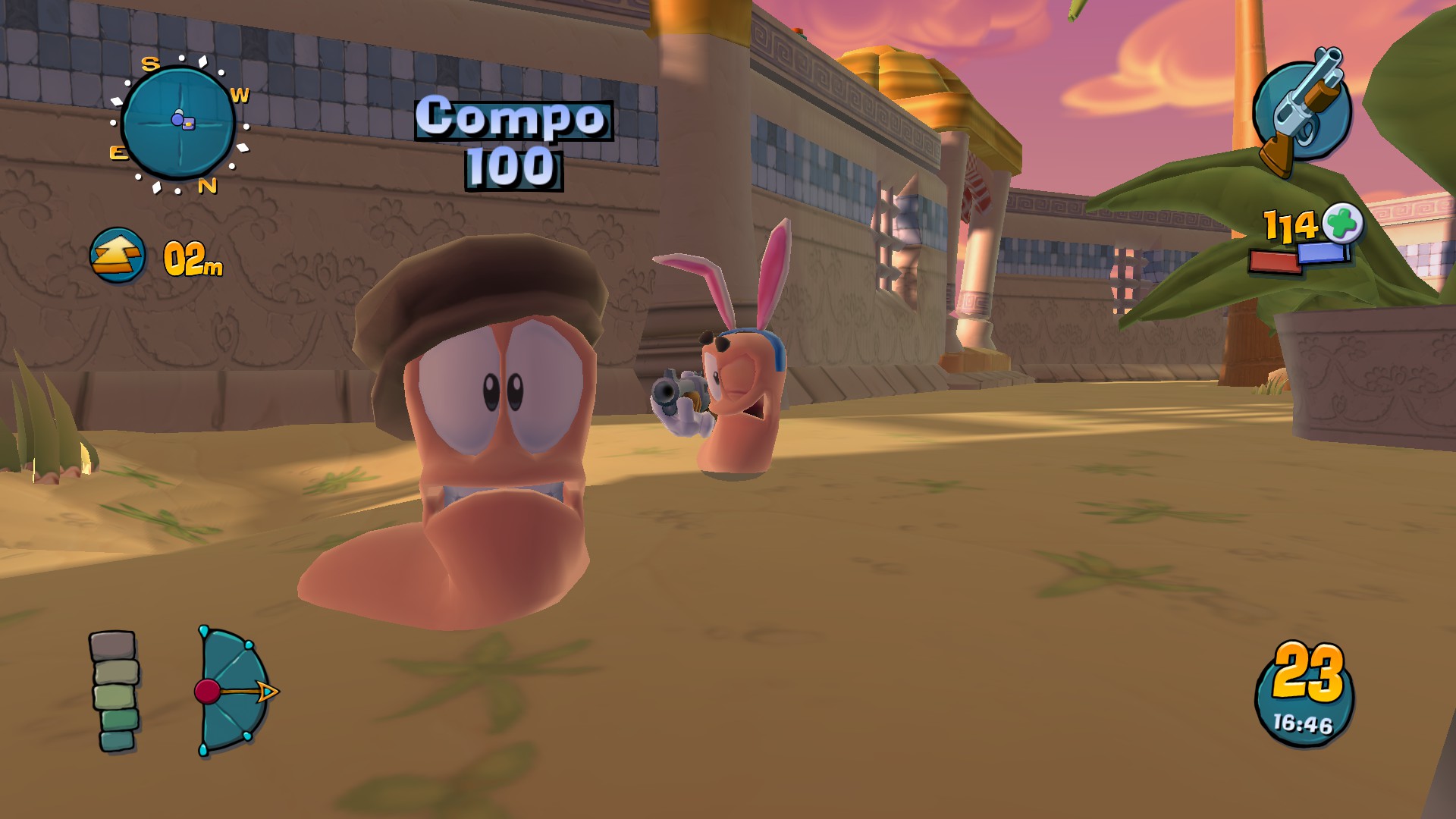 “We wanted to bring back the best 3D version of Worms we could and update and add to it in meaningful ways,” says lead designer Gavin Hood. “A large part of the initial focus was to improve just playing the game in 3D, aiming and shooting, navigation etc… So we added new utilities, HUD elements and more options to help players. Some of that came down to simple changes such as redesigned reticules that gave players markings to use as angle markers. Adding picture-in-picture on shots so players can both see the outcome of an action and retreat after their shot and finally adding a ranking system that rewarded good play instead of rewarding pure time investment.”

“I’m proud of the overall product, the suite of changes and improvements all worked together to make it feel more than a simple re-release,” adds Hood. “An addition I’m most proud of is the shared game integration we added.” This feature checked the player’s PC or console for save data from other Team17 games and unlocked additional related content. It even included an entire stage based on 2009’s Alien Breed Evolution. “It’s something really different and rewards players that are fans of a company not just an individual game. I think it was a really cool feature to give players…”

Worms Ultimate Mayhem remains the final 3D Worms game. Who knows if we’ll return to the formula again in the future. Until that day, Ultimate Mayhem is still available on Steam, and yes… It will still unlock the extra content if you have other Team17 games in your library!

“In all honesty, I don’t remember how this came about,” admits Worms Crazy Golf designer Jax Li. “There were always a bunch of ideas floating around on how Worms mechanics could be utilised in other genres. It just so happens that Worms Crazy Gold made the cut!” 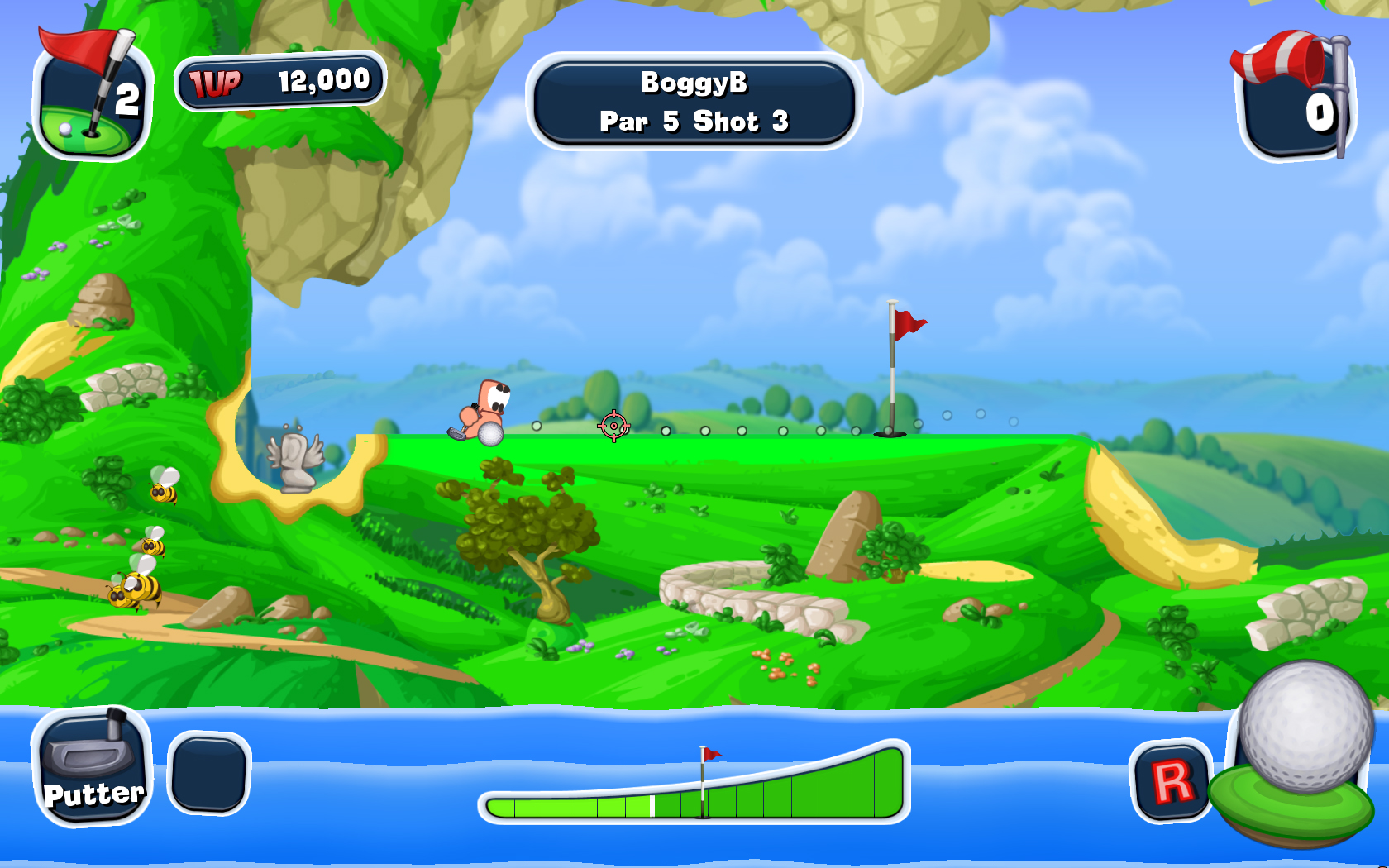 In hindsight, the idea makes a lot of sense. Take the core artillery mechanics at the heart of every Worms game – power, aim and wind direction – and apply them to a sport that also revolves around those basic principles. Then throw in a bunch of silliness and humour for good measure!

“Many of the levels had what you’d call ‘set-pieces’ integrated into them, so if you hit a specific shot you could set off a chain reaction and get a ton of points,” adds Li. “It was pretty satisfying seeing players make shots that you’d designed into the level.” And critics seemed to find the design equally satisfying. IGN’s Keza Macdonald, for example, awarded the game a 9/10 and called it “ridiculously addictive stuff, especially when you realise that the real point of the game is figuring out how to manipulate each course to get a hole in one rather than just muddling through.”

“I remember spending a lot of time drawing the levels out with pencil and paper,” says fellow designer Mark Dimond. “It was a really good way to figure out how it would all fit together before we created a simple Photoshop template that could be played and refined in-game. The artists would then do their magic by using these templates as a guide when it came to creating the final look for each course.” Jax Li, however, remembers the level design process being a little less harmonious… “I do remember fearing the wrath of a certain artist each time we used his artwork in a way that we weren’t supposed to! The pieces that we used to construct the courses came from a whole level chopped up and therefore each piece was lit in a certain way. It was almost like this artist could hear us rotating the landscape pieces from 20 feet away and before you knew it, he’d be casting a huge shadow over your desk and the imminent threat of death!”

Eight years on, the dust having settled, Li looks back on Worms Crazy Golf fondly. “It’s not actually that crazy is it?” he asks. “Sure, the odd Old Woman gets hit in the face with a golf ball every now and then, but it’s actually quite a chilled-out experience on the whole. You can take your time, enjoy the scenery and the music is pretty nice too.”

Worms for Facebook?! Yep! It really did happen. Though the game was long since removed from the platform, there was once a free-to-play Worms you could play in a browser against other people in your social network.

Getting Worms to run in a browser, on a platform that was never initially built to support games, was no easy task! “The most difficult thing was translating the hardcore Worms mechanics over to a social platform,” recalls assistant producer Bob Makin. “All our research showed that you had to get players in with just three mouse clicks and under 10 seconds, otherwise they would just move on to the next game! It was a difficult task which went through many, many iterations. We had to test with all sorts of player groups to make sure it was right and even then we had to watch the analytics and tweak after the game went live.” 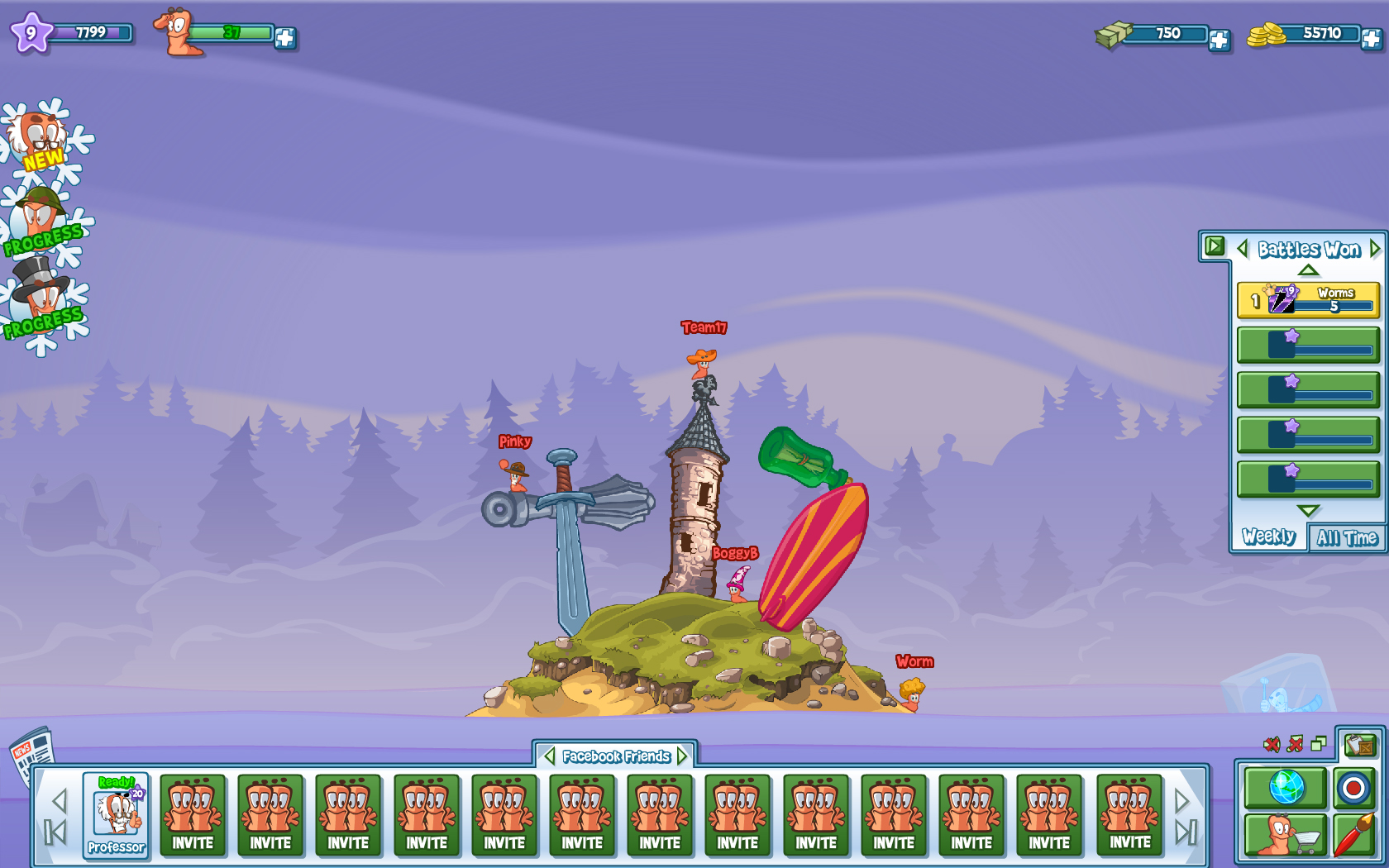 “The biggest limitation that we had is that randomly generated landscapes, one of the cornerstones of Worms, was a big no-no because the game was made in Flash,” remembers designer Jax Li. “We couldn’t not have randomly generated landscapes so we came up with a sneaky workaround. We ended up splitting the landscapes into 4 sections and each section had multiple variants that stitched up with the section next to it. Code would then randomly pick the variants and that is how we ensured that the landscapes always looked different from game to game. Worms for Facebook is the only version that ever did this as far as I know!”

Worms for Facebook was also Team17’s first free-to-play game, which brought its own unique challenges. “We were happy with the way that the game played – movement, aiming and firing felt pretty so

lid – but making the game engaging and valuable enough for players to part with their money for in-app purchases was a different beast altogether. The nature of the game meant that there was a constant fear of the dreaded ‘pay-to-win’ scenario. As players could buy consumable weapons with real money, we also had to make sure that they could also obtain weapons via other means such as grinding, daily rewards or completing challenges.”

“This was right at the beginning of the ‘games as a service’ style of development,” says Dimond. “As well as creating the entire Worms experience online, we had to create an events road map and plan content for each one. The ultimate aim was to have weekly updates, whether it be new map styles, weapons or hats, or a grander update with new modes and levels. We’d even discussed cross promotion with other Team17 releases. Superfrog and Alien Breed were getting remade at the time and we looked at getting some hats and weapons based on those titles into the Facebook game.”

Ultimately Worms for Facebook didn’t last. Facebook gaming went in a more casual direction and as smartphones grew in dominance, the desktop design of Worms became redundant, and the service was eventually discontinued. Despite this, the team remains proud of its achievements. “I’m most proud of the fact that we pulled it off and got it released,” says Dimond. “Our ragtag team of newbies and old-school Teamsters pulled off something that some thought couldn’t be done. It may have been short lived, but getting a great Worms experience on the Facebook platform was a huge design and technical success story. Most Facebook games of the time were nothing more than ‘click to collect’ experiences, whereas we had live multiplayer with real time Worms battling!”

“We were first inspired by early screenshots of LittleBigPlanet,” recalls lead designer Kevin Carthew when asked about the new art style. “We liked the idea of the worm being in a human sized world, and it wasn’t something we’d explored consistently before. We also wanted to make a version of Worms that used the graphical power of the PS3/Xbox360; a proper triple-A Worms experience in terms of looks and features. We knew that would help the game stand out against previous versions in video and screenshots. We wanted the 2D gameplay, but we really wanted it to grab attention; so all of these factors contributed to the game being 2.5D.” 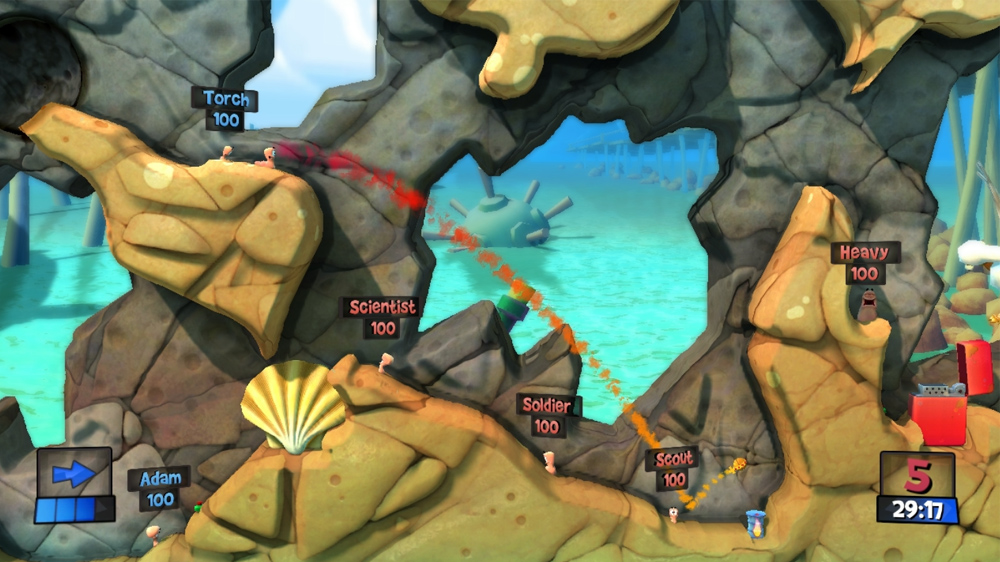 As well as the change of setting and graphical style, Worms Revolution also overhauled the worms themselves, splitting teams out into distinct roles like the “heavy”, “soldier” or “scientist”, each with their own visual design and gameplay. For example, the “scout” class could move and jump quicker than the others but had less powerful attacks. “We thought it was a good way to increase the depth of the game’s strategy without making it more complex to control,” explains Carthew. “Our initial plans were to take this much further, by having worms in your team that you could level up and add specific skills to – but it became too much to balance, and the game became too complex to read. It took away from the game more than it added to it, and so levelling up individual worms was dropped in favour of keeping worms with unique abilities.”

One of the more memorable and unusual additions for Worms Revolution was a professional voiceover from comedy actor Matt Berry (The IT Crowd, Garth Marenghi’s Darkplace) delivered in the style of a nature documentary! “Getting the chance to work with Matt Berry is still one of my highlights at Team17,” says lead audio designer Oli Wood. “It was great to get LittleBigPlanet writer Dean Wilkinson on board to write the script. Dean is a huge Matt Berry fan and his writing style really suited Matt’s delivery. Looking back, I’m not sure how I kept my concentration on engineering the VO. The session was hilarious!

Matt was a true professional and really knocked it out of the park. When the first batch of voiceover was implemented in-game, I remember playing the first campaign mission with the biggest smile on my face. Matt’s voiceover added an extra level of polish to the game and I am still very proud of the results today.”

“Everyone on the team did a great job,” concludes Carthew. “There was a lot of bespoke tech in the game, such as the dynamic water and the destructible 2.5D terrain. These features, added to the physics objects and the classes, meant we had to deliver on lots of things brand new to Worms in just a single release. It came out and it reviewed well, and it still has a number of people playing it today.”

That’s all for 2011 & 2012! Join us in the next chapter when we’ll take a trip back to 2013, a year of, among many things, remakes! With shiny new interpretations of both Alien Breed and Superfrog.

While you wait, why not check out our previous history chapters, starting in 1991 or tell us your favourite T17 game by using #100Team17 on Twitter!