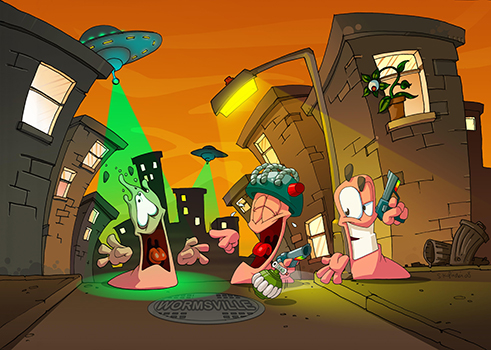 Welcome to the latest chapter in our history of Team17’s first 100 games, celebrating the release of game number one hundred, PLANET ALPHA. In this chapter, we’re looking back at 2007 & 2008, when Team17 began to explore the world of digital distribution on PlayStation Network and Xbox Live Arcade as well as the burgeoning motion control craze with Nintendo Wii exclusive, Worms: A Space Oddity.

A few months after we remade Lemmings for PSP and PlayStation 2 we were back at it! This time in a download-only sequel for Sony’s fledgling PlayStation Network on PS3. 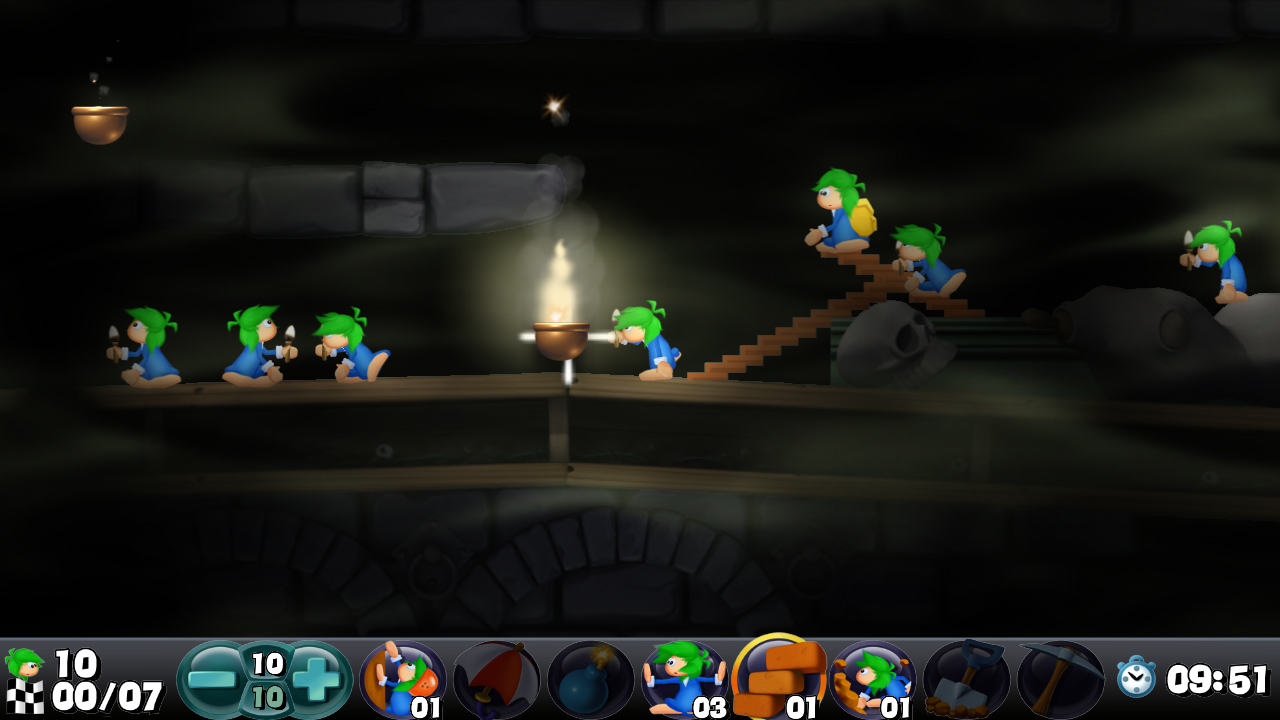 Originally announced as “Lemmings 2”, the PSN release was a full sequel, complete with all-new levels and new features such as the need to collect Lemming abilities mid-level. For Team17 design, John Eggett, this was his opportunity to branch out from the original design and some ideas of his own to the classic formula. “I added a few extra features but was very wary of breaking something so fine tuned,” says Eggett. “I limited my changes to tweaks such as collectible abilities on the landscape, teleporters, cloning pods. These I thought contributed without changing the core game.”

PS3’s Lemmings was Team17’s final game in the series, but the design experience learned from working on the series… That was put to good use on Flockers. Check back soon for more on that!

By 2007, it’s fair to say that the digital revolution was only just beginning. Steam had been around a few years, the iPhone was just around the corner and Xbox Live was well established on Xbox 360. It’s on this platform that we decided to take Worms back to its roots, with an accessible 2D game that could be sold at an affordable price and take up only a small amount of hard drive space.

Essentially a HD port of PSP’s Worms Open Warfare, the simply titled Worms could almost be regarded as an experiment. It’s hard to appreciate now, but the idea of players paying for downloadable software was still a relatively unproven concept. But it didn’t take long for the results to speak for themselves. The Xbox Live Arcade release was a smash hit! 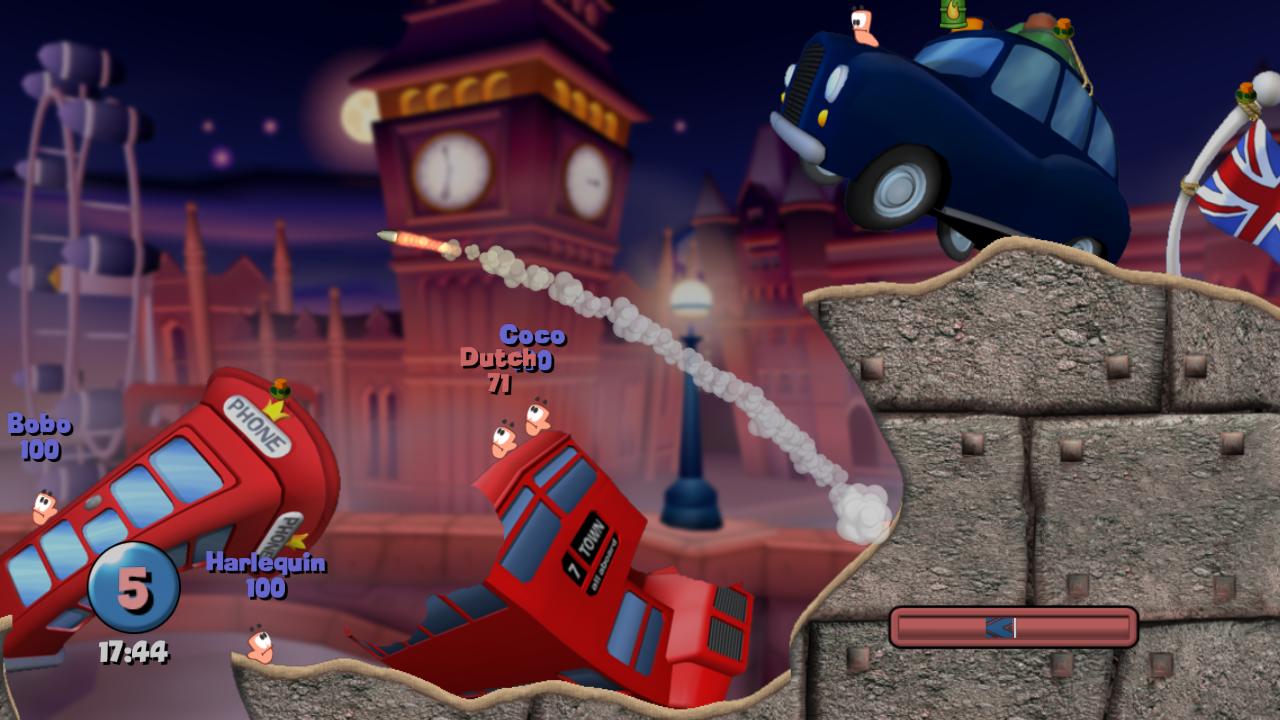 In 2009, Worms was ported to both PlayStation 3 and smart phones. Re-designed for touch screen controls, the game translated remarkably well to iOS and Android and in the process found a whole new level of success. The combination of the smartphone explosion, low price point and brand familiarity made Worms a phenomenon yet again and started a whole new mobile sub-series for the franchise.

But the success of Worms wasn’t just limited to the series… Its success proved the viability ot digital distribution and self-publishing, paving the way for a bold new era of Team17 that was just around the corner!

With a little more time to work on the sequel, Worms Open Warfare 2 was generally considered by the team to be a superior game, and critics seemed to agree. Praise was high, particularly from GameSpy who called it “the best Worms game yet”! 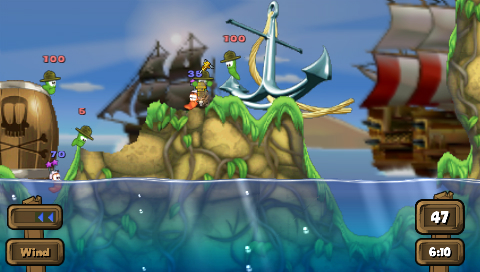 More a polished iteration of what had come before, rather than a reinvention, Worms Open Warfare 2 did nevertheless contribute some important additions to the series. The “Bunker Buster”, designed to drop right on in cowardly darksiders hiding in tunnels, has pretty much been a staple of the series ever since, while the “Buffalo of Lies”, previously only mentioned in classic Worms games, finally provided a counterpart to the Concrete Donkey and rewarded longtime Worms players, hungry for a bit of tasty lore.

Packed full of little features to keep wormers happy, one of Open Warfare 2’s smartest additions was one that looked all the way back to the original Amiga game. A level editor! A little bit like the Graffiti mode in Worms: The Director’s Cut, this feature allowed players to sketch the outline of a landscape and then populate it with landmines for an instant, unique stage that could even be shared with other players. A nice touch, even if we do say so ourselves!

At the request of publisher THQ, a space theme was chosen for Worms: A Space Oddity, influencing every element of the design from the alien environments to the space helmets on each worm and a sci-fi twist to each classic weapon. For example… The Sheep wasn’t just a “Sheep”, it was a “Robo-Sheep!”

As for the motion controls, the Wii had been insanely popular around 2006-2008 thanks to the simplicity of control offered in Wii Sports, and this inspired lead designer Kev Carthew to come up with a range of unique motions to activate, aim and dispatch the worms’ weapons…

“My original intention was for the Wii Remote to do what Wii Sports did, and remove the barrier to the game’s interface,” says Carthew. “I wanted the player to be able to just throw the grenade. We had one prototype that I felt did this perfectly, if the player used the Remote in a very specific way. You had to make a movement a bit like throwing a Frisbee. After a lot of prototyping we got it working accurately, and I and a few others were able to replicate shots perfectly. But when we user-tested it, absolutely nobody made the gesture the way we wanted them to! We couldn’t explain it well enough in the game either, so this completely killed my original aim. We ended up instead treating each weapon instead like its own sort of gesture based micro-game. It was fun enough, but I wasn’t completely satisfied with how it turned out.”

Carthew explains that tight deadlines restricted what was ultimately possible on Worms: A Space Oddity. A few quirky ideas to expand on the sci-fi setting had to be abandoned as motion control design dominated the production schedule, while the plan for online play – announced in the very first press release – was sadly not implemented in time for release. “The publisher wanted it out by a specific date, and that was the end of that,” says Carthew. “It was a real shame, the game would have been a much better experience with online multiplayer.”

Getting A Space Oddity finished under strict deadlines is ultimately what Carthew is most proud of. “I designed all of the mini-games in one week,” he recalls. “They all had to be 1 – 4 player couch co-op, and have a decent chunk of content each. They turned out with varying degrees of success, but some of them were fun to play with friends, and some of the ideas were pretty unique.”

That’s all for this chapter. We really hope you’ve enjoyed this snapshot of Team17 history. In the next instalment, we’ll look back at 2009,the year in which Alien Breed made its long-awaited return and we got to work on another classic Amiga IP too! Check back soon to find out what that was!