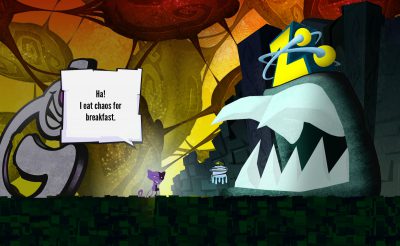 We’re really excited to announce our latest covalent bond with independent developer Italic Pig to turn Schrödinger’s Cat – quantum physics’ favourite dead-&-alive feline – into an electron-kicking, puzzle-solving action hero. Together we’ll be bringing Schrödinger’s Cat and the Raiders of the Lost Quark – a fast-and-furious, action-adventure, platformer-puzzler-punch-up of subatomic proportions – to Steam in Q3 2014.

Cooked up by the team behind the gritty, grown-up point and click trilogy Hector: Badge of Carnageandfeaturing the voice talent of the brilliant A.J. LoCascio (known for his role as Marty McFly in Telltale Games’ Back to the Future), Schrödinger’s Cat and the Raiders of the Lost Quark is part combat-platformer, part logic-puzzler, part open-world explorer, part character-driven adventure! It’s only appropriate that a game starring Schrödinger’s Cat can be many things at the same time.

Set in The Particle Zoo, a catastrophic event has caused all enclosures to open and all the primitive particles to escape! What used to be a cheery theme-park style environment is now utter chaos, and not in the mathematical sense of the word. The Zoo is put on lockdown, and the emergency services are called in to sort everything out. Those emergency services: Schrödinger’s Cat, of course.

Schrödinger’s Cat needs to get the Particle Zoo back in order quick sharp, but thankfully he’s not alone; by collecting and commanding an army of cuddly quarks, he can combine and create useful bits of temporary matter (platforms, copters, bubbles, grenades, etc.) to combat and subdue the quarkivorous leptons, kleptomaniacal gluons and cantankerous bosons now running amok.

At its core, Raiders of the Lost Quark is a cheerful, colourful and quirky adventure game that anyone can enjoy, from noobs to Nobel prize winners, with no pre-requisite reading required… honest. If it inspires you to spend some time on Wikipedia afterward, that’s your business.

Schrödinger’s Cat and the Raiders of the Lost Quark is scheduled for a Q3 2014 release on Steam.

Thanks and have a fantastic Easter Weekend!