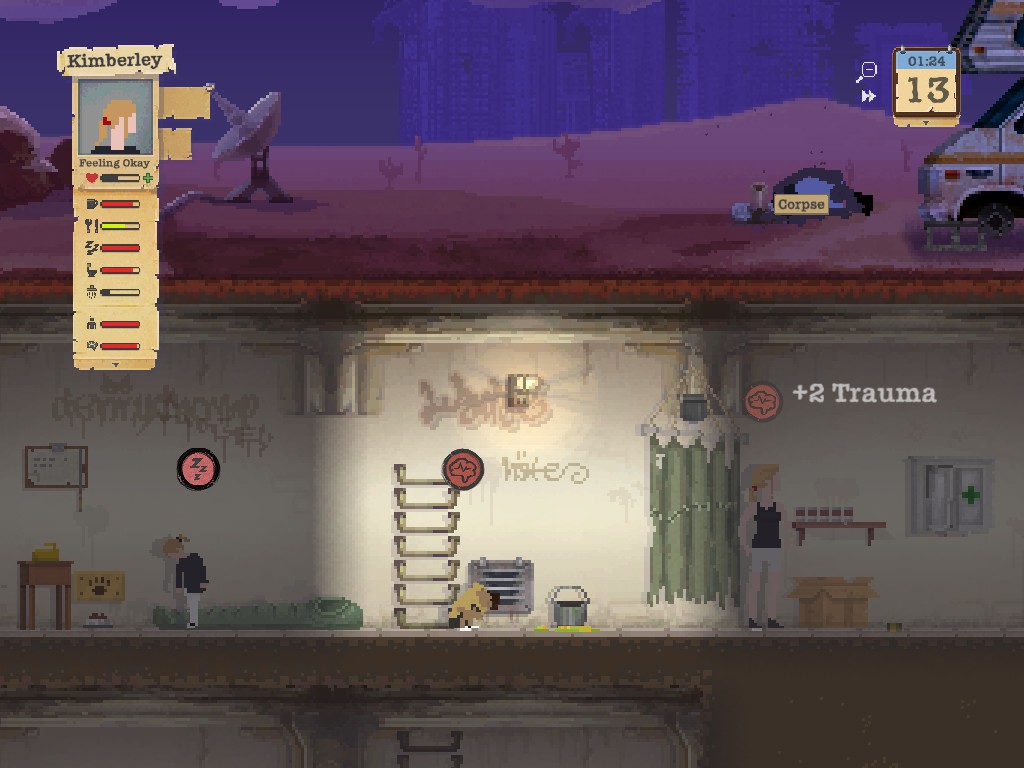 It’s time for a huge update… even bigger than the pile of bodies in the soil above your shelter.

We’ve been chuckling over your awesomely dark stories and they’ve inspired us to add some exciting new changes to Sheltered. You’ll now be able ‘end the suffering’ of a catatonic character (yep, it’s exactly how it sounds…). And when you’ve got all those bodies and barely any food, what is there to do but a little bit of ‘harvesting’? Good job we’ve now changed it so that characters will also become desensitised after rampant cannibalism. Dig in!

• Characters become desensitised to cannibalism after repeated harvesting of corpses.
• Characters can end the suffering of another catatonic character.
• Other family members can continue crafting objects that other character has started.
• Binoculars and Metal Detectors are now craftable.
• Rat Traps are now craftable.
• Characters now explain why they are unable to use punching bag due to them being tired.
• Lumber Yard is now a discoverable location on the map.
• New art for shelter visitor interface.
• Audio feedback added to notify player that third task given to character is not registered.
• Various actions now have sound effects.
• Locations now have their available items randomised periodically.
• Increased number of scrap yards that can be found.
• Added sound effect for cycling between characters.
• Added audio to encounter results.
• The journal will now reflect characters becoming desensitised to murder after repeated killings.
• Added new background images for the following locations:
– Bank
– Lumber Yard
– Factory

• Tier 2 shower now uses correct icon at Work Bench.
• Players can now scroll through their storage inventory.
• Characters no longer become stuck when two parties return from an expedition at the same time.
• Added several missing translations.
• Parties no longer become stuck at locations when 2 separate parties radio in at the same time
• Player can now scroll through storage inventory when storing items found during expedition.
• Experience gains and level ups for characters on expeditions no longer appear at top left corner of shelter view.
• Occupied graves now save correctly after game is exited.
• Increased experience received from using punch bags
• Increased experience received for winning in combat
• Catatonic characters no longer have a text string in their hover over state.
• Limited the number of clothing colours available to NPCs to prevent odd coloured garments.
• Bucket Toilet now consumes less water when cleaned.
• Changed the stats for characters that are recruited at the shelter so they are similar to those found in the wasteland.
• The Journal can now be closed with the ‘X’ button
• fixed not being able to close the “locations searched” summary panel
• fixed several instances of overlapping text labels in other languages across various panels
• Fixed “owned” count of tools, food, water, books, toys and records when in the item transfer panel
• The jukebox now works and plays music

We’ve been overwhelmed with all the feedback and crazy ideas for the way we can take this game forward. Your ideas continue to shape the game, so it’s super important that you keep them coming!