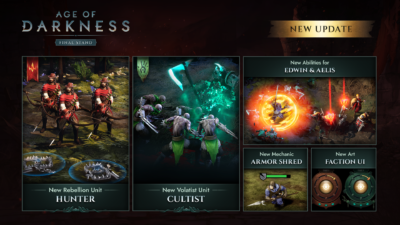 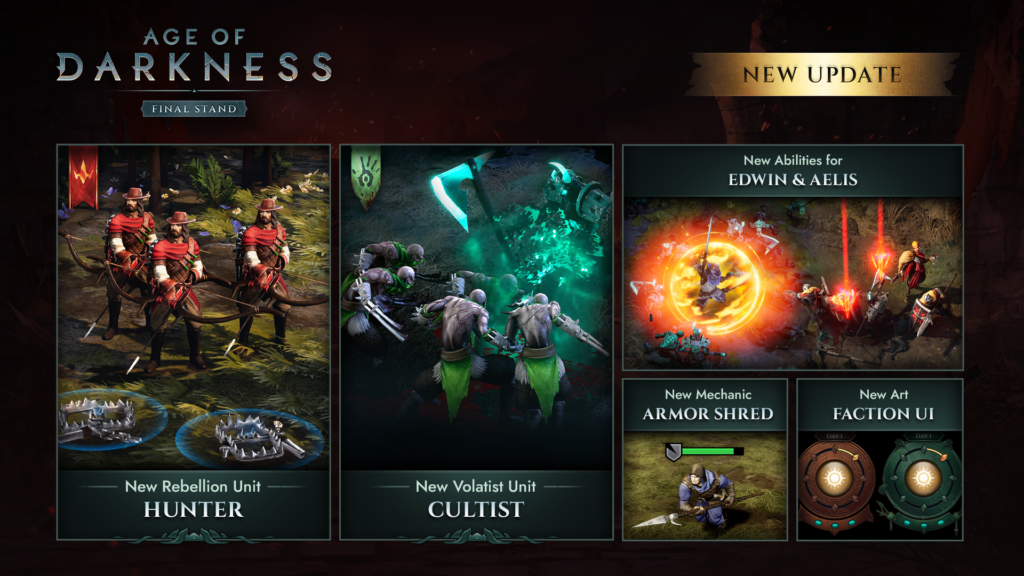 The light continues to grant blessings, and this time it has granted the Rebellion and Volatists Factions with a new Unit each to aid your crusade against the Nightmare plague that corrupts the lands.

The Cultist, a new Melee Unit for the Volatists that replaces the Soldier Unit. These crazed fighters work best in numbers, and can be just as deadly as they look. The Cultists are a low cost unit and have the benefit of training 2 Units for the Gold and Wood cost of 1. They have a very appealing Armour Shredding value compared to their cost and they are quick to train, these defenders can help facilitate early and rapid expansion.

For the Rebellion, the Hunter Unit replaces the Arbalest, but packs an extra punch with their specialised trap ability. They are first and foremost a range Unit, however they are able to utilise some stealth tactics and lay down traps at their feet that are invisible to enemy Units. Once an enemy sets off the trap, to add salt to their wounds, a noxious gas is released which damages and slows down Nightmares while the Hunters sit back and continue to wrack up their enemy count.

Since 2 of the valiant Factions have received new Units, it was only fair that the Order was gifted a unique Unit of their own. Although it may not be new like the latest additions, the Catapult is now an Order specific Unit.

Edwin and Aelis have levelled up their skills and both have been bestowed with a new ability each. Edwin’s Flame Shield Ultimate ability engulfs his body in flames, adding a shield that absorbs damage. Once the shield’s health has been depleted or the ability timer runs out, it will explode, causing damage to nearby targets. With Aelis’ Royal Decree Passive, if our Queen were to die while a Loyal Guard was alive, the weakest Loyal Guard will die instead, and Aelis will heal for 40% of her max health. While this skill is not on cooldown, Aelis Condemns enemies she hits, causing them to take 15% more damage from other sources.

As always, as the light has gifted the Factions with new loyal warriors, however to make the playing field even, Units, Nightmares and Buildings have had their Armour fortified. While something has Armour, it will take significantly reduced damage. To remove armour entirely, a Unit must inflict Shred Damage to the target. Each point of Shred Damage removes the same amount of Armour Once that has been expended, the target will take full damage from all sources.

We have continued to make improvements in the name of the light, Factions now have their own unique UI, along with balancing changes and multiple bug fixes.

A fix for these issues will come in a future update.